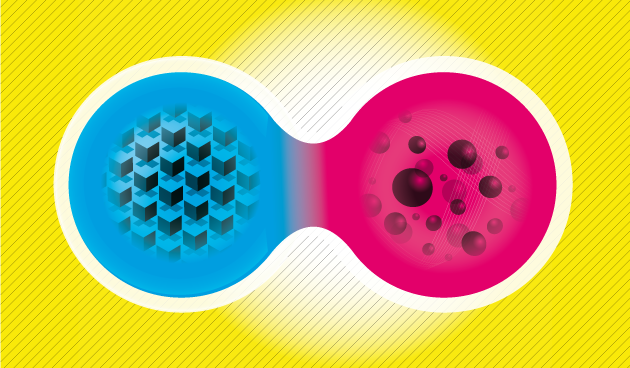 Until just a short time ago, the boundaries of biology were set by nature. But those limits are receding. In the past decade, the field of synthetic biology has shattered the idea that living cells must stick to the biomolecular widgets that have evolved naturally. Synthetic biology — a more complex form of genetic engineering — allows researchers to assemble molecular gears on an entirely new scale. From such tools, biological freedom has emerged; even the rule that DNA's alphabet consists of just four letters has been thrown out of the window.

In this special issue, Nature surveys the messy landscape of synthetic biology and the various scientific tribes that are pushing it forward. Although the field is young, it is already divided into factions that foresee different futures.

A News Feature on page 152 investigates the schism between those who advocate free-for-all tools, such as open-source repositories, and the groups that seek to protect the fruits of research using legal instruments such as patents (see also Editorial, page 133). Volker ter Meulen follows that theme on page 135, highlighting the threat of excessive regulation in the field. On page 155, experts diagnose the discipline's biggest challenges and suggest solutions through building bridges across scientific and cultural divides. A News & Views Forum on page 166 debates the merits and drawbacks of engineering useful features into cells by fashioning genetic circuits directly or through successive rounds of screening and selection. And on page 168, Daniel G. Gibson and J. Craig Venter describe the research power of a synthetic yeast chromosome built to scramble genes and then probe which combinations can keep cells growing.

Even the most basic building blocks of biology are being remodelled. On Nature's website, Denis A. Malyshev and co-authors describe a cell that propagates with unnatural nucleic acids in its DNA (D. A. Malyshev et al. Nature http://dx.doi.org/10.1038/nature13314; 2014). As explored in an accompanying News & Views article, this kind of expanded genetic alphabet might eventually allow the regulatory functions of DNA to be more precisely engineered, or permit new types of amino acid to slip easily into designer proteins (R. Thyer and J. Ellefson Nature http://dx.doi.org/10.1038/nature13335; 2014). Two of Nature's sister journals, Nature Methods and Nature Reviews Microbiology, are also exploring applications and advances in synthetic biology. Together, the package of reports and commentaries provides a broad overview of how synthetic biology will be building bridges and pushing limits for decades to come.