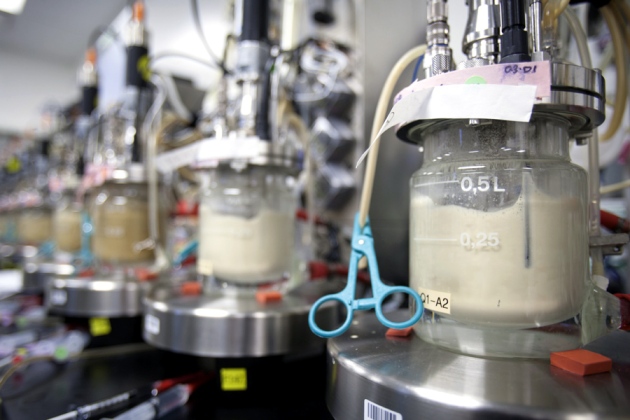 Peter DaSilva for The Washington Post via Getty Images

Yeast strains are engineered at Amyris of Emeryville, California, to produce alternatives to petroleum-based chemicals.

Synthetic biologists have a vision. Researchers in this young field, who build ‘devices’ from engineered genes and other molecular components, imagine a future in which products such as drugs, chemicals, fuels and food are manufactured by microbes. These devices could even be wired up to create cellular computers, much as electronic transistors are wired up to make microprocessors (see Nature http://doi.org/3fz; 2013).

But if the dream is to be realized, those components need to perform more consistently and be more reproducible than they are now, especially as they move from the lab bench to the biofactory. Unlike silicon-based electronic devices, synthetic organisms assembled from genetic components do not always have predictable properties — at least not yet.

On 31 March, representatives from industry, academic institutions and government met at Stanford University in California to launch the Synthetic Biology Standards Consortium, an initiative led by the US National Institute of Standards and Technology (NIST) to address issues preventing the field from reaching its potential.

“It’s the signal of a maturing industry,” says Patrick Boyle, who oversees the organism-design pipeline at Ginkgo BioWorks, a synthetic-biology company in Boston, Massachusetts. “As we get better at synthetic biology, we want to make sure we are comparing apples to apples.”

The standards push comes at a pivotal point for synthetic biology. Ginkgo BioWorks is one of several ‘foundries’ set up to mass produce organisms for various uses. Others include Amyris Biotechnologies and Zymergen, both in Emeryville, California, and publicly funded initiatives in the United Kingdom and the United States. Massive firms — and potential customers for these foundries — are showing interest in the field. The chemical manufacturers Dow and DuPont, the US defence-technology giant Lockheed Martin, the drug maker Novartis and the Dutch health and materials-sciences company DSM were all represented at the NIST meeting.

Participants divided into work groups to brainstorm what standards would make it easier for synthetic biologists to share methods, materials and information. The groups concentrated on a wide range of topics, including standards for automating methods, describing and assembling components and documenting the performance of engineered bacterial strains. One group considered how to demonstrate the safety of commercial synthetic-biology products. Another worked towards calibration methods for flow cytometry, a widely used technology for counting and sorting cells.

Each working group will now carry its ideas forward. NIST will provide support for these efforts, but where they go is up to the researchers.

Like most life-sciences fields, synthetic biology faces issues with reproducibility (see Nature 515, 7; 2014). It has proved difficult for labs to replicate strains engineered by others, which is hampering progress in industry and in academic research. One lab may not provide enough information about how a part was made for another to reproduce the work. Or researchers may toil to refine a process, only to find that the developer has already done that work without reporting it in the literature.

“It’s just difficult to know all the information out there, because there isn’t a set of standard ways to describe what we know about a biological resource,” says Ryan Ritterson, a synthetic biologist at the University of California, San Francisco.

Synthetic biologists who work in industry pushed for standards that would simplify commercial decisions. For instance, organisms that make products well in the lab do not always work when grown to bigger scales. Boyle advocated the development of ‘reference strains’ whose behaviour has been characterized in different types of fermentation equipment and growth media. This is particularly important to companies that want to understand whether variations in manufacturing efficiency stem from the organisms or from external factors.

The NIST-led effort is not the first attempt at standardizing the tools and methods of synthetic biology. The Synthetic Biology Open Language project is an online consortium that is developing standard nomenclature, symbols and other tools to describe engineered systems. The BioBricks Foundation has designed a licence to facilitate the free exchange of biological parts. And several repositories make and distribute such parts.

But those efforts have addressed only some of the reproducibility issues in synthetic biology. Parts in some of the repositories do not always work or are mischaracterized. Not all companies want to use parts that are in the public domain, or contribute their components to these repositories. And the field has moved on since some of the standards were set; for instance, the standard method for assembling BioBricks can be slower than newer methods for making complex DNA assemblies.

Meeting participants said that they hoped that the NIST initiative’s inclusion of researchers and companies would help it to overcome some of those problems. “We had people coming from different areas who all have different stakes in the outcome,” Ritterson says, “and rather than dividing into factions and deciding what standards would work best in our applications, we had thoughtful conversations about the standards that would work best for the entire community.”