David Schlegel's tool for exploring dark energy, one of nature's biggest mysteries, is deceptively simple. It is an aluminium plate the size of a manhole cover — or rather, 2,200 of them, each with a specific pattern of holes drilled to match the arrangement of galaxies in a particular section of the sky. Every plate is used once, for an hour, at the prime focus of the 2.5-metre telescope at Apache Point Observatory in New Mexico. When the telescope is pointing at the correct spot, light from each galaxy streams through its corresponding hole. The light is then broken up into its constituent wavelengths and used to clock how fast each galaxy is being carried away from us by the relentless expansion of space. 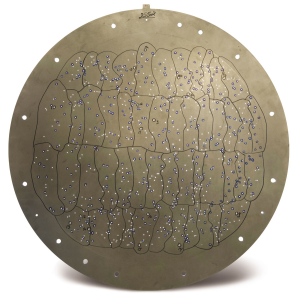 Holes in aluminium plates channel light from individual galaxies to calculate how fast each is receding.

The study, which began in 2009, will ultimately gather data from 1.5 million galaxies. Its goal is to measure dark energy — a phenomenon thought to be driving the Universe to expand at an ever-increasing rate — and discern whether its influence has remained constant or has varied slightly across billions of years of cosmic history. “The more galaxies we get, the better we do,” says Schlegel, an astronomer at Lawrence Berkeley National Laboratory (LBNL) in California and principal investigator of the massive undertaking, known as the Baryon Oscillation Spectroscopic Survey (BOSS).

But BOSS — and the method behind it — is already coming into its own. On 11 January, Schlegel and his colleagues will unveil their initial findings — based on data from 470,000 galaxies — at a meeting of the American Astronomical Society in Austin, Texas. Those data have given them a glimpse of cosmic structure by showing where galaxies clump together, like the crests of giant waves. The structure is a relic of a much younger and smaller Universe, in which acoustic waves reverberated through the dense, hot plasma that had not yet cooled enough to form stars and galaxies. These waves, called baryon acoustic oscillations (BAOs), pushed matter into regions of high and low concentrations with fairly even spacing — a pattern that evolved, in later epochs, into the giant sheets and filaments of galaxies that are the largest structures in the Universe.

First detected in 2005, the regular spacing between these structures creates a natural cosmic yardstick1. In today's Universe, that spacing has grown to about 150 megaparsecs (500 million light years). By detecting deviations from this yardstick, BOSS offers the tightest constraint yet on dark energy's influence (see 'Sizing up cosmic ripples').

Surveys of powerful stellar explosions known as type Ia supernovae yielded the first clues to dark energy in 1998. These supernovae are all thought to reach roughly the same peak brightness, allowing them to be used as 'standard candles' to determine the distances to their host galaxies. When these data are combined with measurements of how fast the supernovae are receding, they reveal that the expansion of the Universe is accelerating, rather than slowing down under gravity. One explanation is that dark energy is the 'cosmological constant', a repulsive outward pressure that is innate to the vacuum of space. BOSS is expected to narrow the uncertainty bounds on this model to a few per cent. That's “a factor of a few better than anything we have today”, says Schlegel.

Chris Blake, an astronomer at Swinburne University of Technology in Melbourne, Australia, says that “BOSS will be the state of the art for the next five years, there's no doubt about that”. Blake was co-investigator on the WiggleZ survey, which studied BAOs by mapping almost 240,000 galaxies using the 3.9-metre Anglo-Australian Telescope at Siding Spring Observatory in Australia. That was enough for the WiggleZ team to announce last year that it had verified, independently of supernova observations, that galaxies are behaving as though dark energy exists2, 3.

But none of the probes of dark energy has been able to say with any certainty that dark energy has behaved as a constant throughout the Universe's history. To address this key question, the BOSS team has set its sights on BigBOSS, a survey that would sample a much larger volume of space, observing 20 million galaxies up to 3.1 billion parsecs away, along with 4 million quasars — the luminous cores of even more distant galaxies. This would allow it to trace the influence of dark energy across most of cosmic history and to discern whether it really has remained constant.

In place of BOSS's aluminium plates, which are laboriously positioned and connected by hand, BigBOSS will rely on an automated system that can manoeuvre fibre tips into precisely the positions needed to gather the light of distant galaxies. The collaboration has submitted a US$70-million proposal to the National Optical Astronomy Observatory to upgrade the 4-metre Mayall telescope on Kitt Peak in Arizona and begin five years of observing in 2018.

Schlegel says that BigBOSS would exceed the BAO-measurement capabilities of much more expensive space missions aiming to study dark energy, such as NASA's proposed $1.6-billion Wide-Field Infrared Survey Telescope. “BigBOSS scoops a lot of what we thought we had to go to space for,” he says.

The rise of BAO experiments such as BOSS and WiggleZ comes just as the statistical power of supernova studies is flagging as a result of uncertainties about how consistent the explosions really are. Moreover, the BAO method has more to offer — in addition to measuring the separation between vast clusters of galaxies, it can help to tease out how gravity affects galaxies within the clusters. “We can see the flows of those galaxies into those clusters,” says Blake.

“The BigBOSS survey would trace the influence of dark energy across most of cosmic history.”

This could rule out the possibility that dark energy is something other than a cosmological constant — for example, a change in general relativity at large scales. “It could be that there's something funny going on with gravity,” says Josh Frieman, an astronomer at Fermilab in Batavia, Illinois.

Frieman's own tool for finding out is weak lensing, which measures how the gravity of large clumps of matter subtly distorts the shapes of more distant galaxies. Frieman is leading the Dark Energy Survey, which later this year will begin taking pictures of 300 million galaxies with a 570-megapixel camera installed at the 4-metre Blanco telescope at the Cerro Tololo Inter-American Observatory in Chile. But atmospheric blurring, which has hampered earlier efforts to map weak lensing with ground-based telescopes, could prove to be a challenge.

Because the BAO method requires only a galaxy's spectrum and not a high-resolution image, atmospheric blurring isn't as much of a problem. And the same data that BigBOSS would gather to identify the BAO effect on large scales can also be used to observe what gravity is doing around individual clusters of galaxies.

Saul Perlmutter, the LBNL astronomer who shared a Nobel prize for the discovery of cosmic acceleration, says that even if BigBOSS doesn't reveal the nature of the effect, it is bound to deliver some unexpected pay-offs. He points out that his own supernova survey — one of the two that led to the initial discovery — was originally expected to measure the deceleration of the Universe due to gravity. “We're on a roll,” he says. “We have to keep pushing.”