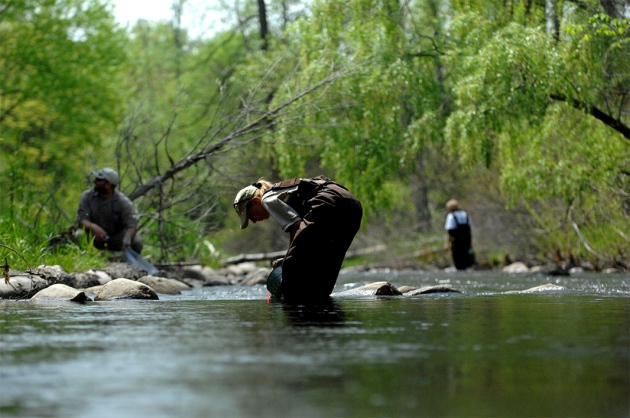 The number of scientists who report conducting purely fundamental research in Canada dropped from 24% to 1.6% between 2006 and 2015, according to a survey released on 28 June. The analysis reveals researchers’ frustration with the country’s long-term shift towards the support of applied research over basic science.

The survey was conducted by the Global Young Academy — an international organization made up of 200 early-career scientists that was founded in Berlin in 2010 as a counterpart to national senior-scientist academies. Academy member Julia Baum, a biologist at the University of Victoria in Canada, spearheaded the investigation, which compiled the views of more than 1,300 Canadian researchers who completed an online survey.

“Every academic can unequivocally tell you that the landscape of funding for basic research in Canada has been changed and damaged beyond recognition over the past decade,” said an anonymous survey participant, according to the report.

The results hammer home the message of the Fundamental Science Review, a report commissioned by the federal government that was released in April: Canada is investing too little in basic science, and is falling behind internationally (see 'Downward trend').

Canada is the only G8 country where research investments as a proportion of gross domestic product have shown a clear downwards trend, the report notes, from nearly 2% in 2005 to 1.6% in 2014. “That’s pathetic,” says Baum. Basic researchers in the country have also faced a 35% drop in available funds per person since 2013, she says: the number of researchers has increased but funding and the number of available grants hasn’t kept pace. 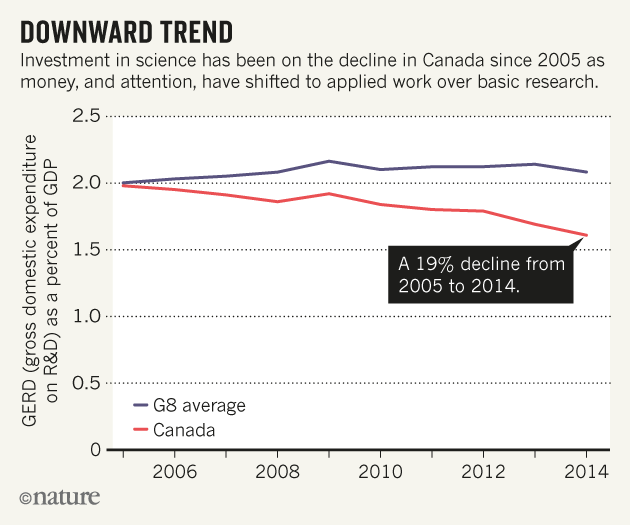 These long-term declines in funding have left researchers dispirited, says Baum. “These scientists felt Canada used to be a wonderful place to do research,” she says, but that it’s no longer the case for their students. “Science is no longer seen as a viable career option.”

The report recommends a baseline rise of Can$459 million (US$352 million) to the country’s three main granting bodies, which fund the natural, health and social sciences. That would give researchers the same level of support they enjoyed, per person, in 2005. This is in line with the Fundamental Science Review’s recommendations.

Canadian researchers hold out hope that the left-centre Liberal government, which was elected in 2015 with a pro-science platform, will bring change. More than two-thirds of survey respondents said that they think that fundamental research is important to the federal government.

But scientists haven’t seen much money mobilized in this direction yet. The Liberals gave Canada’s three main granting bodies a much-needed Can$76 million boost in their 2016 budget — but in an unusual and controversial move, didn't increase their budgets in 2017.

Science minister Kirsty Duncan told Nature that she is working to improve things for researchers in Canada. She will be moving ahead with some of the Fundamental Science Review’s recommendations, including formalizing coordination between the granting councils and forming a review panel for big international science projects. She will also be introducing legislation to fix the leadership of the health-research granting agency. But “I can’t undo ten years of cuts in one budget cycle”, Duncan says. “That’s going to take time.”