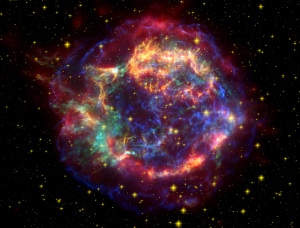 Oceanic sediment contains an iron isotope that ancient bacteria accumulated 2.2 million years ago when debris rained on Earth from a supernova explosion. Shown are the remnants of a much younger supernova remnant, Cassiopeia A, shown in a composite image from three NASA observatories.

Sediment in a deep-sea core may hold radioactive iron spewed by a distant supernova 2.2 million years ago and preserved in the fossilized remains of iron-loving bacteria. If confirmed, the iron traces would be the first biological signature of a specific exploding star.

Shawn Bishop, a physicist at the Technical University of Munich in Germany, reported preliminary findings on 14 April at a meeting of the American Physical Society in Denver, Colorado.

In 2004, scientists reported finding the isotope iron-60, which does not form on Earth, in a piece of sea floor from the Pacific Ocean1. They calculated how long ago this radioactive isotope had arrived by using the rate at which it decays over time. The culprit, they concluded, was a supernova in the cosmic neighbourhood.

Bishop wondered if he could find signs of that explosion in the fossil record on Earth2. Some natural candidates are certain species of bacteria that gather iron from their environment to create 100-nanometre-wide magnetic crystals, which the microbes use to orient themselves within Earth’s magnetic field so that they can navigate to their preferred conditions. These 'magnetotactic' bacteria live in sea-floor sediments.

So Bishop and his colleagues acquired parts of a sediment core from the eastern equatorial Pacific Ocean, dating to between about 1.7 million and 3.3 million years ago. They took sediment samples from strata corresponding to periods roughly 100,000 years apart, and treated them with a chemical technique that extracts iron-60 but not iron from nonbiological sources, such as soil washing off the continents. The scientists then ran the samples through a mass spectrometer to see if any iron-60 was present.

And it was. “It looks like there’s something there,” Bishop told reporters at the Denver meeting. The levels of iron-60 are minuscule, but the only place they seem to appear is in layers dated to around 2.2 million years ago. This apparent signal of iron-60, Bishop said, could be the remains of magnetite (Fe3O4) chains formed by bacteria on the sea floor as radioactive supernova debris showered on them from the atmosphere, after crossing inter-stellar space at nearly the speed of light.

No one is sure what particular star might have exploded at this time, although one paper points to suspects in the Scorpius–Centaurus stellar association, at a distance of about 130 parsecs (424 light years) from the Sun3.

“I’m really excited about this,” says Brian Thomas, an astrophysicist at Washburn University in Topeka, Kansas, who was not involved in the work. “The nice thing is that it’s directly tied to a specific event.”

“For me, philosophically, the charm is that this is sitting in the fossil record of our planet,” Bishop says. He and his team are now working on a second core, also from the Pacific, to see if it too holds the iron-60 signal.