You just can’t keep a good superconductor down. An iron-based crystal has been found to regain the ability to conduct electricity without resistance when placed under pressure, breaking the record for the temperature at which superconductivity can survive in the process. But how it does this remains a mystery.

Most superconductors work only at temperatures close to absolute zero. So physicists have been puzzled about why certain materials can superconduct at temperatures approaching 70 kelvin. Liling Sun, a condensed-matter physicist at the Institute of Physics, Chinese Academy of Sciences, in Beijing, and her colleagues have investigated how a relatively new addition to the high-temperature superconducting family, iron selenide, behaves when placed under pressure. “Pressure is a way to tune basic electronic and lattice structures by shortening atomic distances, and it can induce a rich variety of phenomena,” says Sun. 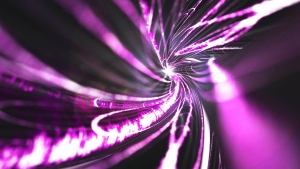 Superconductors usually operate at nearly absolute zero, but a few can keep working as the temperature rises.

Under normal pressure, iron selenide superconducts up to about 30 K, and Sun's team expected that raising the pressure would disrupt this. The researchers squeezed a single crystal of the material, measuring 100 micrometres in diameter and 50 micrometres thick, between two diamond-tipped anvils. At first, they found exactly what they predicted: superconductivity stopped as the pressure approached 10 gigapascals.

Subir Sachdev, a condensed-matter physicist at Harvard University in Cambridge, Massachusetts, says that the bizarre re-remergence effect may be related to the way that 'vacancies' — sites in the crystal that don't have any ions — are shuffled around when pressure is applied. Independent experiments have shown that at normal pressure, a thin iron-selenide sample exhibits a 'split personality', separating into regions that are highly magnetic and contain many ordered vacancies, and regions that are superconducting, but have no vacancies3. “There is already a very drastic contrast between these competing behaviours at ambient pressure,” says Sachdev. “Under high pressures, it looks like something happens to push the magnetic behaviour out, and let superconductivity take over.”

Sun and colleagues now plan to carry out neutron-scattering experiments to show how the structure of a sample changes under pressure, which should help to determine whether the ordering of vacancies, changes in magnetism or another effect is behind the change in behaviour.