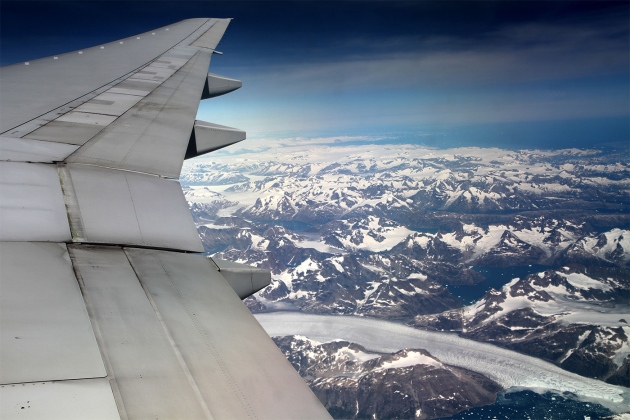 Conventional aeroplane wings are supported by straight bars and struts, but a supercomputer has suggested a more organic design.

Engineers have used a supercomputing technique that mimics natural selection to design the internal structure of an aircraft wing from scratch. The resulting blueprint is not only lighter than existing wings, it also resembles natural formations, such as bird wing bones, that are not present in current aeroplanes. The organic-looking product is as stiff as a conventional aircraft wing but lighter, which could save up to 200 tonnes of fuel per year per plane.

“This is a really nice illustration of how to employ computing-based optimization methods at immensely high resolution,” says Matthew Santer, an aerospace engineer at Imperial College London. The method could feed into the design process, although there are a number of hurdles to using it in aerospace applications in its present form, he adds. 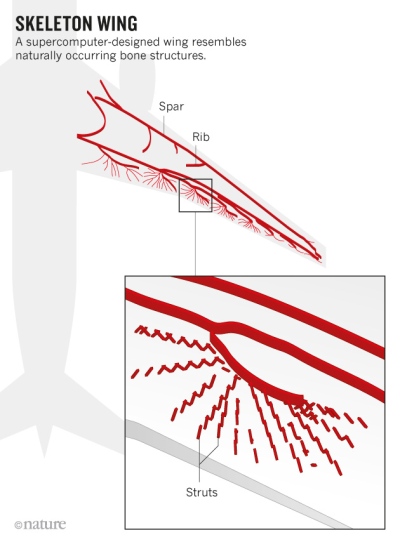 Engineers have been using these kinds of optimization techniques for around 20 years, but only for smaller-scale problems, such as individual wing components, or much simpler structures, says Niels Aage, an engineer at the Technical University of Denmark, near Copenhagen, who led the work1. Aage and his colleagues used the Curie supercomputer in Bruyères-le-Châtel near Paris to increase the resolution, enabling them to model the entire 27-metre-long wing of a Boeing 777.

The team started with a wing outline already optimized for maximum lift and minimum drag, known as an aerofoil, and split it into 1.1 billion 3D pixels or ‘voxels’. Each is about the size of the smallest Lego brick — a resolution roughly 200 times greater than previous efforts. The algorithm began by simulating the force exerted on every block and distributing material in response to where the wing experienced a load. Without any human guidance, the program then repeated the analysis several hundred times, adding or removing material depending on the strain felt by each brick, until it reached a final optimum design. “The structure evolves through each design cycle," says Aage. "The process has many similarities to nature’s own evolution."

Unlike conventional wings, the resulting structure did not contain the usual straight beams running the length of the wings, interspersed by crossing supports. Instead, the design looks organic, says Aage. Curved supports fan out at the trailing edge of the wing, resembling the bones in birds’ wings, and intricate support structures in the leading edge look like the internal structure of a beak.

Without compromising stiffness (resistance to deformation), the design weighs 2–5% less than conventional wing structures. That translates into 200–500 kilograms per wing, potentially saving each plane between 40 and 200 tonnes of fuel per year, say the authors. The technique could also be applied to other industries, says Aage, for example, to design high-rise buildings in earthquake-prone zones that maintain their stiffness yet can withstand the dynamics of a quake. It could be used to optimize acoustics, ventilation systems and antennas, as well, he adds.

The technique’s high resolution, which allows the computer to design structures that include features that range in size from millimetres up to tens of metres, could lead to more-innovative designs in these other disciplines, says Liang Xia, a computational engineer at the Huazhong University of Science and Technology in Wuhan, China. But he stresses that running the algorithm requires a heavy computing burden — the equivalent of running a single standard computer for 100 years. This computing cost could be reduced, however, if the team were to employ more-advanced simulation methods, used in artificial intelligence, which in effect model only parts of the wing in such high resolution.

The design is also too intricate to be made by existing manufacturing methods, and would require a giant 3D printer to build. But for now, key aspects of it could be fed into structures produced using conventional methods, says Aage. “We’re speeding up evolution rapidly, meaning we can see how designs should be, and then extract the key features — or those we can afford.”