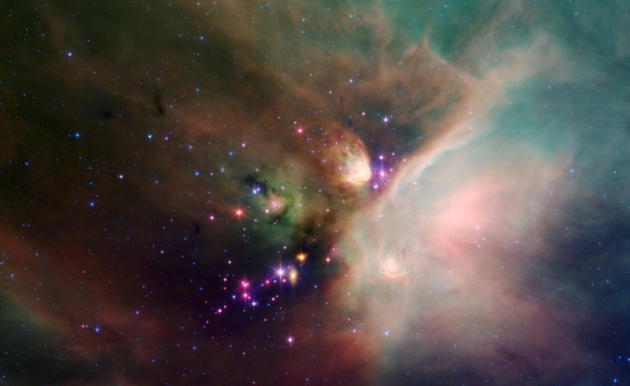 The Rho Ophiuchi cloud, a star-forming nebula, is being observed by the Kepler space telescope.

The crippled Kepler space telescope is unexpectedly enjoying a second lease of life. The exoplanet-hunting probe will now cast its gaze on star clusters, the centre of the Milky Way and the Solar System’s outer planets as it scans a ribbon of the cosmos for the next three years. This month it has been gazing at gas clouds shrouding infant stars in the constellations Scorpius and Ophiuchus.

The telescope, originally designed to look for Earth-like planets orbiting other stars in our region of the Galaxy, has just yielded the first data set since its reincarnation after mechanical failures. Its science team is still busy analysing data from the initial planet-hunting mission, so Kepler’s managers at NASA have left it to the wider astronomical community to choose specific targets for a second mission, known as K2, and to comb through the output.

For a patched-up instrument, it is doing remarkably well. Scientists are just getting to grips with the first K2 observations, made available last month — and they say that the data are promising, leaving them eager for more.

When Kepler launched in 2009, it sought to answer one question: how common are other Earths in the Galaxy? The telescope stared at roughly 150,000 stars near the constellations Cygnus and Lyra, monitoring their brightness and watching for a momentary dimming that would signify planets crossing in front of them. Four years yielded more than 4,000 potential planets, hundreds of them Earth-sized and rocky. At least one of those bodies was found in its star’s habitable zone, where liquid water could exist on its surface (see Nature http://doi.org/wf4; 2013).

Crucial to Kepler’s success were its four reaction wheels, which held it steady like a gyroscope as it circled the Sun. It survived the loss of one wheel in July 2012. But when a second failed in May 2013, Kepler was down to two wheels, with only two axes of control. 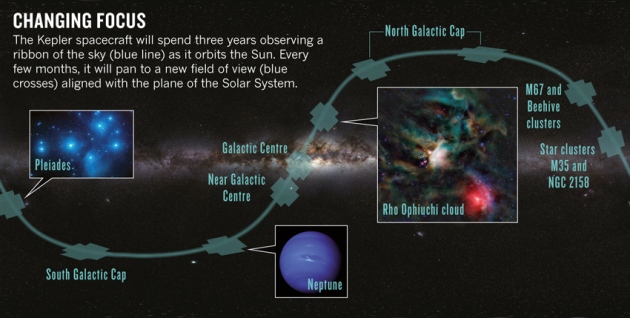 “Sorrow, disappointment, a little grief in there,” is how John Troeltzsch, Kepler programme manager at Ball Aerospace, says he felt when he found out about the second failure. His team had built and operated the craft for NASA at Ball’s facilities in Boulder, Colorado. Kepler’s mission seemed to be over. Then, three days later, he opened an e-mail from Ball engineer Doug Wiemer, proposing a fix. Five hours and eight e-mails later, Wiemer had outlined a plan to get Kepler back on its feet.

Wiemer had fashioned a crutch for Kepler using the only resource available: sunlight. Positioned so that its long side faces the Sun, the spacecraft leans against the pressure created by the onslaught of photons and balances using its two good wheels. With this approach, the team hoped to get within a factor of ten of Kepler’s original performance — but with additional software refinements, NASA’s Kepler project manager Charlie Sobeck says that it is better than that, more like a factor of two or three. Wiemer thinks that further tweaks will close the gap entirely.

One limitation of the K2 mission is that Kepler must keep the Sun side-on as it orbits, forcing the telescope to switch its field of view roughly every 80 days. This is not enough time to hunt for Earth-like planets around Sun-like stars, but it does let K2 track other celestial bodies such as clusters of newly-formed stars (see ‘Changing focus’).

In February, Kepler will turn its gaze to the well-known clusters Pleiades and Hyades, followed in April by the Beehive and M67 clusters. Astronomers love these objects because the stars within them are the same age, which is easily deduced by plotting their brightness and colour. The observations should offer snapshots of planetary systems during their early development, which could resolve debates about how planets form and migrate.

Other opportunities lie closer to home. In Kepler’s previous life, it discovered that Neptune-sized ice giants are the most common planets in the Galaxy. This year and next, it will point at the Solar System ice giants Neptune and Uranus, hoping to learn more about their internal structures by observing the flickers of seismic vibrations.

The team has planned as far ahead as April 2016, when Kepler will look towards the centre of the Milky Way in search of mysterious bodies called free-floating planets. Past observations suggest that Jupiter-sized planets outnumber stars in the Galaxy by a factor of two or more. Most can be detected only when they cross in front of a distant star and the planet’s gravity bends the star’s light like a lens. Kepler should be able to confirm the population of these loners, says Andrew Gould, an astrophysicist at Ohio State University in Columbus. Presumably, some free-floating planets were kicked out of their systems, but they are so massive that it is hard to imagine how, he says; one possibility is encounters with other stars.

Other potential targets abound, including brown dwarfs — the smallest stars, which have clouds and storms like Jupiter — and white dwarfs, which are dim compared with Sun-like stars. This makes any planets hosted by white dwarfs easier to see, and thus they are tempting targets for future observatories such as NASA’s James Webb Space Telescope, which is scheduled to launch in 2018.

Some astronomers worry that K2’s productivity will be limited not by the availability of data, but by NASA’s research grants. Only US$2 million per year is guaranteed for Kepler work; a separate $17-million pot is spread annually across all analyses of data archived from previous NASA missions. The move to increase archival funding is a slow culture shift for NASA, says Gregory Sloan, an astronomer at Cornell University in Ithaca, New York, but one that is necessary to give researchers the years they will need to continue reaping scientific benefits from missions such as K2. “The thing is, it’s a huge, rich data set,” he says. “And there will be years and years before we have really digested it.”