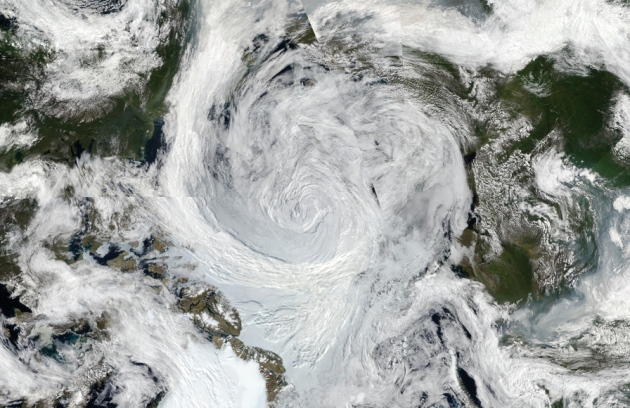 The Great Arctic Cyclone of 2012 chewed up weak ice in a way that could become the norm.

When it comes to maintaining sea ice in the Arctic, it seems, there are good cyclones and there are bad ones.

Last year brought the bad kind. In early August 2012, an unusually large and intense storm barrelled into the Arctic from Siberia. The cyclone churned for nearly two weeks at the height of the summer melt season, contributing to the break-up of the ice, which was already thin and weak, owing to a warm, early start to the season. By September, Arctic sea ice had shrunk to a record low of just 3.4 million square kilometres.

Yet this year, the summer storms that have passed over the Arctic have fulfilled their usual role, bringing snow and cooler air to slow the melting. At present, with the summer thaw set to end in just a few weeks, sea-ice cover stands at around 5.7 million square kilometres (see ‘Slippery slope’). 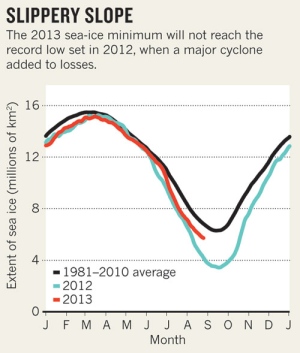 The vast difference between the two melt seasons has researchers investigating the ways in which cyclones can either exacerbate or dampen the effects of climate warming on sea ice. Yet, as global warming continues and cyclones become more intense, many researchers worry that summers like that of 2012 could become the norm.

Ian Simmonds, a climatologist at the University of Melbourne, Australia, says that there is no doubt that the 2012 cyclone was extreme. His calculations show that the storm, called the Great Arctic Cyclone, was the most intense August storm to hit the region since satellite monitoring began in 1979, and the 13th most intense among all storms recorded there. In another study, researchers at NASA found that wind and wave action driven by the tempest caused a massive chunk of ice — covering an area of 400,000 square kilometres — to separate from the main pack (C. L. Parkinson and J. C. Comiso Geophys. Res. Lett. 40, 1356–1361; 2013). The sheared-off portion eventually melted, depleting the overall ice cover and leaving the main pack more vulnerable to erosion from wind, waves and warm water stirred up by the storm.

Other research suggests that the storm’s impact was not quite so severe. Axel Schweiger, a climatologist at the University of Washington in Seattle, ran a computer model to isolate the effects of the cyclone and found that, on its own, it was responsible for only about 150,000 square kilometres of the season’s melt (J. Zhang et al. Geophys. Res. Lett. 40, 720–726; 2013).

In contrast to last year, this summer’s cyclones have bolstered the ice pack by bringing in cold air. Snow from the storms falls on the ice and nearby land, increasing the amount of sunlight that is reflected back towards space and further helping to keep temperatures down.

Yet scientists say that future summer storms are more likely to accelerate ice loss than to slow it, as rising temperatures continue to deplete the Arctic’s ice cover. Thick, ‘multi-year’ ice that has survived more than one summer thaw once covered large expanses of the Arctic Ocean. Now those waters are dominated by thin, ‘first-year’ ice — which forms in autumn and melts the next summer, and is more vulnerable to the fierce winds and waves that the cyclones bring. “As the ice gets thinner and more dispersed, it’s more of a sitting duck as storms come through,” says Simmonds.

The disappearance of the ice may itself lead to more intense storms, says Claire Parkinson, a climatologist at NASA’s Goddard Spaceflight Center in Greenbelt, Maryland. Disappearing ice leaves stretches of open ocean, allowing more warm water to get up into the atmosphere and fuel storms, she says. “The system is definitely interconnected.”

So far, although some research suggests that Arctic cyclones may be growing more intense, several studies have found no apparent change in the frequency of late spring or summer storms there. “Whether we should expect more of these things, that is an open question,” says Schweiger.

This year’s smaller summer melt in the Arctic cannot mask the ongoing decline of the sea ice, says Julienne Stroeve, a climate scientist at the US National Snow and Ice Data Center in Boulder, Colorado. Seven of the eight lowest recordings of sea-ice extent occurred in the past eight years, she says. By early August this year, sea-ice cover was already lower than annual lows recorded in the 1970s and 1980s, with weeks of melting still to go.