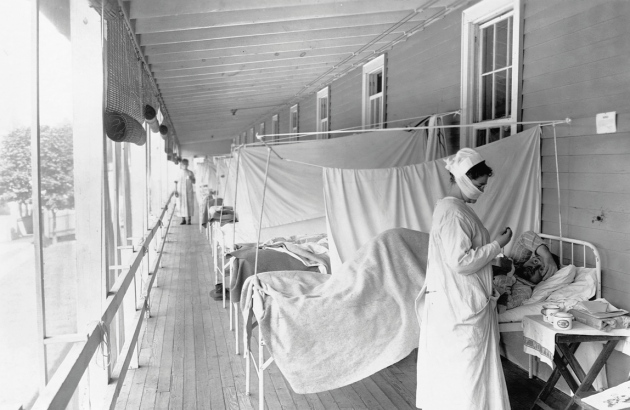 The virus that caused the 1918 influenza pandemic probably sprang from North American domestic and wild birds, not from the mixing of human and swine viruses. A study published today in Nature1 reconstructs the origins of influenza A virus and traces its evolution and flow through different animal hosts over two centuries.

“The methods we’ve been using for years and years, and which are crucial to figuring out the origins of gene sequences and the timing of those events, are all flawed,” says lead author Michael Worobey, an ecologist and evolutionary biologist at the University of Arizona in Tucson.

Worobey and his colleagues analysed more than 80,000 gene sequences from flu viruses isolated from humans, birds, horses, pigs and bats using a model they developed to map evolutionary relationships between viruses from different host species. The branched tree that resulted showed that the genes of the deadly 1918 pandemic virus are of avian origin.

Birds have been implicated in the deadly strain’s origins before. A 2005 genetic analysis of the 1918 pandemic virus pulled from a victim’s preserved tissue concluded that it most closely matched viruses of avian origin2. But a 2009 study3 found instead that the viral genes circulated in humans and swine for at least 2 to 15 years before the pandemic and combined to make the lethal virus.

Gavin Smith, an evolutionary biologist at Duke-NUS Graduate Medical School at the National University of Singapore, calls the current study “an important contribution to how we analyse data”. Smith, a co-author of the 2009 study, notes that it identified an avian relationship for two genes in the 1918 virus, but not for six genes, as the latest study has done.

Worobey's study is highly persuasive, says Oliver Pybus, an evolutionary biologist at the University of Oxford, UK. “It shows the evidence for a pig origin is a lot weaker, but it’s almost impossible to completely shut the door on that.”

Scientists use ‘molecular clock’ models of evolution to piece together relationships among organisms by tracking genetic mutations over time. Such models rely on the notion that genetic changes accumulate at a reliable rate, like seconds ticking by. Some models assume the rates of molecular evolution are roughly equal, but there is evidence that the influenza virus evolves at different rates in different hosts — faster in birds than in horses, for example. Worobey’s model accommodates such a possibility by allowing each host-specific clock to tick independently.

“It’s a striking example of how some model specifications can really tamper with our reconstructions,” says Philippe Lemey, a molecular epidemiologist at the Rega Institute for Medical Research at KU Leuven in Belgium.

The analysis also reveals a shared ancestor for almost all avian flu strains and an H7N7 virus that struck down horses and mules throughout North America in 1872. The panzootic outbreak began in Toronto, Canada, and quickly spread south and west. Newspapers reported “nearly deserted” streets in Washington DC and freight piling up at railroad depots and piers in Philadelphia, Pennsylvania. “Transmission between horses and humans seems to have been key to some epidemics when horses were an intimate part of our lives,” says Richard Lenski, an evolutionary biologist at Michigan State University in East Lansing.

“We now have this idea that the source for a lot of influenza virus we see now worldwide is potentially equine, whereas the dogma has been for so long that its avian,” says Pybus. “It’s a fascinating study, and quite a surprise.”