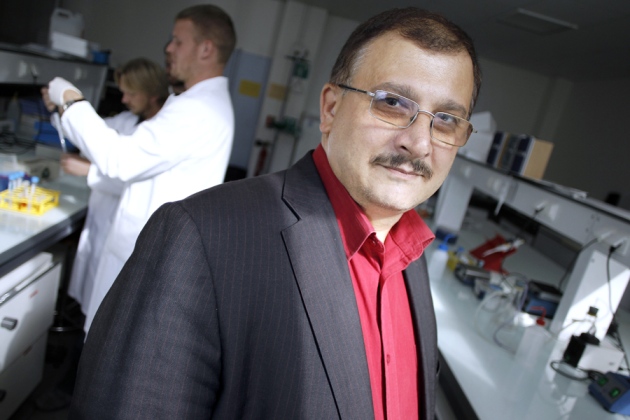 Gilles-Eric Séralini was the lead author of a study, now withdrawn by the publisher, that purportedly showed that genetically modified maize causes tumours in rats.

Bowing to scientists' near-universal scorn, the journal Food and Chemical Toxicology today fulfilled its threat to retract a controversial paper claiming that a genetically modified (GM) maize causes serious disease in rats, after the authors refused to withdraw it.

The paper, from a research group led by Gilles-Eric Séralini, a molecular biologist at the University of Caen, France, and published in 20121, showed “no evidence of fraud or intentional misrepresentation of the data”, said a statement from Elsevier, which publishes the journal. But the small number and type of animals used in the study mean that “no definitive conclusions can be reached”. The known high incidence of tumours in the Sprague–Dawley strain of rat ”cannot be excluded as the cause of the higher mortality and incidence observed in the treated groups”, it added.

Today’s move came as no surprise. Earlier this month, the journal’s editor-in-chief Wallace Hayes threatened retraction if Séralini refused to withdraw the paper. Elsevier retracted the paper shortly after a press conference in Brussels this morning, in which Séralini protested his innocence. He and his team stand by their results, and allege that the retraction derives from the journal's editorial appointment of biologist Richard Goodman, who previously worked for biotechnology giant Monsanto for seven years.

“The magazine reviewed our paper more than any other,” says co-author and physician Joël Spiroux de Vendômois, who is also president of the Paris-based Committee for Research and Independent Information on Genetic Engineering (CRIIGEN), which collaborated in the study. The retraction is “a public-health scandal”, he says.

Goodman however denies any involvement in the decision to retract the paper. "Food and Chemical Toxicology asked me to become an associate editor in January 2013 because of my extensive experience in the area, and after I complained about the Séralini study,” he says. “I am paid a small honorarium for handling manuscripts about biotechnology on a part-time basis, after hours. But I did not review the data in the Séralini study, nor did I have anything to do with the determination that the paper should be withdrawn from or retained by the journal."

The study found that rats fed for two years with Monsanto’s glyphosate-resistant NK603 maize (corn) developed many more tumours and died earlier than controls. It also found that the rats developed tumours when glyphosate (Roundup), the herbicide used with GM maize, was added to their drinking water. (See 'Rat study sparks GM furore').

At the 28 November press conference, Corinne Lepage, a Member of the European Parliament and former French environment minister, said that Séralini’s paper asked “good questions about the long-term toxicity of GMOs [GM organisms] and the Roundup herbicide”. Retraction of the paper “will not make these questions disappear”, added Lepage, who is also a co-founder of CRIIGEN.

Alleged conflicts of interest are at the centre of the latest round of controversy. Lepage called for the resignation of  Anne Glover, who was appointed chief scientific adviser to the European Commission two years ago and whom Lepage says is an advocate of GMOs. Since then, Lepage noted, the commission has proposed, for the first time since 1996, to authorize cultivation of GM maize in Europe. Conflicts of interest with the European Food Safety Authority (EFSA) in Parma, Italy, which is responsible for assessing the risks of GMOs, “remain numerous”, she added.

The paper’s retraction was the latest in a series of setbacks for Séralini and his group. The publication of his team's study was greeted by a storm of protest from scientists, and both the EFSA and Germany’s Federal Institute for Risk Assessment In Berlin slammed the paper for providing inadequate data to support its conclusions.