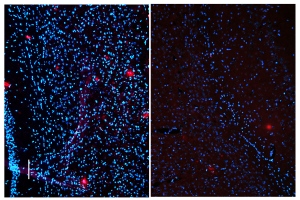 Images from a 2012 study of bexarotene's effects on the brain show amyloid plaques (red) in a mouse brain that are thought to cause a condition similar to Alzheimer's disease (left) and plaques diminished after treatment with the drug (right).

Bexarotene, a cancer drug touted as a potential treatment for Alzheimer’s disease, may not be the blockbuster remedy scientists were hoping for, according to several analyses published in Science on 24 May1–4. Four independent research groups report that they failed to fully replicate striking results published in the journal last year5 by Gary Landreth, a neuroscientist at Case Western Reserve University School of Medicine in Cleveland, Ohio, and his colleagues.

Landreth's team reported that the drug bexarotene could lower brain concentrations of the β-amyloid protein that has long been suspected as a key contributor to Alzheimer’s disease, and could even reverse cognitive impairments in diseased mice. But the study garnered particular attention for its claim that the drug could clear 50% of amyloid plaques — sticky clumps of the protein thought to interfere with brain function — in as little as 72 hours.

“That attracted a lot of folks to try to replicate these studies,” says Philip Wong, a neuroscientist at Johns Hopkins University in Baltimore, Maryland. “No drug at the present moment can do things like that.”

None of the follow-up studies published this week replicated the effects of bexarotene on plaques. Two groups did, however, confirm Landreth’s finding that the drug reduced levels of a soluble, free-floating form of β-amyloid, which can aggregate in plaques4.

Not all of the papers examined memory in mice, but one group led by Radosveta Koldamova, a neuroscientist at the University of Pittsburgh in Pennsylvania, found that bexarotene treatment led to cognitive improvements1.

“It was our expectation other people would be able to repeat this,” says Landreth about the results of the studies. “Turns out that wasn’t the case, and we fundamentally don’t understand that.” He suggests that the other groups might have used different drug preparations that altered the concentration of bexarotene in the brain or even changed its biological activity.

In a response published alongside the comment articles6, Landreth emphasizes that some of the studies affirm two key conclusions of the original paper: the lowering of soluble β-amyloid levels and the reversal of cognitive deficits. He says that the interest in plaques may even be irrelevant to Alzheimer’s disease. In the past ten years, some neuroscientists have begun to question whether it is plaques or soluble β-amyloid proteins that are most dangerous to brain health7.

As the debate over plaques continues, Koldamova says that the cognitive improvement she and Landreth observed suggests that bexarotene is still very promising. “Patients don’t go to the doctor because they have plaques. They go because they have memory decline,” she says.

Other researchers say the contradictory results suggest that much more basic research is needed before bexarotene is used to treat Alzheimer's. “The mechanism of action behind bexarotene has not been proven,” says Kevin Felsenstein, a neuroscientist at the University of Florida College of Medicine in Gainesville, and a co-author of one of the dissenting papers2. Felsenstein’s group found no evidence that bexarotene lowered levels of soluble or plaque forms of β-amyloid protein.

Felsenstein worries that interest in Landreth’s original results could lead to misuse of the drug because, unlike many experimental treatments, it is already on the market. The US Food and Drug Administration has approved bexarotene to treat skin cancer.

In August 2012, The New England Journal of Medicine published an article anticipating growing demand for unauthorized prescriptions of bexarotene as an Alzheimer’s treatment and urging physicians to wait for evidence from human clinical trials8.

Physicians and researchers may get some answers soon: Landreth’s group has begun an early clinical trial to test the drug in healthy participants.