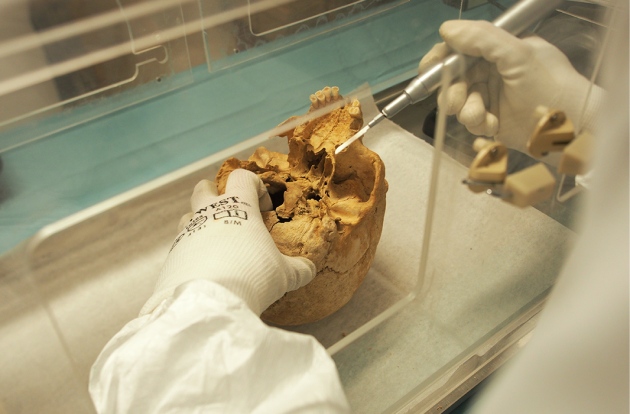 The petrous bone, here being cut from a skull, is an especially rich source of ancient DNA.

The quest to chronicle the past using DNA from ancient humans and animals has become a cut-throat ‘game of bones’, in which a handful of genetics laboratories are hoarding precious samples, three archaeologists charge in a 9 August letter to Nature.

The scientists call for more careful stewardship of DNA-rich bone specimens to ensure that they remain available to multiple research teams to study. They point to the example of a newly established centre in Israel that will act as a national clearing house to curate animal bones from archaeological sites, so that many researchers can access samples for genetic analysis.

“There’s a lot of pressure on these resources right now, on this skeletal material,” says Cheryl Makarewicz, an archaeologist at Christian-Albrechts University in Kiel, Germany, and a co-author of the letter. “The problem is there’s not enough to go around.”

Makarewicz and her colleagues are particularly concerned about a portion of bone in the inner ear, the petrous, that is especially rich in ancient DNA. “Competition for these rare specimens promotes hoarding, which, along with the destruction of samples for DNA analysis, makes it hard to replicate findings,” she and her colleagues write in the letter. “It also hinders research by scientists who are not connected to the few groups who dominate access to such samples.”

It’s important, too, to preserve samples for scientists in future generations, who may invent better methods to extract any DNA that remains in a sample after a first battery of tests, Makarewicz adds — as well as improvements in other techniques, such as isotope analysis.

In the past few years, geneticists have accrued hundreds of archaeological samples — many of them petrous bones — from sites around the world and used them for blockbuster ancient-genomics papers that have charted the spread of agriculture, languages and little-understood cultures.

“It’s been like the Wild West, with several ancient-DNA labs approaching museums across the world on a daily basis,” says Eske Willerslev, an evolutionary geneticist at the Natural History Museum of Denmark in Copenhagen. In 2015, his team published the first ancient-genome study to sequence the DNA of more than 100 individuals1; it charted a massive Bronze Age migration originating in the steppes of Russia and Ukraine.

David Reich, a population geneticist at Harvard Medical School in Boston, Massachusetts, and another leading ancient-DNA researcher, says preserving archaeological samples is crucial. But Reich says that his lab samples bones to minimize their destruction and aims to return remains to archaeology collections within a year. He also notes that his lab is willing to share excess bone powder from petrous samples, and that the data they generate are freely available.

In Israel, a centre in Haifa that was opened in early 2017 will act as a clearing house for animal bones used in ancient-DNA studies, says Guy Bar-Oz, an archaeozoologist at the University of Haifa, Israel, and a co-author of the letter.

Researchers excavating sites in Israel won’t be required to deposit samples to the facility. But Bar-Oz says the fact that the centre is co-managed by the Israel Antiquities Authority means that most of the animal petrous bones recovered in Israel are already there. Scientists must apply for permission to sample material, and data sharing will be strictly enforced, Bar-Oz says.

Not all archaeologists are on board with the idea. “I do not support a central facility of some kind. I think that restricting the science at this point is not in the interest of anyone,” says David Anthony, an archaeologist at Hartwick College in Oneonta, New York, who has provided Bronze Age samples to Reich’s lab (and received them back after DNA extraction with no strings attached, he says).

Marc Vander Linden, an archaeologist at University College London who collaborates with ancient-DNA researchers, likes the idea of ancient-DNA clearing houses. But he is not sure that centralized repositories will work in all countries; many of them, he points out, do not have central organizations with authority over archaeological digs akin to Israel’s Antiquities Authority.

Vander Linden says that the onus is on archaeologists who dig up and curate samples to come up with ideas to tackle the issue. “Samples are a finite resource, and thus any way to improve their curation is more than needed,” he says. “Ancient DNA is a fast-moving field, which is exciting — but more care and less politics would be great.”