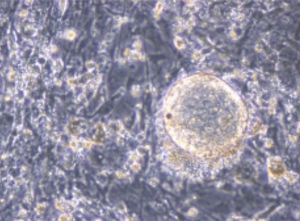 Cells can now be made pluripotent on a tight schedule and with high efficiency.

Researchers have for the first time converted cultured skin cells into stem cells with near-perfect efficiency.

By removing a single protein, called Mbd3, a team at the Weizmann Institute of Science in Rehovot, Israel, was able to increase the conversion rate to almost 100% — ten times that normally achieved. The discovery could clear the way for scientists to produce large volumes of stem cells on demand, hastening the development of new treatments

In 2006, scientists first showed that mature cells could be reprogrammed to act like embryonic stem cells — capable of growing indefinitely and of becoming any type of cell in the body, a property known as pluripotency. But the production of these induced pluripotent stem cells remained mysteriously inefficient. Low cell-conversion rates have thwarted efforts to study how the process, called reprogramming, happens. It has also discouraged the development of techniques to produce stem cells under the stringent conditions required for therapeutic applications.

But in work described today in Nature1, Weizmann stem-cell researcher Jacob Hanna and his team have reprogrammed cells with nearly 100% efficiency. Moreover, the researchers show that the cells all transition to pluripotency on a synchronized schedule.

"This is the first report showing that you can make reprogramming as efficient as anyone was hoping for,” says Konrad Hochedlinger, a stem-cell scientist at Harvard Medical School in Boston, Massachusetts. "It is really surprising that manipulating a single molecule is sufficient to make this switch, and make essentially every single cell pluripotent within a week."

Scientists typically reprogram cells to become pluripotent using a set of four genes. These are integrated into cells' DNA, where they switch on cells' own pluripotency program, turning them into induced pluripotent stem cells. But even established techniques convert less than 1% of cultured cells — many get stuck in a partially reprogrammed state. And some become pluripotent faster than others, making the reprogramming process difficult to monitor.

Hanna and his team investigated the potential roadblocks to reprogramming by working with a line of specially engineered mouse cells, in which the reprogramming genes were already inserted and could be activated with a small molecule. Such cells normally reprogram at rates below 10%. But when a gene responsible for producing the protein Mbd3 was repressed, rates soared to nearly 100%.

Hanna says that the precise timing of embryonic development led him to wonder whether it might be possible to “reprogram the reprogramming process”. Cells in an embryo are not supposed to remain pluripotent indefinitely, he explains. Usually, Mbd3 represses the pluripotency program as an embryo develops, and then remains in mature cells. During reprogramming, proteins from the inserted pluripotency genes prompt Mbd3 to repress the cells’ own pluripotency genes.

That is not good for high-quality reprogramming, says Hanna. “It creates a clash, and that's why the process is random and stochastic. It's trying to have the gas and brakes on at the same time.” Depleting the protein allows the conversion to proceed unhindered.

The team also reprogrammed cells from a human, using a method that does not require inserting extra genes. The tricky technique usually requires daily doses of RNA over more than two weeks. With Mbd3 repressed, only two were required.