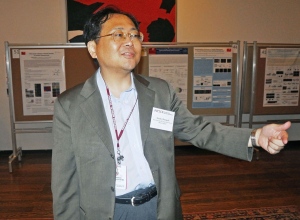 From the beginning, it seemed too good to be true. Days after Kyoto University biologist Shinya Yamanaka won a Nobel prize for his 2006 discovery of induced pluripotent stem (iPS) cells (see 'Cell rewind wins medicine Nobel'), Hisashi Moriguchi — a visiting researcher at the University of Tokyo — claimed to have modified that technology to treat a person with terminal heart failure. Eight months after surgical treatment in February, said a front-page splash in the Japanese newspaper Yomiuri Shimbun yesterday, the patient was healthy.

But after being alerted to the story by Nature, Harvard Medical School and Massachusetts General Hospital (MGH), where Moriguchi claimed to have done the work, denied that the procedure had taken place. “No clinical trials related to Dr Moriguchi's work have been approved by institutional review boards at either Harvard University or MGH,” wrote David Cameron, a spokesman for Harvard Medical School in Boston, Massachusetts. “The work he is reporting was not done at MGH,” says Ryan Donovan, a public-affairs official at MGH, also in Boston.

If true, Moriguchi’s feat would have catapulted iPS cells into use in a wide range of clinical situations, years ahead of most specialists' predictions. “I hope this therapy is realized in Japan as soon as possible,” the head of a Tokyo-based organization devoted to helping children with heart problems told Yomiuri Shimbun.

But there were reasons to be suspicious. Moriguchi said he had invented a method to reprogram cells using just two chemicals: microRNA-145 inhibitor and TGF-β ligand1. But Hiromitsu Nakauchi, a stem-cell researcher at the University of Tokyo, says that he has “never heard of success with that method”. He adds that he had also never heard of Moriguchi before this week.

Moriguchi also said that the cells could be differentiated into cardiac cells using a 'supercooling' method that he had invented. “That’s another weird thing,” says Nakauchi.

The article in which Moriguchi presented his two-chemical method, published in a book1 describing advances in stem-cell research, includes paragraphs copied almost verbatim from other papers. The section headed “2.3 Western blotting”, for example, is identical to a passage from a 2007 paper by Yamanaka2. Section 2.1.1, in which Moriguchi describes human liver biopsies, matches the number of patients and timing of specimen extractions described in an earlier article3, although the name of the institution has been changed.

When contacted by Nature, Moriguchi stood by his publication. “We are all doing similar things so it makes sense that we’d use similar words,” he says. He did admit to using other papers “as reference”.

To support his supercooling technique, Moriguchi cited a paper of his own in Scientific Reports4 (a Nature Publishing Group journal). When Nature pointed out that that paper describes supercooling of human ovaries for preservation and not, as he asserted, for the differentiation of iPS cells into cardiac cells, Moriguchi said that a referee had recommended that he leave the latter experiment out of the paper “because it’s basically the same technology”.

Moriguchi says that he did most of the contentious work himself, including safety research in pigs, the initial surgery and some of a further five similar procedures in other patients that took place from August onwards. Other researchers were involved in some of the procedures, he says, but he would not provide any names.

“I doubt whether this is real.”

Moriguchi agreed that he was claiming “quite a variety of expertise” for this array of procedures. To Nature, he said that he had learned the necessary surgical techniques while earning a medical degree at the Tokyo Medical and Dental University, but today he changed his story, saying that he has a nursing degree from the institution, not a medical degree.

The University of Tokyo did confirm that Moriguchi held a position there from 2006 to 2009, during which he studied “medical economics” and “evaluation of clinical technologies”. He is currently a visiting researcher at the university, working in the laboratory of Makoto Mihara in the university hospital's cosmetic-surgery section, where he “comes in once or twice a week”, says a secretary. Mihara was in a meeting concerning the case and could not be reached for comment.

Moriguchi also claims to have a laboratory at MGH and Harvard Medical School. The institutions confirmed that Moriguchi was a visiting fellow at MGH in 1999–2000, but he has not been associated with the hospital or the medical school since then.

When questioned about who had funded his iPS cell procedures, where the procedures had been carried out, where his ethical review had taken place and which good manufacturing practice (GMP) facility had produced the necessary clinical-grade cells, Moriguchi referred again to MGH and Harvard Medical School. He could not, however, name the head of the ethical review board or any contacts at the GMP facility.

Jerome Ritz, co-director of the Connell O'Reilly Cell Manipulation Core Facility at Harvard Medical School, told Nature, “We have not produced any iPS cells for any patients in our facility. I can't imagine what other facility might have produced these cells.”

Others share the scepticism about the work. "I doubt whether this is real," says Nakauchi.