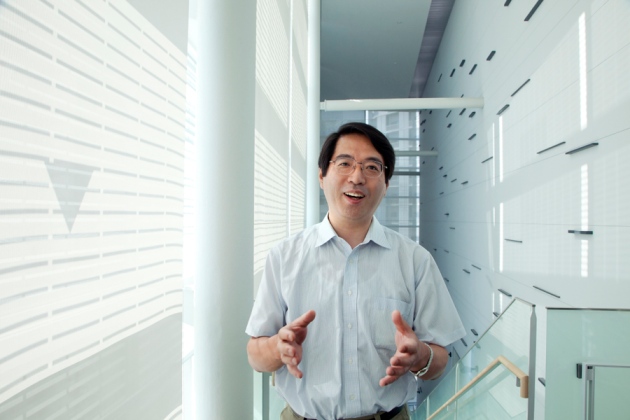 Scientists around the world are struggling to get to grips with the loss of one of the brightest stars in stem-cell research. Yoshiki Sasai, deputy director of the RIKEN Center for Developmental Biology (CDB) in Kobe, brought excitement and precision to the field but died on 5 August, aged 52. The reasons for Sasai’s apparent suicide are still not clear, but a scandal swirling around two stem-cell papers published in Nature in January had wreaked havoc on his career.

“Dr Sasai was a rigorous and innovative scientist and his loss will be deeply felt,” says Janet Rossant of the Hospital for Sick Children in Toronto, Canada, a former head of the International Society for Stem Cell Research. “His most important contributions to the stem-cell field came from his background in developmental biology.”

Sasai’s research spanned developmental biology, stem cells, the generation of organs and tissue engineering. His success was built on his painstaking efforts to understand exactly which factors needed to be added or removed to cell cultures to guide embryonic stem cells as they differentiated to mature cell types, especially neuronal cells1.

“He sees things that others don’t see,” developmental biologist Edward De Robertis told Nature when we interviewed him in 2012 for a story about Sasai's research. De Robertis, of the University of California, Los Angeles, supervised Sasai’s postdoctoral work in the mid-1990s, and recalled Sasai once retyping a lost manuscript word-for-word, from memory. “I’d never seen anything like that,” he said.

One of Sasai’s innovations was the discovery, reported in 20072, of a pharmacological compound that kept embryonic stem cells from dying when separated from each other. Previously, embryonic stem cells had to be cut manually with a cumbersome method and transferred as partial colonies, which resulted in experimental variation. “His paper solved that overnight,” says Luc Leyns, a stem-cell biologist at the Vrije Universiteit Brussel.

An even bigger showstopper came shortly after that. Following his success in differentiating stem cells into neurons, Sasai started mimicking embryonic development with such fidelity that his cells would organize themselves into three-dimensional structures, including a goblet-shaped clump of retinal tissue known as an optic cup3, which sprouts from the developing brain, and intricate layers of tissue that resembled a rudimentary cerebral cortex4.

These discoveries opened the field of in vitro brain organogenesis. “Finally, we have easy access to the developing brain without having to micro-dissect embryos,” says Leyns, who uses Sasai’s papers “to show master’s students how a modern scientific discovery is made and progressively built up to a climax”.

Sasai’s work was inspirational, says Pete Coffey, who studies regenerative medicine at University College London, where Sasai gave a talk on the optical-cup research last November. “The clarity of his presentation, the excitement and post-lecture discussions with fellows and students are still discussed today. He had a major impact on my group,” says Coffey. Sasai’s research will probably contribute to treatments for various disorders, such as macular degeneration — a leading cause of blindness. “His findings galvanized the ophthalmology community in truly developing a cell therapy for blinding disorders,” says Coffey.

Sasai planned to improve on each of his three-dimensional brain structures, for example creating a pituitary gland with a blood supply. He also had an even grander vision of working out how all of the different brain parts link up to create the complex networked structure we have.

But back in December 2012, he had started helping Haruko Obokata, then a visiting researcher at the CDB, to prepare a manuscript that reported a method of creating embryonic-like stem cells merely by subjecting mature cells to stress. The method, known as stimulus-triggered acquisition of pluripotency, or STAP, resulted in two papers that were published in Nature in January 20145, 6 and included Sasai as a co-author. Both papers were subsequently shown to be full of problems, and on 2 July, Nature retracted them both at the authors' unanimous request 7, 8.

On 1 April, a RIKEN committee tasked with investigating the case judged that Obokata had committed scientific misconduct by including in one of the papers a manipulated figure and an image that she had already used in her dissertation to illustrate a different phenomenon. Sasai was cleared of any direct involvement, but he was found to have “grave responsibility” for failure in oversight of the project. He was awaiting the judgment of a RIKEN disciplinary committee.

Peers say that Sasai should have taken more care to ensure the reproducibility of such extraordinary claims, and that he was guilty of overhyping the research when it was first announced. But those who knew Sasai think it was a rare lapse. Leyns, who got to know Sasai during pizza lab seminars at the University of California, Los Angeles, says that Sasai was always the one to insist on independent confirmation. “He may have dropped the ball on a story which was not his core research field [STAP], but, knowing him, I have not the slightest doubt about his scientific integrity.”

In Japan, the media rained criticism on Sasai, including unsubstantiated accusations, some of which made it into a harsh investigative report by the RIKEN Reform Committee, an independent group charged with preventing misconduct. Among other things, the report suggested that the decision that Obokata wear an apron given to her by her grandmother, rather than a lab coat, to a press conference, was a deliberate PR strategy, orchestrated by Sasai, to sensationalize the STAP results. The report also “surmised” that Sasai was driven by the desire for large grants in pursuing STAP research.

In his last e-mail to Nature's news team (which is editorially independent of its research editorial team), on 26 June, Sasai admitted that he had failed to subject the data to sufficient scrutiny, but he vehemently denied that he was thinking of funding opportunities or that he had had a hand in deciding what Obokata wore in front of the media.

In June, when we asked for substantiation of various allegations brought against Sasai and the CDB, neither committee head Teruo Kishi, a materials scientist at the University of Tokyo, nor other committee members offered any. Nature's news team was told: “Our committee has fulfilled our mission and has now been dissolved.” Committee members also noted that the refusal to provide evidence of their claims stemmed from the desire “to avoid any unnecessary confusion and/or misunderstanding”.

In an apparently unprecedented move, the independent committee recommended that the CDB be disbanded. For Sasai, who was a major driver in the establishment of the centre in 2000, “those sorts of threats would have weighed heavily”, says Robin Lovell-Badge, a stem-cell and developmental biologist at the Medical Research Council National Institute for Medical Research in London. “They were very unfair.”

The reason for Sasai’s apparent suicide is still not clear. He was found hanging in the stairwell of a research building adjacent to the CDB. Three farewell notes were discovered in a bag in the stairwell: one addressed to the CDB management, one to Sasai’s laboratory members and one to Obokata.

“This is a great loss to science and regenerative medicine in particular. A tremendous loss for his family,” says Coffey. Leyns remembers Sasai as ”a loving father who left the lab in the early evening to go home to share good moments with his young kids at bath and bed time and then came back to the lab to work late”, adding, “My thoughts go first to his very kind wife and children.”

Back in 2012, De Robertis noted that he was proud of Sasai, “an absolute leading light” whose research had a “long trajectory of achievement”. That trajectory has now been cut tragically short.