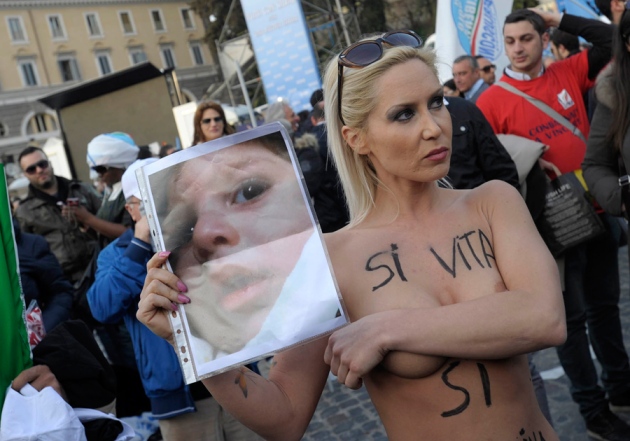 A naked woman joined protesters in Rome calling for stem-cell therapy for all incurably ill patients.

Clinics that offer unproven stem-cell treatments often end up playing cat and mouse with health regulators, no matter which country they operate in. In Italy, however, one such treatment now has official sanction. The country’s health minister, Renato Balduzzi, has decreed that a controversial stem-cell treatment can continue in 32 terminally ill patients, mostly children — even though the stem cells involved are not manufactured according to Italy’s legal safety standards.

The unexpected decision on 21 March has horrified scientists, who consider the treatment to be dangerous because it has never been rigorously tested. In the opinion of stem-cell researcher Elena Cattaneo of the University of Milan: “It is alchemy”.

The decision followed weeks of media pressure to authorize compassionate use of the therapy, which was developed by the Brescia-based Stamina Foundation and has been repeatedly banned in the past six years. Now, patient groups are pushing for the treatment to be available to anyone with an incurable illness. Hundreds protested in Rome on 23 March, including a naked woman with pro-Stamina slogans painted on her skin.

Stamina Foundation president Davide Vannoni, a psychologist at the University of Udine, says that the publicity around the treatment has won him 9,000 new patients. He hopes that further modifications to the law will allow him to expand the therapy.

A month ago, an investigatory television programme, The Hyena, reported that children with incurable diseases such as spinal muscular atrophy were being denied supposedly important treatment, and Italian show-business personalities joined the call to relax rules on stem-cell treatment.

In Italy, the compassionate use of as-yet-unapproved therapies is allowed on an emergency basis for dying individuals who have no other options, and the national health service must provide them for free. The law requires that health authorities approve the quality of such therapies, but some of its terms are ambiguous, says Amedeo Santosuosso, a Milanese judge and a professor at the University of Pavia who specializes in science and law. “That has been the underlying problem in the Stamina debacle,” he says. “In the case of the Stamina Foundation therapy, there is no suggestion that it might be efficacious, so in my opinion compassionate use is not legitimate.”

Vannoni says that he developed the therapy after having successful stem-cell treatment for a virus-induced facial paralysis in 2004 in Russia. He invited a Russian and a Ukrainian scientist to Turin to develop the method and says that Stamina has since treated 80 or so patients — including people with Parkinson’s disease, Alzheimer’s and muscle-wasting disorders. He has not published the outcomes or precise details of his therapy, which uses the mesenchymal stem cells from bone marrow that differentiate into bone, fat and connective tissue. In his protocol, the cells are extracted from patients, manipulated in the laboratory and then re-infused.

Vannoni acknowledges that he has not published outcomes but says that the method is far from alchemy. Each treatment uses five types of cell, he explains, with their claimed characteristics tuned to replace damaged tissue or to secrete molecules that could reduce inflammation, fight infection or promote blood-vessel growth. ”Whatever the disease, one of the types of cell is going to have the right effect,” he says.

When a 2007 European Union regulation required that stem-cell therapies follow the same safety and efficacy rules as pharmaceuticals, Vannoni moved his lab to the republic of San Marino. “There, rules were not so strict,” he says.

But his work had drawn the attention of a Turin prosecutor, Raffaele Guariniello, whose investigations concluded that Vannoni’s operation could be “dangerous to public health”. Vannoni says that Guariniello marshalled international pressure to stop him working in San Marino, so he moved to Trieste, where he says Guariniello again stopped his work.

From there, Vannoni moved to a public hospital in Brescia. Last May, a delegation including representatives of the Italian Medicines Agency (AIFA) and the ISS, the health ministry’s national institute, visited the Brescia lab and reported chaotic conditions: ethics-committee approvals had been based on inadequate information, and there were no detailed protocols or patient follow-up, for example. The AIFA closed the lab, stating that the facilities could not be trusted to produce contamination-free preparations.

Patients and families turned to the legal system to allow treatments to continue as compassionate use; many of the courts concluded that it was a patient’s right to receive treatment and that health services must offer it, and in some cases the Brescia lab once again supplied cells.

Some of the compelled treatments led to the only publication of clinical results so far. Clinicians at the Burlo Garafalo Children’s Hospital in Trieste treated five babies with type I spinal muscular atrophy and published the results last October (M. Carrozzi et al. Neuromuscul. Disord. 22, 1032–1034; 2012). They found that “the treatment did not change the course of the disease”, says co-author Marco Carrozzi. Vannoni argues that the therapy failed because the clinicians did not use his exact cocktail of cells.

Setting himself against his own regulatory agencies, Balduzzi had earlier angered scientists when, on 7 March, he authorized continued therapy for a three-year-old child with the deadly disease metachromatic leuko­dystrophy — provided that the stem cells were created in a good manufacturing practice (GMP) facility. Thirteen academics, including Cattaneo and Santosuosso, published an open letter to Balduzzi warning him of the dangers (see go.nature.com/pb1wdl; in Italian).

That authorization was bad enough, says Paolo Bianco, a stem-cell scientist at the University of Rome who co-signed the letter. “Now the minister is allowing the non-GMP version and saying that an unauthorized, unpublished, unknown practice is a ‘treatment’.”

Balduzzi’s decree is likely to be his last legislative act in Italy’s outgoing government, and scientists hope that his successor will respect the role of the AIFA and other science-based agencies. AIFA president Luca Pani declined to comment on the political decision but says that his agency is sticking to its statements on the safety and efficacy of the stem-cell preparations from Brescia. “Our ban holds,” he says.