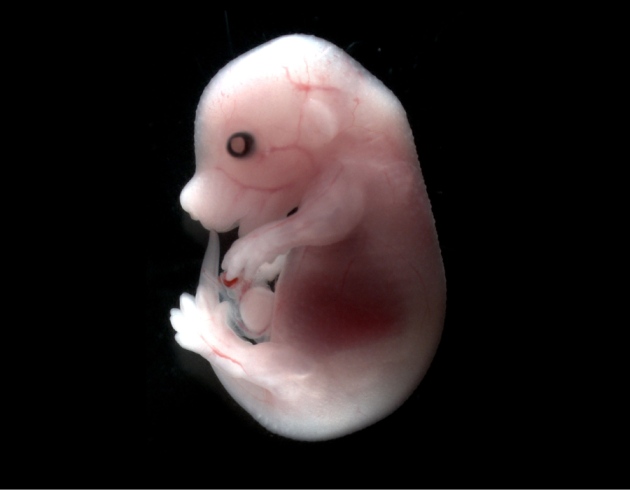 Embryonic mice show changes in gene expression when their mothers are undernourished.

A mother’s diet leaves a lasting impact on the health of her descendants. Mice that are starved during pregnancy give birth to pups that later develop diabetes, and whose offspring are also at risk of the disease. Now a new study provides fresh evidence for the controversial idea that chemical or ‘epigenetic’ alterations to the genome — which influence gene activity, but not the DNA sequence — can transmit the effects of environmental exposures across multiple generations1.

Claims of transgenerational inheritance are mired in controversy, and some scientists, pointing to methodological flaws and the lack of a biological mechanism, are unconvinced by previous studies demonstrating that foods2, fungicides3 and even fear4 can affect future generations through epigenetic modifications.

“I decided it was time I actually did some experiments on this myself, rather than criticize people,” says Anne Ferguson-Smith, a geneticist at the University of Cambridge, UK, who co-led the latest study, which appears today in Science1.

Her team looked to a strain of mice that could survive being fed 50% fewer calories than normal during late pregnancy. These mice gave birth to underweight pups, which later showed signs of diabetes, such as glucose intolerance. What’s more, the males of that generation went on to have offspring that also developed symptoms of diabetes, even though they ate normally.

The model is analogous to a segment of the Dutch population who faced famine during the winter of 1944–45, at the end of the Second World War. Children conceived during this ‘hunger winter’ were born underweight and experienced health problems, including diabetes and obesity. Some studies have suggested that their children, too, face a higher risk of metabolic disease5.

Some researchers have proposed that the health problems of descendants of the hunger winter were caused by epigenetic modifications, in particular DNA methylation, in which a methyl group is added to DNA. This modification typically quells the activity of nearby genes. Yet most methyl groups are removed with formation of an embryo, and only a small number of genes are known to escape this process.

Ferguson-Smith and her team compared sperm from those born to starved mothers, to that from control mice, whose mothers were well nourished. The researchers were looking for regions of the sperm genome that were methylated differently between the groups. The primordial germ cells that make sperm develop during the window in which the mothers were starved. The researchers found 111 regions of the genome that contained fewer methyl groups in the mice born to starved mothers than in the controls, and 55 regions in which the DNA was adorned with more methyl marks.

They next analysed the expression of genes neighbouring 17 of those regions that showed altered methylation. Many of the genes were expressed differently between 'grandchildren' of the starved mothers and control mice, including genes known to be involved in glucose tolerance and metabolism, even though the changes in methylation were not present in this generation. The researchers say that altered methylation patterns in sperm continue to influence the activity of genes later in development by an unknown mechanism.

However, Tim Bestor, an epigeneticist at Columbia University in New York, is unconvinced. He points out that the strain of mice used is not inbred, which means that the pups are not genetically identical and so selection may play a role (though the researchers believe their methodology addressed this). The pups that survive maternal starvation may require less nutrition but have a higher risk of metabolic disease, he suggests. “The researchers attribute everything to epigenetic causes when, in fact, a genetic cause seems far more likely.”