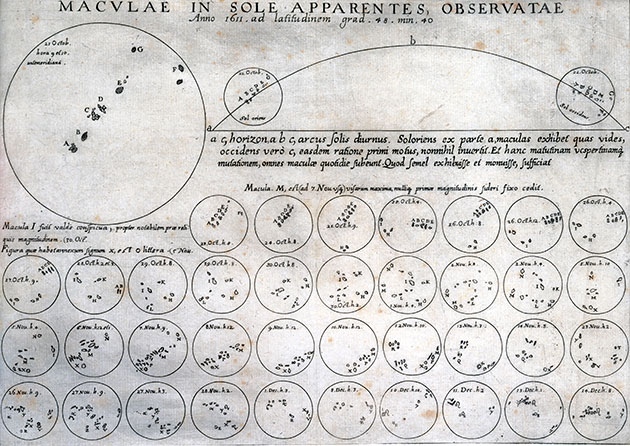 Galileo and his contemporaries recorded some of the first observations of sunspots.

Astronomers have fixed an embarrassing discrepancy involving the longest observational record in science: data on sunspot activity that stretch back four centuries. The discovery has ramifications for understanding how the Sun has affected, and could still affect, life on Earth.

Notably, the revised sunspot tally shows that solar activity has not risen in recent decades, as once thought1. Some had linked this idea of a sunspot 'Grand Maximum' to hotter temperatures on Earth.

“We find no such Grand Maximum,” says Frédéric Clette, an astronomer at the Royal Observatory of Belgium in Brussels. “There has been nothing exceptional about the level of solar activity.”

He described the work on 7 August in Honolulu, Hawaii, at a meeting of the International Astronomical Union.

Sunspots are breakouts of magnetism on the Sun’s surface that reflect roiling activity within. The practice of counting them dates to 1610, when Galileo and others used the newly invented telescope to discover dark blotches marring the face of the Sun. Such records eventually revealed the roughly 11-year cycle of solar activity.

Clette and his colleagues spent four years working to recalibrate two official sunspot lists2. One of them — the International Sunspot Number — was started in 1849 by an astronomer at the Zurich Observatory in Switzerland, and later extended with older historical records. The second list, the Group Sunspot Number, was developed in 1998 by US researchers3. It tallies groups of sunspots rather than individual ones in an effort to eliminate observers' inconsistencies.

The International Sunspot Number also attempts to account for variations caused by seeing conditions and the ability of the person reporting the numbers. But the two sunspot counts occasionally diverge. 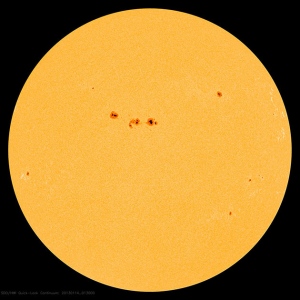 Clette and his team identified several sources of systemic error in the two lists, such as the fading eyesight of an ageing observer in Switzerland who was seeing fewer sunspots over time. In other cases, skywatchers were focused on making other solar observations, so if their notes do not mention sunspots this does not necessarily mean that none were present.

The team developed a method for choosing a main sunspot observer for a given interval of time, while ensuring that observers from adjacent periods overlapped to give smooth transitions. Recalibrating the two lists caused the suggested Grand Maximum in the latter half of the twentieth century to disappear ― a change largely due to the correction of data collected around 1893, when the Zurich Observatory switched directors.

Given the intense public interest in solar forcing and climate, the work is likely to be carefully scrutinized. Douglas Hoyt, a solar physicist and co-inventor of the Group Sunspot Number, says that the new reconstruction is “not very convincing”. Among other things, he disagrees with Clette's team discarding the results of a particular observer in the late nineteenth century, and he says that other studies support the idea of a slow rise in sunspot numbers in the past several centuries.

Still, the revised numbers resolve a discrepancy with a third list kept by the US National Oceanic and Atmospheric Administration (NOAA), which showed about 30% more solar activity than the International Sunspot Number did. Douglas Biesecker, a solar physicist at NOAA's Space Weather Prediction Center in Boulder, Colorado, says the reconstructed record and the agency record now agree more closely.

The World Data Center for sunspots, based at the Royal Observatory of Belgium, started using the new lists on 1 July.

Knowing the range of past solar activity could help researchers to better predict future solar cycles, says Biesecker. The military and others use sunspot numbers to anticipate possible satellite damage from solar storms.

Clette says that the discovery confirms the importance of historical records. “We can be happy that people who didn’t know anything about magnetic fields on the Sun cared to count spots and write down lists,” he says. “Day after day, sometimes for their whole life.”