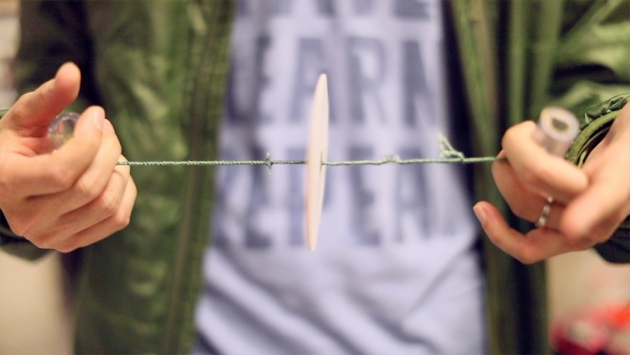 A paper centrifuge, capable of separating out parasites like malaria from blood samples, in action.

Growing up in India, Manu Prakash entertained himself with a bottle cap that spun around on two strings that he tugged with his fingers. As a physical biologist at Stanford University in California, he is now transforming that simple toy, called a whirligig, into a cheap tool to help diagnose diseases such as malaria.

Prakash started this project, the results of which are published on 10 January in Nature Biomedical Engineering1, after a research trip to Uganda in 2013. While visiting health-care clinics, he noticed that most lacked a working centrifuge — or the electricity to power one — and could not separate blood samples to perform basic disease diagnostics.

“One clinic used its broken centrifuge as a doorstop,” says Prakash, a 2016 MacArthur ‘genius grant’ winner who has also invented a foldable paper microscope2. “When we got back from Africa we asked ourselves, ‘Can we do centrifugation with no electricity, using only human power?’”

Other researchers have come up with low-tech, inexpensive centrifuges that used salad spinners3 and egg beaters4, but these devices could manage only around 1,200 rotations per minute (r.p.m.) and took too long to process samples, says Prakash. Hoping to do better, his team went on a shopping spree to a toy store, collecting spinning gizmos and filming them with a high-speed camera. Yo-yos spun too slowly (and required training to use). But whirligigs were both easy to operate and reached speeds of 10,000 r.p.m., comparable to a commercial centrifuge.

Delighted by the whirligig’s performance, the researchers began exploring the mathematics underlying it in the hope of making improvements. Video footage revealed that the toy’s strings not only twist around each other as they wind and unwind, but also form coils similar to structures found in DNA. Solving the equations that describe the forces behind that coiling revealed the specs for an ideal whirligig — from the size of its disc to the thickness of its strings — capable of spinning a million times per minute.

Human hands cannot spin the toy fast enough to hit that theoretical limit. But a new design made in the lab achieved 125,000 r.p.m. — submitted to Guinness World Records last year as the fastest device to rotate under human power.

“What makes this really special is that it takes something simple and reveals something superbly useful hiding just under our noses,” says Tadashi Tokieda, an applied mathematician at the University of Cambridge, UK.

After optimizing the whirligig, Prakash and his team then mounted plastic tubes for holding blood samples onto their paper device. Their final prototype, dubbed the paperfuge, can reach 20,000 r.p.m., separating plasma from blood in 1.5 minutes, and malaria parasites in 15 minutes.

Whether health-care workers will be willing to spend that much time powering the paperfuge — either in a health-care facility or out in the field — remains to be seen. Prakash has partnered with the health-care nonprofit PIVOT in Boston, Massachusetts, for a clinical trial in Madagascar, which will assess not only how easy the device is to use, but also its durability and reliability compared to commercial centrifuges.

“We don’t know yet if the paperfuge will work,” says Matt Bonds, PIVOT cofounder and an economist at Harvard University in Cambridge, Massachusetts. “It would take a lot of evidence to convince people to abandon modern centrifuges, but having paperfuges available as an alternative could open up a world of new possibilities.”