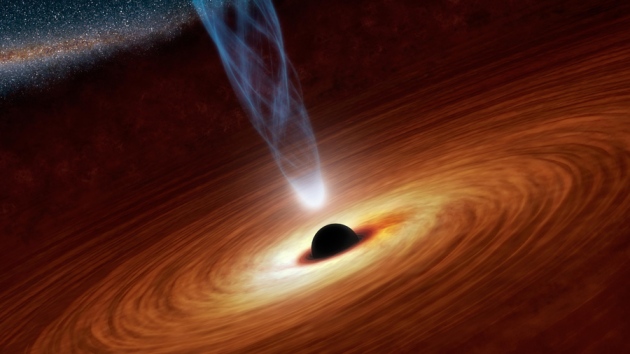 X-rays emitted by swirling disks of matter hint at the speed at which a supermassive black hole spins.

Black holes can be described by just two fundamental characteristics: mass and spin. Astronomers have been able to measure the objects’ mass for decades, by looking for gravitational effects on the orbits of nearby stars. But measuring spin, which records the angular momentum of the matter that falls into the holes, has proved troublesome, particularly for the supermassive black holes that lie at the centres of galaxies. No light emanates from the black holes’ spinning event horizons, so astronomers instead look for proxies that emit X-rays, such as the swirling disks of matter that feed into some holes.

Such indirect spin measurements have now been made for 19 supermassive black holes for which the mass is also well known (see ‘Spin off’). On 29 July, astronomers reported that they had calculated the spin of another supermassive black hole, using a new technique that, although unproven, provides an alternative way to target the elusive quantity. “There’s a significant number of us who think we are getting a coherent picture of black hole spin,” says Andrew Fabian, an astronomer at the University of Cambridge, UK. 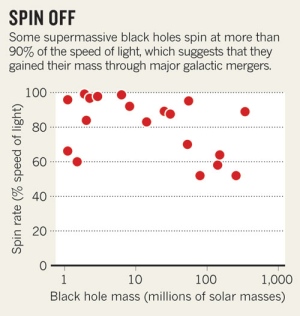 The conventional method used to measure spin dates to 1995, although this has been controversial until recently. It relies on the detection of X-rays emitted from the corona, a spherical halo of hot, ionized gas that sits just above and below the plane of the black hole’s accretion disk. Some of these X-rays bounce off the disk and travel towards Earth. In them, astronomers can sometimes discern a prominent emission line characteristic of iron. The higher the black hole’s spin, the closer the accretion disk can get to the black hole’s event horizon, and the more the strong gravity can distort the iron line, spreading it over a wider range of X-ray energies.

Scepticism about the method is beginning to lift. In February, astronomers published spin calculations (G. Risaliti et al. Nature 494, 449–451; 2013) that used data from NASA’s NuSTAR mission, which was launched last year (see Nature 483, 255; 2012). Study leader Guido Risaliti, an astronomer at the Harvard-Smithsonian Center for Astrophysics in Cambridge, Massachusetts, says that NuSTAR provides access to higher-energy X-rays, which has allowed researchers to clarify the influence of the black hole’s gravity on the iron line. These rays are less susceptible than lower-energy X-rays to absorption by clouds of gas between the black hole and Earth, which some had speculated was the real cause of the distortion.

In the latest study, astronomers calculated spin more directly (C. Done et al. Mon. Not. R. Astron. Soc. http://doi.org/nc2; 2013). They found a black hole some 150 million parsecs away with a mass 10 million times that of the Sun. Using the European Space Agency’s XMM-Newton satellite, they focused not on the iron line but on fainter, lower-energy X-rays emitted directly from the accretion disk. The spectral shape of these X-rays offers indirect information about the temperature of the innermost part of the disk — and the temperature of this material is, in turn, related to the distance from the event horizon and the speed at which the black hole is spinning. The calculations suggest that, at most, the black hole is spinning at 86% of the speed of light.

Study leader Chris Done, an astronomer at Durham University, UK, thinks her result casts doubt on spin measurements made using the iron line, because those results tend to come in at above 90%. “We’re on the very edge of what we can do,” she says. “We have different methods and we’d like them to agree.” Others argue that the differences in results may reflect a genuine variation between supermassive black holes, and suggest that spin may vary with mass, or over cosmic time.

Much is at stake. If the spins of supermassive black holes are as high as some have found using the iron line, then these black holes are likely to have formed from rare, major mergers between colliding galaxies, in which a large quantity of material falls into the central black hole from one direction. If the spins are lower, as Done suggests, then the black holes may have formed from many minor mergers, with bite-sized lumps of material coming from various directions. The distribution of black hole spins could therefore inform researchers about the history of galactic evolution, particularly if astronomers can eventually chart the change in spin over cosmic time by looking at ever-more-distant black holes.

Astronomers also want to understand whether spins power the jets of material that spew out from some black holes. But they cannot address these questions while dis­agreement remains over the spin measurement techniques, says Risaliti. He is optimistic that further X-ray observations will resolve the controversy. “It’s a long way to go, but this is the beginning,” he says.