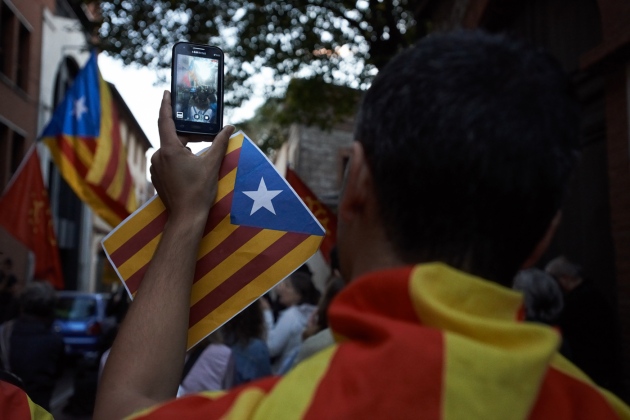 Supporters of independence for Catalonia.

The Spanish government has taken over responsibility for higher education and research in Catalonia, following the region’s unilateral declaration of independence on 27 October. It will retain control of spending on research centres and universities, which the League of European Research Universities says threatens institutional autonomy.

The Catalonia region of north-east Spain has been in political turmoil ever since a highly controversial vote on independence was taken on 1 October. For the past 32 years the Catalan government has set and financed the budgets of universities, which were allocated €700 million (US$814 million) of the nearly €1-billion Catalan budget for science and universities in 2017. The region is strong in science: between 2007 and 2015, its universities won a 210 grants from the European Research Council, totalling €334 million. In the most recent round, 10 of the 22 ERC starting grants awarded to researchers in Spain were won by researchers based at Catalan institutions.

The Ministry of Education, Culture and Sport in Madrid will run Catalan universities and the Ministry of Economy, Industry and Competitiveness will oversee the region’s research policy with immediate effect.

The changes mean that the Spanish government will be able to make decisions affecting research centres and universities in Catalonia, after it dismissed all the members of the Catalan government.

Carmen Vela, Spain’s secretary of state for research, development and innovation, says that the government hopes the difficulties will be resolved shortly. “Today’s situation is a bit different, but it has a very clear goal: restoring normality and tranquility. We are going to work to ensure that there are no negative impacts on research and innovation in Catalonia.” She says that the Spanish government will manage but not devise science policy in Catalonia ahead of regional elections due in December.

Santi Vila, minister of business and knowledge in the Catalan government, stepped down a day before the independence declaration. Arcadi Navarro, secretary of state for universities and research in the Catalan government and a geneticist at Pompeu Fabra University in Barcelona, who used to report to Vila, might yet remain in his job. Vela says that she would like him to continue. “Arcadi is an excellent researcher and someone with whom we have always had an excellent relationship,” Vela says. “We want to keep working with him.”

Jaume Casals, rector of Pompeu Fabra University, says that he does not expect the Spanish government to interfere directly in universities’ affairs. “The relationship between Madrid and Barcelona when it comes to science and universities has always been fluid, and I hope that will not change,” says Casals, who also leads the Alliance 4 Universities, a group of research-intensive universities consisting of two based in Madrid and another two in Catalonia.

Enric Banda, senior adviser at the Barcelona Supercomputing Centre and former president of the grass-roots association EuroScience, agrees. “This is the first time these type of measures, stipulated in the Spanish constitution, are applied. The uncertainty is high because nobody knows exactly how they will be implemented. But I don’t expect any additional disruption in the daily activities of the Catalan universities,” he says.

The League of European Research Universities, headquartered in Leuven, Belgium, has criticized the financial arrangements on the grounds that they undermine institutional autonomy. In a statement issued on 23 October, the group’s secretary-general, Kurt Deketelaere, wrote: “Just like academic freedom, institutional autonomy is key for the academic world and society at large. It cannot be limited on the basis of political considerations, or to serve political goals.”

Ahead of the Catalan elections in December, both Casals and Banda are calling on the Spanish government to lift the financial controls and to minimise the impact of the political upheaval on the region's international image. “Catalonia has done very well at attracting international researchers and students and we would like that to continue,” says Casals.