Spain's ministry of science is the latest casualty of changes to the country’s government. Mariano Rajoy, leader of the newly elected right-wing People's Party that took over last month, pledged to reduce the number of ministries from 15 to 12 to save money and improve governance. Responsibility for science and research will now fall to the minister of economy and competition, Luis de Guindos.

Amaya Moro-Martín, a physicist at the Centre for Astrobiology in Madrid, says that researchers are alarmed by the signal this sends. “Many of the countries ranking higher than Spain in research and development have a specialized ministry,” she says. 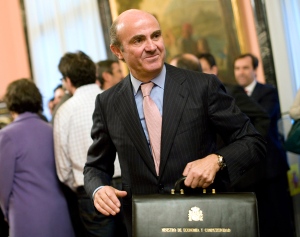 Responsibility for science in Spain has been given to the minister of economy, Luis de Guindos, an economist who previously worked at the investment bank Lehman Brothers.

Carlos Andradas, president of the Confederation of Spanish Scientific Societies (COSCE), warns that the change of government “should not imply a break or a downgrading in promoting scientific research”.

This is not the first time that Spanish researchers have been without a dedicated science minister. It was created for the first time in 2000, under a People's Party government, but fell under a joint ministry with education in the 2004–08 government, led by José Luis Rodríguez Zapatero's Spanish Socialist Workers' Party. From 2008-11 it again had a dedicated ministry.

The former science minister, Cristina Garmendia, a biologist who had started her own biotech company, raised scientists' hopes when she took charge in 2008 and promised to focus on updating the country's 1986 science law. However, the new law only came into effect in May 2011, and received mixed reviews (see 'Mixed feelings over Spanish science law'). The law now says that PhD students and technical staff must be hired through contracts and not fellowships; allows scientists to move more easily between the public and private sectors; outlines a strategy to coordinate the efforts of regional governments; and created a state research agency. In October, Garmendia also implemented a plan to promote research excellence — the Severo Ochoa programme — which gave a cash infusion to eight leading science centres and aims to support 32 more over the next 3 years.

But Garmendia’s term was hit by the country’s economic crisis, which forced two successive budget cuts in 2010 and 2011, reversing a trend that had more than doubled government investment in science since 2000. The weakness of her ministry was highlighted in 2009 when, in a government reshuffle, responsibility for universities was transferred to the ministry of education.

Andradas says that there may be benefits to moving the science portfolio within the influential ministry of economy because it is explicitly concerned with the country's development, but adds that “we hope the effort to coordinate funding calls and tasks will not be lost”.

But Andradas is concerned about the track record of the People's Party when it comes to science funding. In November, the regional government in the state of Valencia, also controlled by the People's Party, drastically cut funding for the Prince Felipe Research Centre, a flagship biomedical research facility created in 2005 in the city of Valencia (see 'Spanish institute faces cash crisis'). On 20 December, the day before the changes to the ministries were announced, the science ministry told researchers that the scheduled call for grant applications to the National Plan for Research and Development, the country’s main research funding line, will be postponed to allow the new government to fit it into its budget. “It would be a tremendous loss of money if we do not maintain the funding effort,” Andradas says.

Scientific organizations including COSCE are urging the new government to apply the science law passed in May. “A strong, independent state research agency should be implemented to allow continuity in science policy beyond political changes,” says Andradas.

Moro-Martín wants the “access contract” contained in the law to be transformed into a proper tenure track, but she is worried that the government’s plan to freeze hiring of new public servants will stop researchers in government-funded institutions from getting new contracts.