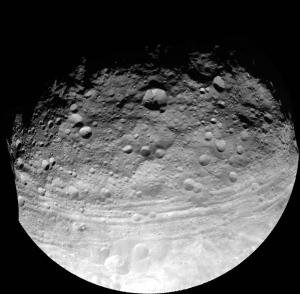 Features on Vesta can be located using two coordinate systems — the subject of scientific wrangling.

When NASA’s Dawn spacecraft departs from Vesta on 26 August, it will have mapped the second-most-massive object in the Solar System’s asteroid belt in unprecedented detail, revealing a diverse, planet-like body with sheer cliffs and deep craters.

But don’t ask for the latitude and longitude of those features. The mission team is embroiled in a dispute with the International Astronomical Union (IAU) in Paris over which coordinate system to use, and where to place the prime meridian from which longitude will be measured. At the moment, the groups each have their own meridians, separated by 155°: nearly half a world. “It’s an untenable situation to have an outside group that has no ownership, no belonging to the project, impose arbitrary things,” says Chris Russell, Dawn’s principal investigator and a planetary scientist at the University of California, Los Angeles.

Brent Archinal, chairman of the IAU working group responsible for coordinate systems, says that the Dawn team is welcome to use an alternate system for its own purposes. “That’s not what’s happening. They’re saying theirs is the only system,” says Archinal, a geodesist at the US Geological Survey in Flagstaff, Arizona.

The feud shows how the conquering instinct of a mission team sometimes falls foul of rules established by the IAU, which emerged as the arbiter of planetary names and coordinate systems during the early years of space exploration. Back then, standardization helped to prevent the Solar System from being plastered with conflicting sets of names used by Soviet and US scientists. These days, the tensions are less nationalistic and more interdisciplinary: a dust-up between the geologists who tend to lead planetary missions and the astronomers who comprise much of the IAU. “Why should I let astronomers name things just because they’re on another planet?” asks Mike Malin, a geologist and principal investigator for the mast camera on NASA’s Curiosity rover mission, which has generated its own conflict with the IAU over the naming of a feature at its Martian landing site. “It’s anachronistic,” adds Malin.

The IAU’s coordinate system for Vesta is based on observations from NASA’s Hubble Space Telescope. It was published1 in 1997, and puts the prime meridian at the centre of Olbers Regio, a dark, circular region 200 kilometres across.

After Dawn began orbiting Vesta in July 2011, the mission team found that the rotational pole in the IAU’s system was off by as much as 10°. The team established its own coordinate system, which not only corrected the pole, but also focused the prime meridian on Claudia, a 700-metre crater. The Dawn team says that Claudia can be defined much more precisely than Olbers, and that its system produces more logical mapping quadrangles. NASA has released images that refer to the Claudia system, and the Dawn team has published papers using it, including a suite of articles2–7 that appeared in Science in May.

The Claudia system is not acceptable to the IAU, which states in its guidelines8 that changes to any established coordinate system should be avoided unless there has been a loss or change to the meridian-defining feature. But Russell says that the Dawn team will continue to publish using Claudia: “We cannot afford to change to a new coordinate system.”

Michael A’Hearn, a planetary scientist at the University of Maryland in College Park, is trying to find a compromise. A member of the IAU working group, A’Hearn is also in charge of the part of the NASA database that will host Dawn data for the public — and he says that the data must use an IAU-sanctioned coordinate system. He suggests rotating the Claudia system by 155°, to put the prime meridian within one degree of the centre of Olbers Regio. That would preserve the pole correction but keep the meridian close enough to Olbers to satisfy the IAU rules.

Mark Sykes, director of the Planetary Science Institute in Tucson, Arizona, and a co-investigator on Dawn, says that the entire episode is silly and counterproductive: “Now we’re going to have three systems in the literature.” But he is not too surprised. “When an organization sets itself up as the holy mother church,” he says, “you’re always going to get heretics.”

Such disputes are unlikely to hinder science in the long run, but they can sow short-term confusion. Mars, which has been visited more than any other Solar System body in the past two decades, offers several examples. The latest concerns Curiosity, which touched down on 6 August.

The rover’s chief target is a 5.5-kilometre-tall mountain in the middle of Gale crater9. Early this year, the mission’s science team asked the IAU to name the feature Mount Sharp, after Robert Sharp, a planetary geologist at the California Institute of Technology (Caltech) in Pasadena, who died in 2004. But that fell foul of the IAU rule book. Brad Smith, a retired astronomer and chairman of the IAU’s Mars task group, points out that large features such as mountains must be named in Latin, after nearby light and dark features discerned on Mars by nineteenth-century astronomers. In May, the mountain was granted such a name: Aeolis Mons. (Craters can be named after people, however, so Sharp got a 152-kilometre crater just west of Gale.)

But the NASA team has been referring to the mound as Mount Sharp in public discussions and press releases. Curiosity project scientist John Grotzinger, a Caltech geologist, says he is “not trying to break the law” — rather, he wanted a user-friendly name similar to that of Mars’s Columbia Hills, which were named to commemorate the 2003 space-shuttle disaster soon after they were discovered by NASA’s Spirit rover in 2004. Smith says that the hills are big enough to get an official name, but none was ever requested, so the informal name stuck.

In future, says Grotzinger, the Curiosity team will use Aeolis Mons on official maps, and will indicate in publications that Mount Sharp is an informal name.

That is fine with Smith, who points out that the Curiosity team can do whatever it wants in an unofficial capacity. “There’s perhaps more drama being made about all this by the media than meets reality,” he says.