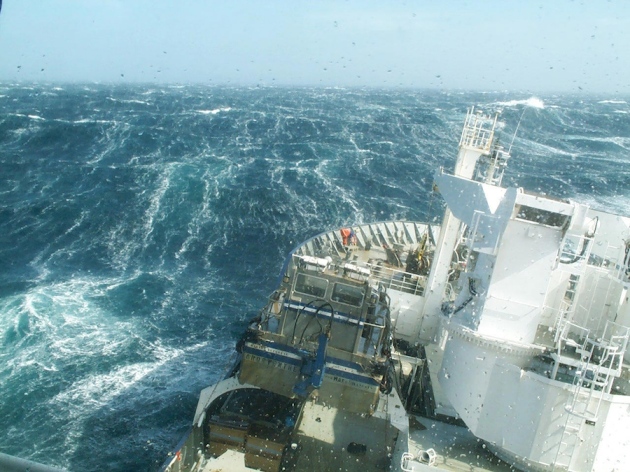 A ship from the Indian Observation Service (OISO) takes measurements in rough seas in the Southern Ocean.

The Southern Ocean, which each year soaks up billions of tonnes of carbon dioxide from the atmosphere, has reversed a worrying decline in its annual intake of the greenhouse gas.

The finding comes as little surprise to climate scientists, who thought it inevitable that at some point the vast ocean around Antarctica would start absorbing more CO2 as atmospheric concentrations of the gas rise. But the study1 — which pulls together millions of scattered field observations — brings a much clearer understanding of the variable activity of the Southern Ocean as the world’s most important buffer against global warming. The work was published on 11 September in Science.

In 2011, the ocean took in 4.4 gigatonnes of CO2, according to the study — more than 10% of the CO2 emitted by human activity at the time. That was roughly double what it absorbed a decade earlier.

The increase marks a sharp turnaround from simulations published a few years ago2, 3, 4, which suggested that the ocean’s ability to absorb CO2 had dropped in the 1980s and 1990s, and predicted that this trend would continue.

“It doesn’t mean that our [climate-change] projections for the future are going to change dramatically,” says Nicolas Gruber, an environmental physicist at the Swiss Federal Institute of Technology in Zurich, who co-authored the latest paper. Rather, he says, the study shows that the ocean’s ability to absorb carbon changes more drastically than researchers had anticipated.

An international collaboration began in 2007 to pool global CO2 data for the surfaces of oceans. Gruber and his colleagues used almost 3 million surface CO2 readings from this database for their analysis. Whereas earlier researchers had interpolated between sparse readings to provide a rather inaccurate picture of the ocean’s CO2 uptake, the latest work relies on other measurements of properties such as surface temperature and salinity to fill the gaps.

Gruber’s reconstructed history of the ocean, from 1982 to 2011, shows clearly that it has been increasing its carbon uptake since the early 2000s. It also confirms the slowdown previously reported for the 1980s and 1990s. At that time, wind patterns pushed the Southern Ocean’s surface water northward, leading to an upwelling of water from its depths. Because this water was already heavily concentrated in CO2, the ocean’s ability to take in more of the gas declined.

Christoph Heinze, a biogeochemist at the University of Bergen in Norway, says that he is excited by the latest study, because it allows researchers to accurately monitor the Southern Ocean’s variations. Heinze says that climate models have assumed that oceanic uptake of CO2 varies less than land uptake (in part because the land sees continual fluctuations in factors such as deforestation and agricultural practices). But the new study suggests that may not be true. Knowing this should help researchers to more accurately predict how land, oceans and atmosphere will respond to ever-increasing CO2 emissions — and thus, to the effects of climate change.

Gruber notes that increasing CO2 absorption may also be causing the ocean’s water to become more acidic, which could interfere with the formation of the calcium-carbonate-based shells of some marine organisms that live there. And, he adds, climate scientists cannot rely on the Southern Ocean to remain a strong carbon sink: “At the moment it’s very strong, it’s very good, but I don’t think we can automatically assume it will stay that way.”