South Korea has today launched an ambitious institute that it hopes will eventually rank alongside Germany’s Max Planck Society and Japan’s RIKEN as one of the world's leading basic-research institutions. The government intends the Institute for Basic Science (IBS), headquartered in Daejeon, to make South Korea a guiding force in developing new technologies.

"We have so far copied and pursued advanced technologies," said South Korean President Lee Myung-bak in a speech at the inauguration of the institute. "However, in order to make a leap into the ranks of advanced, first-class nations, we must develop a history of creation based on basic science and fundamental technologies." 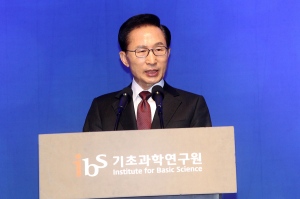 South Korean President Lee Myung-bak wants the country to becaome a leader, rather than a follower, in basic research.

Lee promised to provide unstinting support to make the IBS a "dream institute", attractive to the best scientists from around the world.

The government last year enacted a law to develop a project called the International Science and Business Belt (ISBB), of which the IBS is one of the main initiatives. The ISBB project will have 5.17 trillion won (US$4.4 billion) until 2017 to run the IBS and build the nation’s first rare-isotope accelerator, among other projects.

The IBS plans to attract 3,000 researchers and staff members to 50 research centres in Daejeon and around the country. Each centre will have an average annual budget of 10 billion won, and will be directed by a world-class scientist, employed on a 10-year contract. The directors will be given a great deal of autonomy to decide on a research focus, recruit staff and run their centres.

Se-Jung Oh, a physicist and president of the IBS, says that the institute will encourage creativity and risk-taking. In the past, he says, "big penalties have been imposed on scientists whose research failed. And those with the most publications usually got a good assessment. However, now is the time to kick off more adventurous and creative research to pioneer a new field and we will no longer count the number of publications. Moreover, it’s okay to fail. We just want them to be more adventurous."

The IBS will specialize in long-term projects that require large groups of researchers, and so can't usually be done at universities and other research centres. "We will focus on the fields in which we are particularly good and competitive enough to be top-class in the world,” says Oh. “We will also select fields that are important to the nation and the world, such as climate change."

Following a global trend, the institute will take life sciences as its top priority, with more centres dedicated to this field than any other. Fields that require large-scale experiments, such as astronomy and physics, will be next, followed by chemistry, mathematics and Earth science, says Oh.

But some researchers in the country are concerned about the huge scale of investment in the IBS. Han Woong Yeom, a physicist at the Pohang University of Science and Technology, warns that focusing so much funding on a small group of privileged scientists could drain resources for other research projects.

In South Korea, he says, “the biggest financial aid for individual research groups in basic science so far has been 1.5 billion won, ten times less than at the IBS centres. The IBS research centres could monopolize the human resources and ruin the small-sized research projects outside of the IBS.” Yeom adds that the main problem currently facing South Korea’s researchers is not a lack of investment, but a shortage of manpower.

Oh acknowledges that such anxieties could also spill over into complaints about an imbalance in the scientific disciplines represented at the IBS, and the geographical spread of the research centres. “This is a national project, so people must politically agree on such imbalance, which makes me somewhat concerned,” he says. But if the institute is successful, the country's scientists will accept it eventually, he adds.