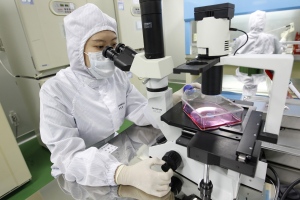 South Korea's government is focused on boosting funds for stem-cell research this year.

The South Korean health ministry announced last month that research into stem cells and regenerative medicine will receive a funding boost of 33 billion won (US$29 million) in 2012, four times that given in 2011. Overall, six different ministries will invest 100 billion won in stem-cell research this year.

Until last year, public investment in stem cells in South Korea was relatively low and targeted mainly at basic research. But the country's Ministry of Health and Welfare is now expanding its support for clinical research on stem cells, with the money being used to link basic research to intermediate or clinical studies. The aim is to commercialize the research at an early stage.

"From the current research atmosphere and infrastructure, the government has judged that stem-cell studies are now maturing," says Hyung Min Chung, president of Seoul-based biotechnology firm Cha Bio and Diostech and an adviser on the budget plan. He adds that his company is particularly pleased that government investment decisions on developing stem-cell therapies will be made more quickly.

The government money will be allocated to two areas: rare or incurable diseases for which there is little incentive for private investment, such as spinal cord damage; and common chronic conditions, such as arthritis, for which the aim is to help South Korean companies to capture part of the large potential market for treatments.

South Korea has been trying to restore its tarnished image in the field after the fall of one of its stellar stem-cell scientists, Woo Suk Hwang, who was convicted in 2009 for embezzlement and bioethics violations after falsifying results. The country has begun to regain confidence from a series of successful research projects, and is ranked in the world's top ten for stem-cell and regenerative medicine research in terms of number and quality of publications. The South Korean government thinks that the country can be a top global competitor if the field is given enough support.

In the past year, the South Korean Food and Drug Administration (FDA) has approved the world’s first three stem-cell treatments — Hearticellgram-AMI, Cupistem and Cartistem — which followed on the heels of clinical tests for human embryonic stem-cell therapies approved in 2010, according to the health ministry.

But many are still wary of those therapies. “Clearly, there has been increased international focus on what is going on in the Korean regenerative industry since the approval of three stem-cell products in the past year, which I think caught many industry observers off guard,” says Douglas Sipp, who works on stem-cell policy and ethics at the RIKEN Center for Developmental Biology in Kobe, Japan. "It appears that the Korean FDA has been focusing on fast-tracking products through the approval pathway,” he says, adding that it will be interesting to see what other regulatory authorities think about these products.

Dong Wook Han, a professor of stem-cell biology at Konkuk University in Seoul, is worried about how the country regulates clinical research on stem cells. "Compared to a country like Germany, where I studied and where the regulations on embryonic stem cells are much stricter, South Korea has more freedom in regulation, which means it can explore more opportunities in clinical research.” However, he emphasizes that “instead of moving too quickly, South Korea needs to adopt the stricter regulations from other countries to test safety and efficacy.”