Just as sailboats use wind pressure to propel through water, solar sails use the pressure from light radiated by the sun to move through space. Once the province of science fiction authors such as Arthur C. Clarke, solar sailing is gradually moving into the realm of reality. A privately funded $4.5-million mission to test solar sailing technology called LightSail now has a launch date in April 2016 and a ride to space onboard SpaceX’s Falcon Heavy rocket. Once in orbit, LightSail 1 will make maneuvers using sunlight, rather than rocket fuel. “Solar sailing has been under development at a slow pace for a lot of years,” says LightSail Project Manager Doug Stetson of the nonprofit Planetary Society, which is organizing and funding the mission. “The reason it’s hung on all these years is because of the potential for basically free propulsion throughout the solar system.”

LightSail 1 is a small spacecraft made of a stock of three 10-centimetre-wide squares called CubeSats. After being carried to medium Earth orbit — more than 2,000 kilometres above the planet, high enough to escape most of its atmospheric drag — LightSail 1 will deploy four ultrathin Mylar sails that will stretch to 32 square metres (potentially large enough for naked-eye observers to spot from the ground). These sails will be bombarded with sunlight and each light particle, or photon, that impacts them will impart a tiny bit of momentum. Added up, those tiny bits should be enough to move the spacecraft without the need for heavy and expensive chemical propellant. If LightSail’s orbital speed increases once it deploys its sail, engineers will know it works.

In theory, solar sailing should be powerful enough to propel a spacecraft out of Earth orbit and into the solar system. “The disadvantage to that is it takes a long time [to move], just like it takes a lot longer to sail to the Bahamas than drive a speedboat,” Stetson says. Still, in space beyond Earth’s atmosphere without friction to stop it, once a solar sail gets going, it keeps accelerating as long as sunlight keeps hitting it. That makes solar sails an appealing option to explore the whole of the solar system and beyond. Many experts say they’re the likeliest candidate to propel the first interstellar mission to another star, with extra thrust supplied by a laser, perhaps stationed in orbit around the sun, aimed at the sail in addition to sunlight. One downside, however, is that solar sails don’t come with brakes or any means of changing trajectory or slowing down once they’re zooming. One possible solution is using a planet or star’s gravity to decelerate the craft or slingshot it along a desired path.

Those considerations are beyond the scope of LightSail 1, which simply aims to prove that the basic technology is sound — especially for maneuvering lightweight, low-cost spacecraft such as CubeSats, which despite their small size can still pack enough instruments for basic science, navigation and communication. “We really hope that this concept of using CubeSats and solar sails together really takes off,” Stetson says. “There could be a whole new domain of solar system exploration missions that could be very inexpensive.”

LightSail 1 will fly on a privately funded vehicle — the Falcon Heavy rocket being developed by the commercial spaceflight company SpaceX. The firm’s smaller Falcon 9 rockets have established a reliable track record but the heavy version, powerful enough to travel beyond low Earth orbit — or LEO, 160 to 2,000 kilometres high — has yet to fly. Solar sails require such a significant initial push because the atmospheric drag in LEO is too strong for them to operate.

LightSail 1 will not be the first-ever solar sailing mission. The Planetary Society itself tried to launch a solar sail called Cosmos 1 in 2005, but a rocket failure doomed the mission. In 2010 Japan successfully flew the Interplanetary Kite-craft Accelerated by Radiation Of the Sun (IKAROS), which launched along with a spacecraft bound for Venus and used a solar sail as its main means of propulsion. Later that same year NASA launched the NanoSail-D mission, which deployed a small sail in LEO. Despite its low altitude, the mission successfully deployed its sail, although it didn’t use it to fly. NASA is also planning a larger solar sailing mission called Sunjammer, which was originally scheduled to launch in 2015. After a recent technology review, however, the agency delayed the mission indefinitely. Still, LightSail 1 is notable because, if successful, it will be the first to demonstrate controlled solar sailing for CubeSats.

NASA has two more solar sailing missions in the works, both using CubeSats. Lunar Flashlight will search for ice deposits in craters on the moon and Near-Earth Asteroid Scout will visit a local space rock to see if it might make a good destination for a later human mission. Both are slated to fly on the first liftoff of NASA’s next heavy-lift rocket, the Space Launch System, in 2017. If they launch, they will be among the first solar sail missions whose primary purpose is science, not simply a technology demonstration. “No one has built a solar sail to do as complex a mission as either of those,” says Robert Staehle, assistant division manager for advanced concepts at NASA’s Jet Propulsion Laboratory. Those two missions are partly to mature the technology of solar sailing, he says, but primarily NASA is “counting on the solar sail to get the scientific payload to a specific orbit.”

If LightSail 1 is a success, it could help pave the way for those missions. “Of the techniques I’ve seen so far, I think LightSail is the most mass-and-volume efficient,” Staehle says. “What LightSail is doing is putting everything in a smaller package, making it less expensive, and I think in some ways that will reduce the risk in the eyes of NASA for the Lunar Flashlight and Scout missions.” 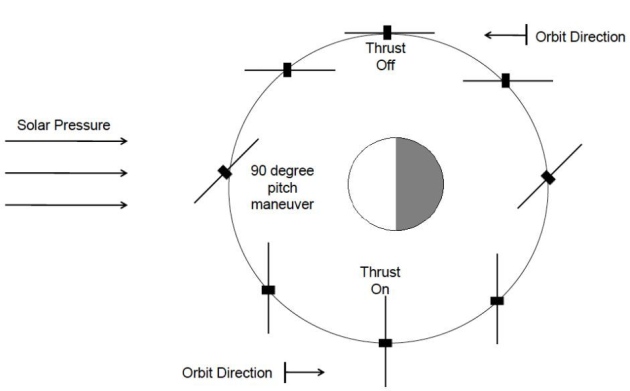 LightSail-1 will make two 90° pitches during an orbit to get propelled by the Sun's rays.