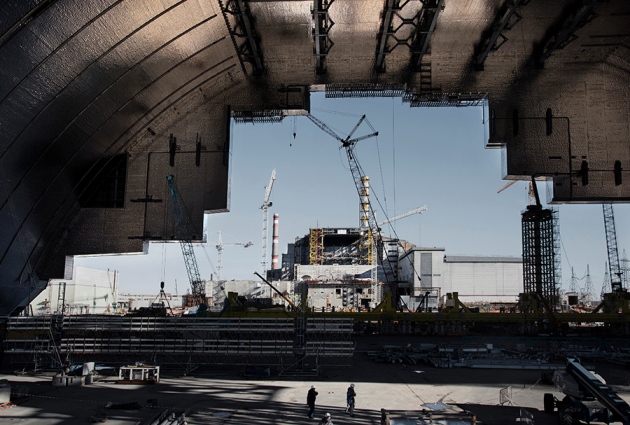 The wasteland around the shuttered Chernobyl nuclear site is set to be home to a solar power plant.

Wind and solar power are wallflowers in oil- and gas-rich Russia. Not so in neighbouring Ukraine. With fears about Russian hegemony at a peak, the former Soviet republic is ready to join the renewables revolution.

“Energy independence has become a matter of national security for Ukraine,” says Sergiy Savchuk, head of the state agency on energy efficiency and energy saving in Kiev. “That’s why renewable-energy development is now a priority issue for the Ukrainian government.”

In July, Ukrainian environment minister Ostap Semerak unveiled plans to build a large solar power plant and a biogas facility in the wasteland around the former Chernobyl reactor.

The announcement came just two weeks after parliament reopened the state-owned exclusion zone around the shuttered nuclear site to development for business and science.

The Chernobyl energy project will cost around US$1.1 billion, a sum that means substantial foreign investment is required. It is part of Ukraine’s broader ambition to step up renewable-energy capacity. According to the National Renewable Energy Action Plan adopted in 2014, the government aims to almost triple capacity for electricity production, transport and heating by 2020 — from its current level of around 9.3 gigawatts to more than 26 gigawatts. Renewables would then supply about 11% of all energy consumed in Ukraine.

“Energy independence has become a matter of national security for Ukraine.”

Despite the traumatic Chernobyl reactor meltdown in 1986, which contaminated large parts of Europe and tempered Ukraine’s nuclear ambitions, the country continues to produce about 50% of its electricity from a fleet of 15 Soviet-built nuclear reactors.

Ukraine also depends heavily on oil and natural gas imported from Russia. But political turmoil over Russia’s annexation of the Crimean peninsula in 2014 and ongoing pro-Russian unrest in the eastern Donbas region led to the strategic rethink. Already, Ukraine has reduced its reliance on Russian fossil fuels, cutting consumption of natural gas by about one-third since 2013.

Ukraine has significant untapped renewable-energy potential, finds a 2015 report by the International Renewable Energy Agency (IRENA) in Abu Dhabi, United Arab Emirates — enough to support the 2014 plan. The largest country to lie entirely within Europe (Turkey and Russia are mostly in Asia), it gets more sunshine than Germany, where photo-voltaic solar power now exceeds 40 gigawatts.

But the economic environment is less favourable, Gielen says. Electricity demand has declined in the years since the conflict with Russia escalated, and is mostly met by existing nuclear and fossil-fuel sources. More-over, the exceedingly high cost of investment in the politically unstable country might discourage potential backers. As the first phase of implementing the 2014 action plan, Ukraine is scheduled to build 51 solar-power and 15 wind-power projects — an endeavour that will cost an estimated $7 billion.

“Financing renewables in Ukraine is comparable to investing in parts of Africa,” Gielen says. “Investors such as the European Bank for Reconstruction and Development might still be interested, but the Chernobyl solar plant certainly can’t be a purely commercial project.”

In Russia, things are different. Solar plants on the annexed sunny Crimean peninsula have some 300 megawatts of capacity. But elsewhere, utility-scale wind and solar plants are almost non-existent.

The Russian government does aim to tap the renewable-energy potential afforded by the country’s Arctic regions, which are sun-drenched during northern summers, and its warm, windy southern steppes. Hydropower already provides 17% of Russian electricity, but by 2020, other renewables will supply 4.5%, up from less than 1% currently, according to the Kremlin’s energy strategy.

Yet experts doubt the target is achievable. “Manufacturing limitations mean that Russia produces almost no wind turbines and solar panels,” says Deger Saygin, a programme officer for IRENA in Bonn. Foreign capital has been in short supply, because economic sanctions imposed by the European Union and the United States in response to Moscow’s seizure of the Crimea unsettled potential investors.

In the short term, Saygin says, small, off-grid renewable-energy systems in Siberia and Far Eastern provinces such as Kamchatka — where scattered communities, mines and small industries have long relied on diesel generators — are Russia’s prime opportunity in the clean-energy market. There are currently 13 solar plants operating in Yakutia, including the largest solar plant north of the Arctic Circle, and some wind farms in Kamchatka. “Renewable energy in Russia,” says Saygin, “is mainly driven by Siberia’s distance from the national grid.”

An earlier version of this article gave the wrong year for the annexation of the Crimean peninsula.