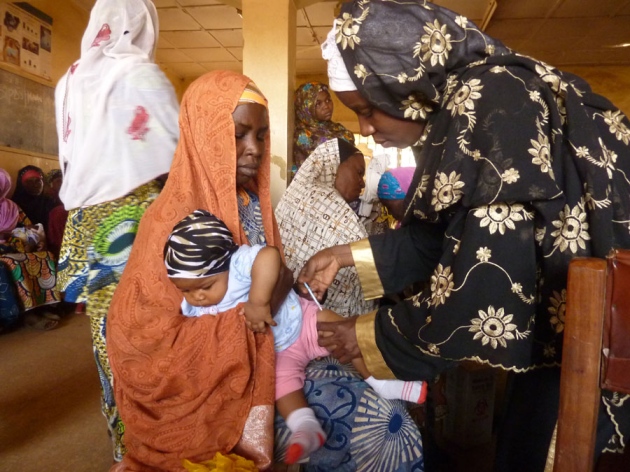 A health worker vaccinates a child against polio in Kano, northern Nigeria, in 2013.

Update (24 July): On 24 July, Nigeria marked its first year with no new polio cases. Samples will continue to be analysed for several weeks, and it will still be some time before Nigeria can be officially removed from the list of polio-endemic countries.

Just three years ago, Nigeria was a threat to the global push to eradicate polio. Africa’s most populous nation recorded 122 cases in 2012, more than all other countries combined, and funders of the eradication campaign were growing exasperated with the nation’s faltering vaccination efforts and exportation of cases. Now Nigeria is on the brink of being free of the virus, thanks in large part to its embrace of innovative approaches to vaccination and public health.

On 24 July, Nigeria will mark one year since it recorded a case of polio caused by the wild virus (mutated versions of live vaccine strains may still be circulating in poorly vaccinated areas but are considered easier to control than wild strains). If reached, this landmark will set the stage for polio’s official eradication in Africa — which can only be declared after the region has been free of the virus for three consecutive years — and leave Pakistan and Afghanistan as the only remaining hosts of wild poliovirus.

A global eradication push began in 1988, when 350,000 cases were recorded worldwide. By 1994, the Americas were polio free, and by the early 2000s Europe and most African countries had vanquished the virus (India followed much later, recording its last known case in 2011). But polio persisted in parts of Asia and in Africa, where the vast majority of cases were in northern Nigeria. Rumours that the vaccine caused sterility led to boycotts by several Nigerian states in 2003 and contributed to a bounce in cases (see ‘Rise and fall of polio’) that spread the virus back to many countries in Africa, and as far afield as Indonesia.

Complacency at all levels of the Nigerian government meant that vaccine campaigns were often incomplete. Worsening security in the country’s north-east — large parts of which were, and still are, under the control of the Islamic militant group Boko Haram — made matters worse. “If you want to know anything about polio not going right, this is the place to come,” said a veteran of India’s successful eradication campaign back in December 2012, while working on the Nigerian campaign.

Eventually, pressure from other African countries convinced Nigeria’s leaders to take polio seriously, says Heidi Larson, an anthropologist at the London School of Hygiene & Tropical Medicine who studies vaccination. Meanwhile, as they saw children continue to be crippled by the disease, religious and traditional leaders in the Muslim-dominated north started to support, rather than oppose, polio eradication. 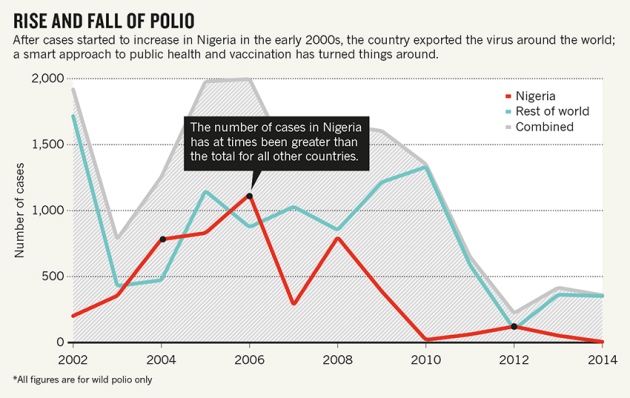 In 2012, Nigeria created a national emergency operations centre to coordinate anti-polio efforts between government and international organizations, such as the World Health Organization (WHO); similar hubs followed in key northern states. Efforts turned to identifying and mapping communities that had been routinely missed in vaccination campaigns, such as nomadic groups, people living near state and local borders and those who turned vaccinators away. “You probably have the best maps of all of Africa in northern Nigeria,” says Michael Galway, who heads polio eradication efforts at the Bill & Melinda Gates Foundation in Seattle, Washington.

Vaccination teams carried detailed ‘micro-plans’ that identified each house to visit and global-positioning units that meant their supervisors could ensure the plans were followed. In areas in the north-east that were controlled by Boko Haram, health officials mounted ‘hit and run’ campaigns, rapidly vaccinating children on short notice when security conditions allowed.

Daniel Santong, a Nigerian field epidemiologist who is part of a US Centers for Disease Control and Prevention effort to map nomadic communities, says that most of the Fulani people he tracks welcome polio vaccination of children, and that more-sceptical communities have been won over with health camps that provide care and medicines to adults in remote areas. “This attracts them to bring their children to come to immunization,” he says.

Nigeria’s success in battling polio has been aided by its embrace of vaccine research, notes Nicholas Grassly, an epidemiologist at Imperial College London. When clinical results showed that an oral vaccine against the two types of poliovirus that were still circulating in the wild was more effective than a vaccine against all three strains1, Nigerian campaigns quickly adopted it. And last year, the country delivered injectable polio vaccines to more than 3 million children in high-risk areas after studies showed that children who had previously received an oral version received an added immune boost from the jab2, 3. Grassly says that injectable vaccines will be especially important in eradicating the last pockets of vaccine-derived polioviruses.

Assuming that no new polio cases are recorded after 24 July, samples from around Nigeria will be analysed for traces of the disease. If no sign is found, Nigeria will be removed from the list of polio-endemic countries, probably in late August or early September, says Hamid Jafari, the director of the Global Polio Eradication Initiative at the WHO. Africa could then be declared polio-free as soon as August 2017 — 3 years after the continent’s last known case, in Somalia, in August 2014, which was caused by a virus imported from Nigeria.

Attention is then likely to shift to Pakistan and Afghanistan, where a combined total of 29 polio cases have been reported so far this year; a vast improvement from a year ago. Twenty-five of those cases were in Pakistan, which recently opened an Emergency Operations Centre that was modelled on Nigeria’s, Galway notes. Nigeria’s success in vaccinating children in Boko Haram-controlled areas suggests that the security challenges in Afghanistan and Pakistan are not insurmountable, says Larson. “I think that polio will go on to be eradicated,” adds David Heymann, chair of Public Health England and former head of the WHO’s polio eradication programme.

But Nigeria must guard against complacency, says Jafari. “We clearly need more and more surveillance to be comfortable that transmission has been interrupted,” he says, pointing out that remote areas of neighbouring Chad, Niger and Cameroon have not received the same level of attention as Nigeria in terms of surveillance for the virus and vaccination. Galway agrees: “The biggest risk we face is falling back and saying we’re finished when we’re not.”