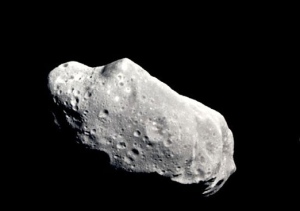 Asteroids like Ida 243 may have spent their early years as cosmic mudballs.

Space rocks, or asteroids, might not have begun their lives rocky at all. In the early Solar System, they may have been churning balls of mud.

Bland presented the findings on 18 March at the Lunar and Planetary Science Conference in The Woodlands, Texas.

The idea could reconcile several seemingly contradictory lines of evidence about whether water flowed inside early asteroids. Certain meteorites — chunks of asteroids that have made it to Earth — show textural evidence of having been altered by water flowing through them. But their chemical make-up is otherwise quite constant, which suggests that little to no fluid has ever been present.

Scientists haven't been able to model asteroid interiors in a way that could explain water both flowing and not flowing within. So Bland started thinking about what an early asteroid might have looked like. “The initial assumption is that it’s a rock,” he says. “I thought, let’s think about the possibility that it’s not.”

He and his colleagues considered several model asteroids, 100 kilometres in diameter, that were unconsolidated mixtures of coarse and fine particles, plus ice. The team ran numerical simulations that calculated how the asteroids’ insides would evolve over time.

In three cases representing different combinations of materials, the asteroid’s surface remained an icy shell several kilometres thick. But heat produced by the decay of radioactive elements began melting ice deeper inside the asteroid, and the interior started churning with strong convective motions, like a pot of water put on to boil.

In the simulations, the convection continues for a few million years before the radioactivity fades and the asteroid’s interior freezes again. That’s long enough to mix everything so thoroughly that the overall chemical make-up ends up constant, Bland says.

The work helps to explain how a large volume of material could be altered all at once, thus providing a bigger reservoir from which meteorites could have come. “If you say the system was melting and convecting because it was mud, then it becomes a more tractable problem,” says Steven Hauck, a planetary scientist at Case Western Reserve University in Cleveland, Ohio.

Still, Bland admits he has no way to test this mud-asteroid idea against real observations from spacecraft. In early 2015, NASA’s Dawn mission will arrive at the asteroid Ceres, which some scientists think has a watery outer shell overlying a rocky core. But this leg of Dawn's journey may not offer the answers Bland is looking for.

At nearly 1,000 kilometres across, Ceres is the biggest asteroid by far, and it’s not clear whether the mud-asteroid theory would apply to something so large. Other factors are probably involved in shaping the insides of big asteroids, says Julie Castillo-Rogez, a planetary scientist at NASA's Jet Propulsion Laboratory in Pasadena, California. Their sheer size means they contain a bigger dose of radioactive elements than their smaller counterparts — perhaps producing enough heat to separate rock and ice into entirely different layers.