Charles Darwin was not a plagiarist, say two researchers who aim to refute the idea that Darwin revised his own theory of evolution to fit in with one proposed by fellow naturalist Alfred Russel Wallace.

The accusation has received little support from serious historians of Darwin’s life and work, who say that Darwin and Wallace came up with the theory of evolution by natural selection independently at more or less the same time. But it has proved hard to dispel, thanks to some vociferous advocates of Wallace’s primacy. 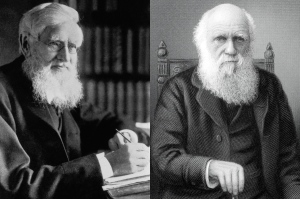 Alfred Russel Wallace (left) and Charles Darwin (right) came up with the theory of evolution by natural selection independently at more or less the same time.

In 1858, Darwin received a letter from Wallace, written on the island of Ternate in Indonesia. It included an essay in which Wallace described a theory of evolution that he had developed, which he asked Darwin to pass on to noted geologist Charles Lyell. Darwin's accusers claim that he waited two weeks to do so, lying about the date of receipt to give himself time to revise his own ideas in the light of Wallace’s.

The most extreme accusation came in a 2008 book, The Darwin Conspiracy: Origins of a Scientific Crime by Roy Davies, a former documentary-maker for the BBC. “Ideas contained in Wallace’s Ternate paper were plagiarised by Charles Darwin”, wrote Davies, who called this “a deliberate and iniquitous case of intellectual theft, deceit and lies”.

But after inspecting historical shipping records, John van Wyhe and Kees Rookmaaker, curators of the Darwin Online and Wallace Online archives, and historians of science at the National University of Singapore, claim that Wallace’s letter and essay could not in fact have arrived sooner than 18 June, the very day that Darwin wrote to Lyell that he had received it. They published their results this month in the Biological Journal of the Linnean Society1.

Darwin had begun work on the text that became On the Origin of Species in the early 1840s, but had dallied over it. In his letter to Lyell, he rued his own dilatoriness. “I never saw a more striking coincidence,” he said. “If Wallace had my M.S. sketch written out in 1842 he could not have made a better short abstract!”

At the urging of Lyell and botanist Joseph Hooker — but not without misgivings about whether it was honourable — Darwin wrote up his own views on evolution in a paper was presented alongside Wallace's at the Linnean Society, a biological society in London, on 1 July. On the Origin of Species was published in 1859.

To clear Darwin of the accusations against him, van Wyhe and Rookmaaker have painstakingly retraced the path of Wallace's letter from Indonesia to England. Using sailing schedules of mail boats, they indicate that the letter could not have left Ternate sooner than about 5 April 1858. It was shipped through Jakarta, Singapore and Sri Lanka, and then carried overland from Suez to Alexandria. “We found that Wallace’s essay travelled across Egypt on camels,” says van Wyhe. “It’s a rather charming image to think of this essay that will change the world swaying on the back of a camel for two days.”

The researchers say that the letter then passed by boat through Gibraltar to Southampton in England, arriving on 16 June. It was taken by train to London and arrived at Darwin’s house outside London on the morning of 18 June.

The dispute about attribution would probably have mystified Darwin and Wallace, who remained respectful towards each other throughout their lives. And most modern researchers are dismissive of the claims. “I'm not sure there really ever has been a controversy over this within the history-of-science community,” says John Lynch, an evolutionary biologist at Arizona State University in Tempe, who has written extensively on cultural responses to evolutionary theory. He says that the claims of plagiarism “have had marginal, if any, influence — the evidence has failed to convince most readers”.

But van Wyhe says that “these conspiracy stories are very widely believed. Thousands of people have heard that something fishy happened between Darwin and Wallace. I hear these stories very often when I give popular lectures.”

James Lennox, a historian of science at the University of Pittsburgh in Pennsylvania, says that although the latest work undermines the conspiracy theory, he doesn’t think it will neutralize it. “For a variety of different motives, there will, I fear, always be people who see it as their mission to attack Darwin's character as a way of undermining his remarkable scientific achievements,” he says.