Marine threats The world’s oceans face greater danger from human activity than is generally recognized, said marine scientists from the International Programme on the State of the Ocean on 3 October. The group warns that the severity of pollution, overfishing and climate change is being ignored or going unnoticed, and that risks to marine ecosystems have been “significantly underestimated” in previous analyses. The group, backed by the International Union for Conservation of Nature, calls for community management of marine resources, international governance of the high seas and reductions in carbon emissions. 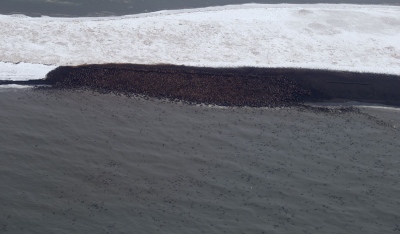 Walruses seek shelter on land Roughly 10,000 walruses have come ashore in Alaska (pictured) because of a lack of sea ice, the Associated Press reported on 1 October. The animals began gathering on a barrier-island beach near the village of Point Lay in mid-September, according to aerial surveys conducted by the US National Oceanic and Atmospheric Administration. Female walruses and their calves normally spend the summer and early autumn in the Chukchi Sea, drifting north on sea ice that gives them a platform from which to dive for clams, worms and snails. But a lack of ice this year forced them to shelter on land, placing the skittish animals at risk of stampede as they crowd together. In 2009, 130 young walruses died in a stampede near Icy Cape, Alaska.

University rankings The California Institute of Technology in Pasadena has topped an annual list of the world’s best universities, for the third consecutive year. Many European institutions’ rankings dropped from previous years, whereas the leading universities in Japan, Singapore, South Korea and China made advances. The list, released on 2 October, is published by the London-based magazine Times Higher Education, using information from data company Thomson Reuters to score categories such as teaching, research and citations.

ALMA milestone Less than one month after resolving a major labour dispute (see Nature http://doi.org/n37; 2013), the Atacama Large Millimeter/submillimeter Array (ALMA) observatory in Chile announced the completion of its antenna-construction phase on 1 October, when the last of 66 research radio antennas was delivered to the site. North American partners in the US$1.4-billion project have provided 25 antennas; European collaborators have delivered 25; and Asian partners have contributed 16. By the end of the year, all of the antennas are expected to be working together as a single telescope.

Comet flyby Astronomers got a sneak peek at the much-anticipated comet ISON on 1 October, when it passed within 11 million kilometres of Mars. The Mars Reconnaissance Orbiter snapped images of the comet, which will fly within 1.2 million kilometres of the Sun in November. Not all ISON studies have gone so well: a NASA balloon-borne mission to study the comet experienced a problem after its launch on 28 September and could not collect crucial data.

HIV-antibody trials The US National Institute of Allergy and Infectious Diseases last week began the first human trials of an antibody to block infection by most strains of HIV. Three HIV-infected adults were infused with the VRC01 antibody, said principal investigator Barney Graham on 3 October. The study will eventually test the antibody’s safety in at least 15 people, but no more participants can be enrolled until the US government reopens. If proved safe, VRC01 might be tested on babies in the United States and Africa (see Nature 493, 279–280; 2013).

Journal sting The outcome of a ‘sting’ operation described in Science last week suggests that peer review is inadequate or non-existent at many open-access journals that charge publishing fees. Journalist John Bohannon sent concocted and obviously flawed papers to 304 journals, 157 of which accepted the papers for publication. The Open Access Scholarly Publishers Association, based in Utrecht, the Netherlands, said in a response that the report was useful but limited, as Bohannon did not select the journals at random or include subscription-based publications or open-access journals that do not charge publishing fees as controls.

Nobel prizes Neuroscientist Thomas Südhof and cell biologists James Rothman and Randy Schekman have won this year’s Nobel Prize in Physiology or Medicine for their discoveries of mechanisms that regulate vesicles — structures that transport molecules within and between cells. The physics prize went to François Englert and Peter Higgs for their discovery of what is popularly known as the Higgs boson. See pages 149 and 150 for more. Nature went to press before the chemistry prize was awarded, but full details will be available at go.nature.com/a4gvbl. 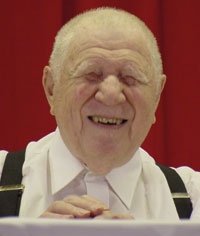 National Federation of the Blind

Braille coder dies Abraham Nemeth (pictured), the blind designer of an internationally recognized Braille code for mathematics, died on 2 October, reported the American Foundation for the Blind in New York. He was 94. For his work on the Nemeth Code of Braille Mathematics and a lifetime of research on and development of other Braille codes, Nemeth received the Louis Braille Award from the International Braille Research Center in Baltimore, Maryland, in 2006. He was a long-time mathematics professor at the University of Detroit Mercy in Michigan.

UNESCO head The United Nations Educational, Scientific and Cultural Organization (UNESCO) on 4 October elected Irina Bokova for a second term as director-general. The nomination of Bokova, formerly Bulgaria’s ambassador to France, is expected to be approved by UNESCO’s general conference in November. Bokova has seen UNESCO through tough financial times since the withdrawal in 2011 of US funding — then 22% of the agency’s budget — following the organization’s decision to admit Palestine as a member (see Nature 479, 159; 2011).

Farming forecasts Agriculture giant Monsanto announced on 2 October that it has bought a crop-insurance company for about US$930 million. The Climate Corporation, based in San Francisco, California, crunches data from remote-sensing operations, including 2.5 million local weather-monitoring stations around the United States, to assess the risk to farmers from extreme weather events. Its big-data expertise is expected to help Monsanto, which is based in St Louis, Missouri, to improve predictions of how climate change will affect genetically modified crops.

Genetics patent Genetics firm 23andMe announced on 1 October that it had been awarded a US patent for a method to use parental DNA to predict a baby’s traits, including eye colour and disease risk. The patent application, filed more than five years ago, also covers use of the technique to screen sperm and ova for in vitrofertilization. Bioethicists expressed concern that the patented method could be used to produce ‘designer babies’, but the company, which is based in Mountain View, California, says that it does not intend to pursue that application of its technology. See go.nature.com/ruvkrh for more.

Merck staff cuts Merck, a pharmaceutical powerhouse headquartered in Whitehouse Station, New Jersey, announced on 1 October that it aims to save US$2.5 billion by the end of 2015 by laying off 20% of its employees. About half of the spending cuts will be in research and development. Merck, like many pharmaceutical firms making such moves, says that it plans to bolster alliances with outside companies. 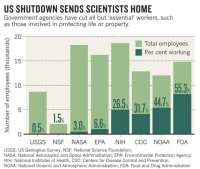 US government scientists have been hobbled by the government shutdown that began on 1 October, when lawmakers failed to agree on a spending plan for 2014. Science agencies sent most researchers home last week (see chart), and suspended their use of government telephone and e-mail services. Federal scientists were also unable to travel to conferences they had previously planned to attend. Select research operations are being maintained by a minimal set of employees (see Nature 502, 13–14; 2013).

12–17 October
Highlights at the annual meeting of the American Society for Reproductive Medicine in Boston, Massachusetts, include research on male contraception, the genetics of the uterine condition endometriosis and developments in egg-freezing.
go.nature.com/vtpab1