Probe head resigns The head of a Japanese committee investigating misconduct in two stem-cell research papers resigned from the panel on 25 April. Shunsuke Ishii, a molecular biologist at the RIKEN Molecular Genetics Laboratory in Saitama, Japan, stepped down over anonymous allegations that at least one of his own papers contains problematic data. He says that he has acted out of concern that the incident could complicate the investigation. Ishii was leading a committee investigating research led by Haruko Obokata of the RIKEN Center for Developmental Biology in Kobe, which was published in Nature. See go.nature.com/t3i8md for more.

Middle East virus As of 23 April, 345 people are reported to be infected with Middle East respiratory syndrome coronavirus, of whom 107 have died, according to the European Centre for Disease Prevention and Control in Stockholm. Most cases have occurred in Saudi Arabia, leading to the sacking last week of the country’s health minister Abdullah al-Rabeeah. The virus, which was first identified in 2012, predominantly infects animals, but can spread to and between humans.

Stem-cell fraud An Italian public prosecutor has criticized Davide Vannoni, president of the Stamina Foundation in Turin, Italy, for treating seriously ill patients with unproven stem-cell treatments. In a report published on 23 April, prosecutor Raffaele Guariniello concluded that Vannoni and 19 others, including physicians, civil servants and hospital directors, fraudulently obtained money — in some cases, tens of thousands of euros per patient — for the unproven treatments. A judge must now decide if the case should go to trial.

Dengue vaccine An experimental vaccine gives children partial protection against dengue virus, drug manufacturer Sanofi Pasteur of Lyon, France, announced on 28 April. A large trial enrolled more than 10,000 children in southeast Asia; those who received the vaccine were 56% less likely to develop dengue than those given a placebo. More details, as well as results from a separate large-scale trial of the vaccine, are expected later this year. Dengue virus infects an estimated 100 million people worldwide each year, causing flu-like symptoms in most and a potentially deadly haemorrhagic fever in a small minority. No vaccine is approved to prevent infection. 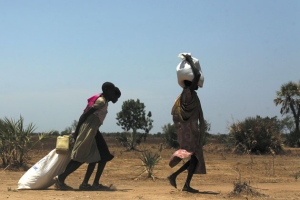 Famine looms in South Sudan Resumed fighting in South Sudan has made it impossible for many farmers to get hold of seed and tools, disrupting the main planting season and further exacerbating a food crisis. It also means that suitable land is scarce. Aid agencies said in a report published on 22 April that the food crisis is already causing worrying levels of malnutrition. United Nations secretary-general Ban Ki-moon has called for “immediate action” to avert a famine that could affect up to a million people. The last famine in Africa hit Somalia in 2011 and killed around 260,000 people.

British ice-breaker The United Kingdom will build a £200-million (US$336-million) polar ice-breaking ship by 2019, the government announced on 25 April. The British Antarctic Survey research vessel will be bigger and better-equipped than the nation’s existing polar ships, which are scheduled to be decommissioned at the end of the decade. The government also launched a consultation into long-term UK plans for research-infrastructure spending; it intends to publish a spending road map by the end of the year. See go.nature.com/2ei5pl for more.

Waste-plant report A nuclear-waste dump near Carlsbad, New Mexico, which suffered a radioactive leak in February, has been criticized for lax safety and dilapidated equipment. In a report released on 24 April, the US Department of Energy also said that the Waste Isolation Pilot Plant’s response to the accident was slow and inadequate. The 665-metre deep plant is supposed to store casks of nuclear waste for 10,000 years. But after just 15 years of operation, at least one cask ruptured and low levels of radioactivity leaked to the surface. 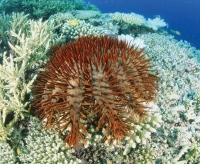 Starfish culled Over the past two years, the Australian government has overseen a cull of some 250,000 crown-of-thorns starfish (Acanthaster planci; pictured), environment minister Greg Hunt announced on 22 April. The initiative used an efficient single-injection method to destroy the creatures, which pose one of the biggest threats to the Great Barrier Reef. The injection causes an allergic reaction that results in the starfish breaking apart and dying within 24 hours. It has produced a fourfold increase in deaths over previous methods, which used multiple injections. The cull is part of Australia’s Reef 2050 Plan for the sustainable management of the reef between 2015 and 2050.

E-cigarette rules The US Food and Drug Administration (FDA) said on 24 April that it intends to expand its regulation of tobacco products to include cigars, hookah and pipe tobacco and electronic cigarettes. If the proposed rules go into force, these products would need to be reviewed by the FDA before being marketed, and they would not be allowed to be sold to people under the age of 18. The FDA will collect public comments on the proposal for 75 days, after which it may make a final ruling. See go.nature.com/lpwaw4 for more.

Drug-sale record Pharmaceutical company Gilead Sciences in Foster City, California, announced on 22 April record-breaking sales of its latest hepatitis C drug. Sovaldi (sofosbuvir) was launched last December and has since generated US$2.3 billion for the firm. The therapy has set a new record for drug sales; the previous record was held by another hepatitis C drug, developed by Vertex Pharmaceuticals of Boston, Massachusetts, that earned just over $1.5 billion in its first year on the market. Sovaldi is among the first treatments to fight the hepatitis C virus without requiring the use of interferon, a drug that causes unpleasant side effects.

Pharma swap Two major pharmaceutical companies announced that they are overhauling their businesses on 22 April. GlaxoSmithKline, based in London, has sold its cancer-drug business to Swiss pharmaceutical giant Novartis, based in Basel, for up to US$16 billion, depending on the results of a clinical trial. Novartis, meanwhile, unloaded its vaccine programme, excluding flu vaccines, to GlaxoSmithKline for as much as $7 billion plus royalties. The two companies will combine their consumer-health programmes to create a new business.

TB drug trial The first regimen designed to treat both drug-sensitive and resistant strains of tuberculosis will be tested in a phase III clinical trial. TB Alliance, a non-profit drug-development organization based in New York, said on 23 April that it hopes to launch the trial in four continents by the end of the year. The Shortening Treatments by Advancing Novel Drugs (STAND) trial will test a combination of three drugs called PaMZ (PA-824, moxifloxacin and pyrazinamide) that should shorten the time it takes to treat the disease from up to 24 months to just 6 months.

CRISPR claims A biopharmaceutical company has raised US$25 million to develop a business focused on the acclaimed gene-editing technology CRISPR–Cas9. CRISPR Therapeutics of Basel, Switzerland, announced on 24 April that it had won funding from Versant Ventures, a venture-capital firm in Menlo Park, California. The development follows last week’s announcement by the Broad Institute in Cambridge, Massachusetts, that it had patented an engineered CRISPR system (see Nature 508, 436–437; 2014). CRISPR Therapeutics’ claim on the technology’s intellectual property could conflict with that of the Broad Institute. 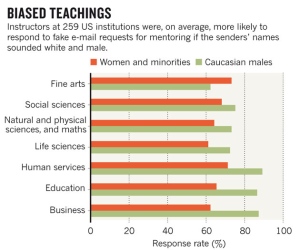 Women and people from ethnic minorities face well-documented hurdles in academia, including overt discrimination — and the bias extends to getting onto doctoral programmes. A 23 April study reports on sending e-mails to 6,548 professors at US institutions, in which (made-up) students requested a meeting to discuss research opportunities. It found that white men were more likely than women or ethnic minorities to receive a reply, in all but one discipline. See go.nature.com/1wjecs for more.

3–7 May
The American Psychiatric Association meets in New York. Discussions will cover use of complementary and alternative medicine in psychiatry; treatment for military patients; and psychosomatic medicine.
go.nature.com/49cwbn

17–20 May
The American Society for Microbiology meets in Boston, Massachusetts. Topics to be discussed include microbial responses to climate change; microbes involved in metabolism; and the origins of zoonotic pathogens.
go.nature.com/2rpw4w