Solar sensor launch A US satellite designed to measure the Sun’s energy output launched on 19 November from NASA’s Wallops Flight Facility on Wallops Island, Virginia. Data collected by the Total Solar Irradiance Calibration Transfer Experiment (TCTE) will help researchers to understand the Sun’s impact on Earth’s climate. The TCTE, funded by the US National Oceanic and Atmospheric Administration, is intended to replace the ageing Solar Radiation and Climate Experiment, which has been in orbit for more than ten years — twice its intended lifespan (see Nature 469, 457–458; 2011).

Swarm takes flight The European Space Agency has launched a trio of satellites designed to survey Earth’s magnetic field. The €220-million (US$296-million) Swarm mission lifted off on 22 November from the Plesetsk Cosmodrome in northern Russia. The mission, slated to last for four years, will measure temporal and spatial variations in the planet’s magnetic field in unprecedented detail. See go.nature.com/zi2fkk and Nature http://doi.org/p7p (2013) for more. 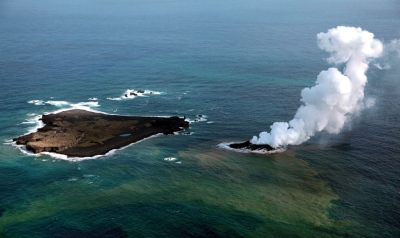 Eruption raises Japanese island Lava from an underwater volcano breached the surface of the Pacific Ocean last week, forming an island (pictured, right) some 1,000 kilometres south of Tokyo. The islet is about 200 metres in diameter and lies off the coast of Nishinoshima, an uninhabited island in the Ogasawara chain, or Bonin Islands. They and the rest of the Japanese archipelago form part of the seismically active ‘Ring of Fire’. In the past, other small islands have appeared near Japan and then eroded; officials are waiting to see if the new land mass persists before naming it. In September, an earthquake in Pakistan created an island off the country’s Gwadar coast, measuring about 50 metres by 20 metres (see Nature 502, 10–11; 2013).

UN climate talks International climate negotiators signed a landmark agreement on forest conservation at the United Nations climate summit in Warsaw on 23 November. The forest framework will enable carbon payments to countries that can document a reduction in deforestation. Negotiators also established a ‘loss and damage’ mechanism that will help poor countries to pay for the impacts of global warming. Progress on a new climate treaty scheduled for signing in Paris in 2015 was minimal, although countries agreed to submit commitments by early that year. See go.nature.com/pfswg2 for more.

Stem-cell laws Japan passed two regenerative-medicine laws on 20 November. A law intended to hasten approval of stem-cell treatments rules that candidate therapies no longer need to pass rigorous phase III clinical trials to prove efficacy — a move that critics say could flood the market with ineffective treatments (see Nature Med. 19, 510; 2013). Another law requires physicians to report the clinical use of unapproved stem-cell therapies to the Japanese health ministry. The new regulations will be implemented within a year.

Research waste Valuable, large-scale scientific instruments are standing idle in the United Kingdom because of poor financial planning, according to a parliamentary report released on 21 November. The House of Lords Science and Technology Committee cited a “damaging disconnect” between the funding provided to build new research facilities, and provision of the resources needed to operate them. For example, the government spent nearly £40 million (US$65 million) on a high-performance-computing centre, without budgeting for the electricity required to run the computers. See go.nature.com/6bw4bh for more.

Iran nuclear deal Iran agreed on 24 November in Geneva, Switzerland, to curtail its nuclear programme temporarily in exchange for partial relief from international sanctions. In a historic pact with the United States, the United Kingdom, Germany, France, Russia and China, the country has committed for six months to keep its uranium enrichment to below 5% purity (well short of the threshold for weapons-making), to neutralize stockpiles of more highly enriched uranium, and to allow frequent inspections by the Vienna-based International Atomic Energy Agency.

Horizon 2020 The European Parliament on 21 November formally approved Europe’s Horizon 2020 programme — a roughly €80-billion (US$108-billion) scheme to fund research and innovation. The parliament had initially hoped to budget €100 billion for the initiative, but its proposal was rejected in February by the heads of European Union (EU) member states. Horizon 2020, which runs from 2014 to 2020, introduces simplified funding rules to reduce red tape in EU-funded research (see Nature http://doi.org/p7n; 2013). 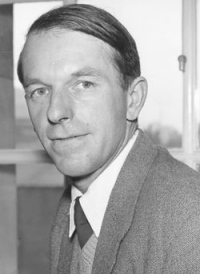 Nobel laureate dies Two-time Nobel prizewinner Frederick Sanger (pictured) died on 19 November, aged 95. Sanger won the 1958 Nobel Prize in Chemistry for developing a method that let him determine the complete amino-acid sequence of insulin — a method that has since been widely applied to other proteins. In 1980, he won the chemistry prize again, for discovering a technique for sequencing DNA. An adapted version of Sanger sequencing was later used to decode the human genome for the first time. See go.nature.com/lfc7yt for more.

Philanthropist dies Philanthropist and science advocate Fred Kavli died on 21 November, aged 86. He established the Kavli Foundation in Oxnard, California, in 2000 to support research and promote public understanding of science. The foundation has established research institutes internationally, and awards the biennial Kavli prizes — three US$1-million awards in the areas of astrophysics, nanoscience and neuroscience. The Kavli Foundation also had a central role in jump-starting the US BRAIN Initiative (see Nature 503, 26–28; 2013).

Science ship boost A key research vessel for international ocean drilling is getting a new lease of life. The US National Science Foundation (NSF) received authorization on 21 November to provide the JOIDES Resolution with as much as US$250 million in funding over the next five years — an amount to be supplemented with some $87.5 million from international partners. Amid tightening budgets, the NSF had previously considered slashing money for the vessel (see Nature 501, 469–470; 2013). Final funding levels must still be decided by Congress. See go.nature.com/5sbcqd for more.

Mentoring prize This year’s Nature Awards for Mentoring in Science have been given to three scientists in Italy: neurobiologist Michela Matteoli of the University of Milan, physicist Giorgio Parisi of the Sapienza University of Rome, and chemist Vincenzo Balzani of the University of Bologna. Italy’s President Giorgio Napolitano presented the prizes on 25 November at the Quirinal Palace in Rome. Each year, the awards honour outstanding scientific mentors in a different country or region. See pages 438 and 559 for more.

DNA diagnosis The US Food and Drug Administration has approved the first devices that use next-generation DNA-sequencing for diagnosis. The decision, made on 19 November, includes three kits to be used with the MiSeqDx sequencer made by Illumina in San Diego, California. Two of them pinpoint genetic mutations linked to cystic fibrosis, and the third would allow clinical labs to develop their own tests for other disorders. See go.nature.com/auzrmg for more.

Arrested testing Personal-genetics firm 23andMe in Mountain View, California, must stop marketing its genetic testing service, says the US Food and Drug Administration (FDA). In a warning letter on 22 November, the agency said that the saliva-testing kit has yet to be approved or cleared as a medical device. The company filed for FDA clearance of several tests for various diseases in 2012, but the agency said that 23andMe has not since provided the data to validate those tests, nor others covered by its kit, and has not responded to communications since May. See go.nature.com/uozdie for more. 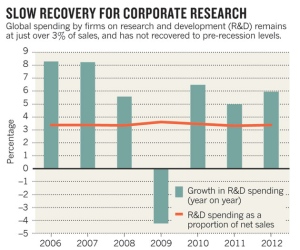 The 2,000 companies that spend the most on research and development increased their investment by 6.2% last year, according to the European Commission’s 2013 Industrial R&D Investment Scoreboard. This is broadly in line with changes in net sales. German car-maker Volkswagen, headquartered in Wolfsburg, was the world’s biggest research investor with €9.5 billion (US$12.9 billion) spent in 2012; electronics firm Samsung in Seoul ranked second with €8.3 billion.

3–5 December
Experts convened by the World Health Organization will select a shortlist from 22 proposals for using new ways to pay for health technologies in poor countries; winners chosen next year will run as demonstration projects.
go.nature.com/4uovpx