Big bursts Astronomers have spotted a new, long-lived and powerful type of γ-ray burst, a cosmic explosion that spews out high-energy particles. The bursts can last for up to several hours at a time, rather than the seconds or minutes that scientists expected. They might emanate from the death throes of supergiant stars, astronomers proposed at a meeting in Nashville, Tennessee, on 16 April.

US energy secretary In a vote on 18 April, the US Senate energy committee approved President Barack Obama’s choice for energy secretary: Ernest Moniz, a physicist at the Massachusetts Institute of Technology in Cambridge. Moniz, who served as an undersecretary for energy under former president Bill Clinton, has backed the use of a mixture of conventional and renewable energy sources to meet demand (see Nature 494, 409–410; 2013). The full Senate is expected to confirm the nomination.

Nobel laureate dies François Jacob, a Nobel-prizewinning French biologist, died on 19 April aged 92. With Jacques Monod and André Lwoff, Jacob shared the 1965 Nobel Prize in Physiology or Medicine for his work on gene expression and how it is controlled. While working at the Pasteur Institute in Paris, he identified regulatory proteins that bind to DNA, preventing its transcription into RNA and thus dampening the expression of cellular enzymes. Jacob explained how feedback from the cell’s environment changes the activity of the regulatory proteins. 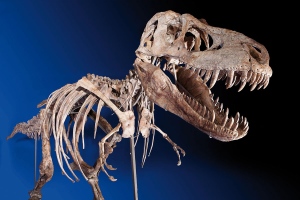 Return of the dinosaur Mongolian researchers have finally got their hands on the Tarbosaurus bataar fossil (pictured) that was illegally smuggled out of Mongolia and came to auction in the United States last year. On 16 April, the team in New York began weighing and measuring the bones of the T. bataar specimen in preparation for customs registration and shipment back to Mongolia, which is expected shortly after it officially becomes Mongolian property on 6 May. The legal status of the fossil had been in limbo since Mongolia disputed its sale for more than US$1 million at a New York auction house last May. The 7.3-metre-long specimen is one of the most complete tyrannosaurid specimens ever found.

Toxic letters A Mississippi man suspected of sending letters laced with the deadly toxin ricin to US President Barack Obama and Republican senator Roger Wicker (Mississippi) was charged with threatening injury and death by the Federal Bureau of Investigation on 18 April. The letters were intercepted the previous day at postal screening facilities, and lab tests confirmed the presence of ricin, which is 1,000 times more toxic than cyanide. The toxin is most lethal when inhaled or injected; there is no antidote, but symptoms can be treated. The suspect, Paul Kevin Curtis, of Corinth, faces up to 15 years in prison if convicted. See go.nature.com/xgnin4 for more.

Rocket launch The Antares rocket built by Orbital Sciences of Dulles, Virginia, successfully completed its maiden test flight on 21 April. The rocket is the first vehicle to take off from NASA’s new launch pad at the Wallops Flight Facility in Virginia. The flight puts NASA one step closer to having two US cargo carriers available to resupply the International Space Station. “It looks like it performed flawlessly throughout the day,” said NASA launch commentator Kyle Herring. See go.nature.com/b6oeoz for more.

Lawsuit settlement Cancer researcher Philippe Bois has settled a lawsuit against the US Department of Health and Human Services (DHHS) over scientific misconduct, according to an announcement on 18 April. A former postdoctoral researcher at St Jude Children’s Research Hospital in Memphis, Tennessee, Bois last year successfully challenged a DHHS judge’s denial of his request for a defence hearing. But the case was settled with Bois denying that he falsified published results while agreeing not to appeal the Office of Research Integrity’s findings of research misconduct any further.

Primate carriers Vietnam Airlines said on 19 April that it will no longer transport primates used in research experiments, effective from 1 May. The airline has been under pressure from animal-rights groups. It was one of the last major carriers to transport primates for research: only Air France and Philippine Airlines say that they still do so. Air Canada, United Airlines and China Eastern announced that they would stop shipments in December, January and March respectively.

Animal activism Animal-rights activists occupied an animal facility at the University of Milan in Italy on 20 April. They demanded that all its 800 animals (mostly genetically modified mice) be transferred into their care. After 12 hours of negotiations, the activists agreed to leave with fewer than 100 animals, but mixed up some of the remaining animals and cage labels to disrupt experiments. Researchers say they have lost years of work. See go.nature.com/yxeciw for more. 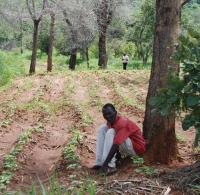 African agriculture African farmers must use sustainable and environmentally friendly technologies to reverse rising hunger levels across the continent, according to an 18 April report from the Montpellier Panel, a group of agriculture and development experts based in London. One recommended practice is pictured in Malawi: planting crops under ‘fertilizer’ trees, such as Faidherbia albida, which provide nutrients to the soil below. It says that sustainable intensification of African agriculture will produce higher yields and more nutritious foods while reducing reliance on fertilizers and pesticides, thus lowering greenhouse-gas emissions.

Energy spending Investment in renewable energy technologies still falls short of the level needed to clean up the global energy system and stabilize the climate, says a report from the International Energy Agency in Paris. In 2012, global markets in solar photovoltaic technology and wind energy grew by 42% and 19%, respectively, says the 17 April report. But the continued growth in energy produced by coal-fired power stations is offsetting progress, it says.

Venture declines US venture-capital investments shrank 12% to US$5.9 billion in the first quarter of 2013, with the life sciences and clean technology particularly affected, according to a report by accountancy firm PricewaterhouseCoopers in London and the National Venture Capital Association in Arlington, Virginia. The report, released on 19 April, found that investment in biotechnology and medical devices fell by 28% and investment in clean technology declined by 35% relative to the previous quarter. First-time deals for start-ups in the life sciences dropped by 52% to $98 million — the lowest level since 1996.

Salmon farming The Haida Salmon Restoration Corporation (HSRC), a salmon breeding and biotechnology company on the Queen Charlotte Islands in Canada, is disputing the legality of a search of its offices by the government agency Environment Canada last month. The agency said that the corporation had dumped iron compounds off the west coast of Canada illegally. The HSRC says that the iron was intended to fertilize phytoplankton, boosting ocean productivity and salmon populations. On 17 April, the corporation filed a court brief arguing that Canadian anti-dumping regulations do not apply to “ocean pasture replenishment and restoration”. 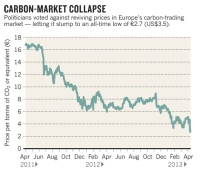 Prices for allowances to emit a tonne of carbon dioxide on Europe’s carbon-trading market are likely to remain low until 2020, after the European Parliament rejected a plan on 16 April to withhold the release of some emissions allowances, which have flooded the market since the recession. This means that the market is unlikely to spur investment in low-carbon energy, one of the scheme’s key goals when it was launched in 2005. See go.nature.com/czdx9k for more.

US$674 billion
The amount spent last year finding and developing new fossil-fuel reserves, according to Carbon Tracker, even though burning them would cause a catastrophic rise in global temperatures.

27–30 April
Flu pandemics, the resurgence of measles and antimicrobial resistance are all discussed at the European Society of Clinical Microbiology and Infectious Diseases meeting in Berlin.
go.nature.com/jyfhwf