LADEE crashes NASA’s Moon-dust probe shattered into clouds of dust when it hit the far side of the Moon, as planned, in a mission-ending impact on 18 April. The Lunar Atmosphere and Dust Environment Explorer (LADEE) finished its duties in March. Mission controllers directed the crash to protect historic lunar locations such as the Apollo landing sites from probe debris. During its lifetime, LADEE made the best measurements yet of lunar dust, generated as tiny meteorites bombard the Moon’s surface. See go.nature.com/mwqoln for more.

Weapons update Syria has removed or destroyed around 80% of its chemical-weapons materials, a joint mission of the Organisation for the Prohibition of Chemical Weapons and the United Nations announced on 19 April. The remaining materials should be removed over the next few days, the mission says; all materials must be destroyed by 30 June. The process began in January under an agreement brokered by Russia and the United States. 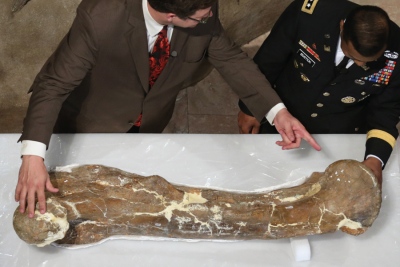 T. rex comes to Washington A near-complete 66-million-year-old Tyrannosaurus rex skeleton (right femur pictured) arrived at the US National Museum of Natural History in Washington DC on 15 April. It is on loan for 50 years from the US Army Corps of Engineers. The fossil is one of the largest and most complete T. rex specimens ever discovered, with up to 85% of the skeleton recovered after it was found on federal land in 1988. It will become the centrepiece of the museum’s new 2,900-square-metre dinosaur and fossil hall, which is scheduled to open in 2019 and will house examples from the museum’s collection of 46 million fossils. The hall will be named after philanthropist David Koch, who donated US$35 million to the project.

NIH grant recycling The US National Institutes of Health is to allow researchers to base new grant applications on ideas that have previously been rejected for funding. The agency announced the policy on 17 April (go.nature.com/43cibf). It modifies a 2009 rule that any completely new grant application must be substantially scientifically different from one that has been rejected. The change is in response to complaints that the 2009 policy penalized young researchers whose work cannot easily change direction to generate completely new proposals.

Emissions down US emissions of six major heat-trapping gases decreased by 3.4% between 2011 and 2012, to the equivalent of 6,526 million tonnes of carbon dioxide, the US Environmental Protection Agency said on 15 April. Energy consumption dropped in every sector of the US economy, the agency said, because more energy was generated from natural gas than from coal, among other factors. Emissions from transport also fell as fuel efficiency increased and demand for new vehicles declined.

Environment boost Some 30 nations pledged US$4.43 billion on 16 April to help developing countries to protect the environment from degradation. The funding will be distributed over the next four years by the Global Environment Facility — an international partnership of governments, civil-society organizations and companies that supports sustainable development and environmental treaties such as the Convention on Biological Diversity. The funding will go towards projects in more than 140 countries, aimed at tackling threats such as species extinction, toxic chemicals and deforestation.

Cash for innovation The European Parliament voted on 15 April in favour of a €22-billion (US$30-billion) programme to fund research and innovation partnerships between academia and industry. The Innovation Investment Package is funded by the European Union, industry and member states. Much of it will support six public–private partnerships, revamping the Joint Technology Initiatives of Europe’s previous multi-year research-funding programme. The package will provide competitive grants in innovative medicines, aeronautics, bio-based industries, fuel cells and hydrogen, and electronics components. Member states are expected to approve it in time for a proposed July launch.

Pollution survey Just under one-sixth of China’s land is polluted, according to the first nationwide soil survey, released on 17 April by the Ministry of Environmental Protection and the Ministry of Land and Resources. Much of the pollution comes from cadmium, nickel and arsenic released by industry and agriculture, the analysis found. The survey ran from April 2005 to December 2013 and covered 6.3 million square kilometres — two-thirds of the nation’s land area.

GM-labels law Vermont looks set to become the first US state to enact a law requiring the labelling of foods containing genetically modified (GM) ingredients. On 16 April, the state’s senate passed a bill in favour of labelling. The house of representatives is expected to agree to amendments to the bill, which has already passed through the house and senate once. Vermont’s governor supports GM labels. Connecticut and Maine passed similar laws last year, but both contain clauses that stop them from coming into effect until neighbouring states follow suit. 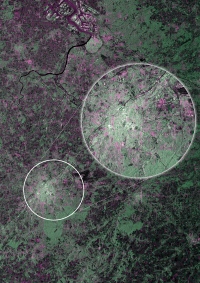 Sentinel shots The European Space Agency published the first images from its Sentinel-1A satellite on 15 April. This image shows the city of Brussels and its surroundings. Green correlates to vegetation; pink to urban areas; white to high-density urban areas; and black to waterways and low-reflective areas such as airport runways. The image was captured by the satellite on 12 April, nine days after it launched.

Egyptian satellite Egypt’s second remote-sensing satellite launched on 16 April on a mission to collect agricultural, geological and environmental data from northern Africa. The Russian-built EgyptSat-2 sailed into space aboard a Soyuz launch vehicle from the Baikonur Cosmodrome in Kazakhstan. The probe replaces EgyptSat-1, which lasted for three years after its 2007 launch. Data from the second satellite will be handled by the Egyptian National Authority for Remote Sensing and Space Sciences near Cairo.

SpaceX delivery SpaceX, the private spaceflight company in Hawthorne, California, made its third successful cargo delivery to the International Space Station on 20 April, as part of a US$1.6-billion contract with NASA to make a dozen drops to the space station by 2016. The flight was delayed from March because of technical difficulties. It carried science experiments and supplies including high-definition cameras for viewing Earth, and equipment to test why the immune system becomes suppressed in microgravity.

Gene-cutter patent An acclaimed method for editing DNA sequences has won its first patent. On 15 April, the Broad Institute in Cambridge, Massachusetts, announced that it had patented an engineered CRISPR–Cas9 system. The ‘clustered regularly interspaced short palindromic repeats’ process uses an engineered bacterial enzyme to target genes, making precise cuts in their DNA sequence and thereby enabling them to be modified. The system was devised by molecular biologist Feng Zhang at the Broad. Last November, Zhang co-founded a company, Editas Medicine in Cambridge, to develop ways of using the CRISPR technology for therapies (see go.nature.com/c8jopb).

RNAi drugs battle The withdrawal of the pharmaceutical firm Novartis from RNA interference (RNAi)-based drug development does not spell the end for the field, a biotechnology executive says. RNAi-based drugs use snippets of RNA to shut down the production of disease-causing proteins. In an interview with Natureon 15 April, John Maraganore, chief executive of RNAi specialists Alnylam in Cambridge, Massachusetts, said that the announcement on 14 April by Novartis of Basel, Switzerland, indicated that “large companies don’t do a good job with the technology”. The field is actually thriving, he says. See page 443 for more. 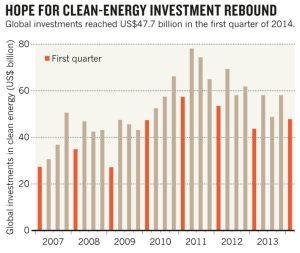 Clean-energy analysts hope that a promising first quarter to 2014 foreshadow a rebound for dipping global investments. Figures released by Bloomberg New Energy Finance showed investment rising 10% on the same period last year, driven mainly by small-scale solar projects. There was a notable geographic shift too, with two of the largest deals occurring in Indonesia (US$1.6 billion for the Sarulla geothermal project), and Kenya ($860 million for the Lake Turkana wind project).

29 April
The first solar eclipse of the year takes place. A bright ring of sunlight will surround the dark Moon in this annular eclipse, which will be best viewed from Antarctica.
go.nature.com/q3dvlq

30 April
The World Health Organization publishes a report on global surveillance of antimicrobial resistance. It will present data on antibiotic resistance in nine bacteria responsible for common maladies such as diarrhoea and bloodstream infections.