Global risks Extreme weather has been rated the second most likely serious danger to nations and their economies by the World Economic Forum’s 2015 Global Risks report. The non-profit organization, which is based in Geneva, Switzerland, and is behind the annual meetings of international leaders in the Swiss village of Davos, based the report on the opinions of around 900 experts. Interstate conflict was rated the most likely global risk, with extreme weather just behind. Natural catastrophes came in at number six, with failure of climate-change adaptation at seven. The top two risks in terms of impact rather than likelihood were water crises and the spread of infectious diseases.

Anthropocene start The first atomic bomb test, on 16 July 1945 in New Mexico, could serve as the official start date of the Anthropocene epoch — a proposed unit of geological time that marks human influence on the planet. In a paper published on 12 January, 26 members of a stratigraphic working group argue that radioactive elements spread by this and subsequent nuclear tests provide a sensible transition point from the current Holocene epoch (J. Zalasiewicz et al. Quat. Int. http://doi.org/zjf; 2015). The working group plans to come up with a final recommendation on whether and how to define the Anthropocene in 2016. See go.nature.com/serlrs for more.

Millions die early Alcohol, tobacco and unhealthy diets are shortening the lives of 16 million people with non-communicable diseases every year, the World Health Organization (WHO) has warned. In 2012, 38 million deaths were due to non-communicable diseases, according to a WHO report released on 19 January, and 16 million of these were premature. Margaret Chan, the WHO’s director-general, called for increased government action to tackle the problem. 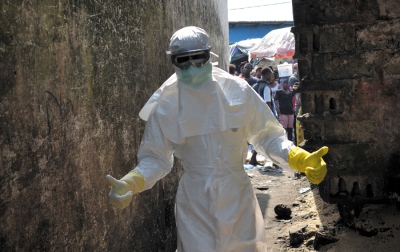 Progress in Ebola fight Mali’s government declared the Ebola epidemic over in its country on 18 January. The ministry of health said that there had been no confirmed cases of the virus in Mali since 6 December. Efforts continue to stop the spread of the disease in the nations worst affected: Liberia (pictured), Guinea and Sierra Leone. In Liberia, the Ministry of Health and Social Welfare reported on 19 January that 12 of 15 counties in the country had had no new cases in the preceding week.

Lost probe found A British-built Mars probe that failed to phone home after an attempted landing in December 2003 has been spotted on the red planet. Images from NASA’s Mars Reconnaissance Orbiter suggest that the Beagle 2 craft landed safely but failed to deploy crucial equipment. For more, see go.nature.com/wxhzki and page 412.

Obesity approval The US Food and Drug Administration on 14 January approved the first medical device designed to treat obesity by targeting nerve signalling. The Maestro implant, developed by EnteroMedics of St Paul, Minnesota, stimulates the vagus nerve between the oesophagus and stomach, blocking hunger signals to the brain (see Nature 511, 18; 2014). In clinical trials, the device caused obese people to lose 8.5% more weight than people implanted with a dummy device.

Deepwater spill size Oil company BP is responsible for discharging 3.19 million barrels of oil into the Gulf of Mexico during the 2010 Deepwater Horizon spill, a US federal court ruled on 15 January. The court says that the firm, headquartered in London, spilled around 4 million barrels, with 0.81 million later cleaned up — a larger net amount than BP’s own estimate of the spillage, but less than that estimated by the US government. This ruling caps BP’s potential fine for the disaster at US$13.7 billion. Meanwhile, on 13 January, the US Environmental Protection Agency proposed revised rules for using chemical dispersants on oil spills, requiring improved studies of the chemicals’ safety and efficacy.

Nature merger The publisher of Nature is to merge with Berlin-based publisher Springer Science+Business Media, their parent companies announced on 15 January. London-based Macmillan Science and Education, which owns all the Nature-branded journals, will combine its publishing portfolio with Springer’s to create a firm with some 13,000 employees and a turnover of around €1.5 billion (US$1.7 billion), the companies said. The deal was agreed by Holtzbrinck Publishing Group of Stuttgart, Germany, which owns Macmillan, and the London-based private equity firm BC Partners, which in 2013 bought Springer in a deal worth around €3.1 billion. See go.nature.com/5rcn9i for more. 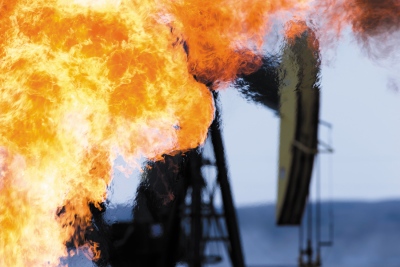 US methane rules US oil and gas companies will have to reduce methane emissions by 40–45% below 2012 levels by 2025 under new rules announced by US President Barack Obama on 14 January. Methane emissions from fossil-fuel extraction (pictured) and distribution contribute around 3% of total US greenhouse-gas emissions. The regulations build on a larger Obama-administration initiative to curb greenhouse-gas release that began last year and has already targeted car and power-plant emissions.

GM-crop deal The European Parliament has passed into law a political compromise that should allow more genetically modified (GM) crops to be cultivated in the European Union (EU). Under an agreement hashed out in December (see Nature http://doi.org/xmq; 2014), and passed on 13 January, crops will still be approved at the level of the EU, but member states will be able to ban their use locally. A deadlock between nations for and against genetic modification of crops has meant that hardly any GM crops are grown in the EU. Some researchers have welcomed the compromise, although anti-GM groups and the biotechnology industry have been critical.

Stimulus backlash Researchers have complained that a mooted billion-euro investment fund designed to stimulate economies in the European Union (EU) will be partly financed by money that has been stripped from research budgets. On 13 January, the EU confirmed that some of the stimulus funds could come from cuts to the Horizon 2020 research-funding programme. The European University Association in Brussels expressed “strong disappointment” at the news.

Clinical-trial data All results of a clinical trial should be released within 18 months of the study’s completion, according to recommendations in a report from the US Institute of Medicine released on 14 January. The report also recommends that pharmaceutical and device companies that sponsor trials release at least a summary of the results and adverse effects within a year. Medical researchers have been pushing for greater openness of trial data, but some companies worry that releasing data too early could compromise trade secrets.

Crafoord winners Two scientists who did pioneering work on genetic diversity and evolution in the 1960s and 1970s were awarded the 2015 Crafoord Prize, the Royal Swedish Academy of Sciences announced on 15 January. Richard Lewontin at Harvard University in Cambridge, Massachusetts, and Tomoko Ohta at the National Institute of Genetics in Mishima, Japan, will share the annual award, worth 6 million Swedish kronor (US$735,000). The Crafoord Prize was established to recognize work that is not usually covered by the Nobel prizes, and it rotates between astronomy, geosciences and biosciences.

Geology awardVolcanologist Stephen Sparks of the University of Bristol, UK, has won the US$250,000 Vetlesen Prize, one of the most prestigious in the Earth sciences. The award, announced on 20 January, recognizes his field studies and laboratory work, which helped to standardize and modernize volcanology. Sparks led the UK government’s scientific response to the volcanic eruption that began in 1995 on the Caribbean island of Montserrat. His work is now focused on studies of global volcanic risk. 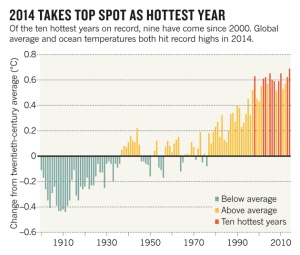 Last year was the hottest since records began in 1880, according to two separate analyses from researchers at NASA and at the US National Oceanic and Atmospheric Administration. Global surface temperatures for land and ocean were 0.69 °C above the average for the twentieth century. Average surface temperatures have increased by 0.8 °C since 1880. The record was reached in the absence of the El Niño ocean system, which often drives up temperatures (see go.nature.com/ujnoif).