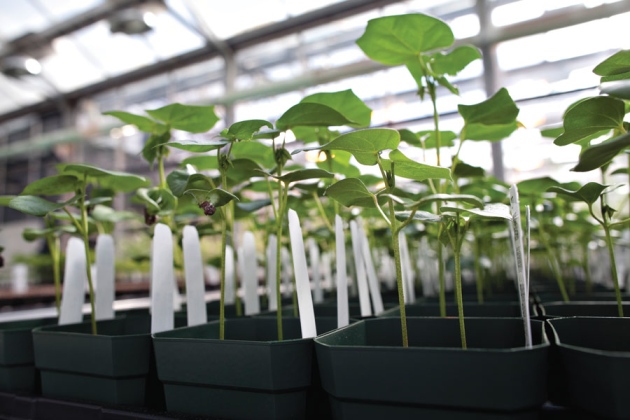 Monsanto could face a loss of revenue from its herbicide-resistant soya beans.

A technology called a ‘terminator’ was never going to curry much favour with the public. But even Monsanto, the agricultural biotechnology giant in St Louis, Missouri, was surprised by the furore that followed when it announced that it might acquire a method for engineering transgenic crops to produce sterile seed, which would force farmers to buy new seed for each planting. In 1999, Monsanto’s chief executive pledged not to commercialize terminator seeds.

The concept, if not the technology, is now gaining traction again. This week, the US Supreme Court hears arguments that pit Monsanto against 75-year-old Indiana soya-bean farmer Vernon Hugh Bowman, who used the progeny of Monsanto seeds to sow his land for eight seasons. The company says that by not buying seeds for each generation, Bowman violated its patents. If Bowman wins — and observers say that is not out of the question — the decision could make it harder for biotech firms to enforce patents on engineered organisms, from seeds to microbes, prompting them to revisit terminator-like technology.

“If I were at Monsanto and I learned that patents are not available to protect my soybeans, I would think of some kind of technological fix,” says Christopher Holman, an intellectual-property specialist at the University of Missouri-Kansas City School of Law. Indeed, some synthetic-biology companies, concerned about policing illegal, copycat proliferation of their technology, are already working on terminator-like safeguards.

Bowman was a regular customer for Monsanto’s herbicide-resistant soya beans for his main crop, but bypassed the company by purchasing seed for a late-season crop from a grain elevator known to contain Monsanto’s transgenic seed. In 2007, Monsanto sued him. As the case climbed through the court system, it grew from a simple contract violation to a challenge of the idea that companies can use patents to limit the offspring of naturally ‘self-replicating’ technologies. The lower courts sided with Monsanto, and many were surprised when the Supreme Court took up the appeal.

Even if the Supreme Court does not overturn the lower courts’ rulings outright, biotechnology firms are bracing themselves for clarifications of patents on self-replicating inventions. Without that protection, companies say, they have little recourse to prevent someone from buying seed — or a cell culture or a transgenic animal — and using it to generate thousands more to sell again at a fraction of the original price. “Once you have sold the first seed, you are done,” says Hans Sauer, deputy general counsel for intellectual property at the Biotechnology Industry Organization, a lobby group in Washington DC.

Early patents on ‘gene-use restriction technologies’ — later rebranded as ‘terminator’ technology by activists opposed to them — described a genetic modification that switched on production of a toxin that would kill off developing plant embryos. The result: a seed that could be harvested for food but would not produce offspring. The controversial proposal raised concerns that it would make farmers dependent on industry for their livelihood. 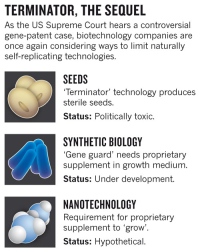 There are alternatives to making sterile seeds (see ‘Terminator, the sequel’). One tactic would be to switch off the transgene of interest in seeds, so that they could grow into new plants but would not pass on the benefits of the engineered trait. Another approach is to place the transgene under the control of a switch that must be activated by a proprietary chemical. That would give companies control over the engineered trait by forcing buyers to return each year to purchase the chemical.

That is the strategy of Ginkgo BioWorks, a four-year-old synthetic-biology company in Boston, Massachusetts, that develops ‘made-to-order microbes’ to churn out marketable chemicals. Founder Jason Kelly says that the company plans to charge customers on the basis of how much they use the microbes. For accurate billing and theft protection, Gingko needs to control that use, so it is developing what Kelly calls a ‘gene-guard’ technology: a genetic tweak that makes production of the desired chemical dependent on a proprietary additive, supplied by Ginkgo, in its fermentation medium. The approach could even be used in nanotechnology, by making engineered nanobots that are dependent on a proprietary raw material.

In a strange twist of fate, terminator technology has begun to look more appealing to environmentalists. Organic farmers want ways to keep genetically engineered crops from contaminating their fields, and food-safety groups are concerned about contamination of food crops with products from a new generation of crops engineered to produce chemicals or pharmaceuticals. By ensuring that genetically modified plants survive for only one planting, “that technology would have alleviated a lot of environmental concerns”, says Holman.

Approaches dependent on switching will take considerable research, however; companies reported technical challenges with the first generation of terminator techniques. Patents owned by Monsanto required the insertion of three different genes into the plant genome. Monsanto says it is currently not researching the techniques, and other companies are hoping that they will not have to. “Perhaps these technologies could provide new ways to protect investments,” says Brett Lund, former head of intellectual property for the biofuels group of Syngenta, an agri-giant headquartered in Basel, Switzerland. “But the easiest and best way is through our patent system.”

This story originally implied that Monsanto patented a method for engineering transgenic crops to produce sterile seed before 1999. Monsanto entered negotiations in 1998 to acquire the company that filed the patents, but did not complete the deal until 2007. Monsanto never commercialized such crops. The story has been amended to reflect this.