A chemical treatment that turns whole organs transparent offers a big boost to the field of ‘connectomics’ — the push to map the brain’s fiendishly complicated wiring. Scientists could use the technique to view large networks of neurons with unprecedented ease and accuracy. The technology also opens up new research avenues for old brains that were saved from patients and healthy donors.

“This is probably one of the most important advances for doing neuroanatomy in decades,” says Thomas Insel, director of the US National Institute of Mental Health in Bethesda, Maryland, which funded part of the work. Existing technology allows scientists to see neurons and their connections in microscopic detail — but only across tiny slivers of tissue. Researchers must reconstruct three-dimensional data from images of these thin slices. Aligning hundreds or even thousands of these snapshots to map long-range projections of nerve cells is laborious and error-prone, rendering fine-grain analysis of whole brains practically impossible.

The new method instead allows researchers to see directly into optically transparent whole brains or thick blocks of brain tissue. Called CLARITY, it was devised by Karl Deisseroth and his team at Stanford University in California. “You can get right down to the fine structure of the system while not losing the big picture,” says Deisseroth, who adds that his group is in the process of rendering an entire human brain transparent.

The technique, published online in Nature on 10 April, turns the brain transparent using the detergent SDS, which strips away lipids that normally block the passage of light  (K. Chung et al. Nature http://dx.doi.org/10.1038/nature12107; 2013). Other groups have tried to clarify brains in the past, but many lipid-extraction techniques dissolve proteins and thus make it harder to identify different types of neurons. Deisseroth’s group solved this problem by first infusing the brain with acryl­amide, which binds proteins, nucleic acids and other biomolecules. When the acrylamide is heated, it polymerizes and forms a tissue-wide mesh that secures the molecules. The resulting brain–hydrogel hybrid showed only 8% protein loss after lipid extraction, compared to 41% with existing methods.

Applying CLARITY to whole mouse brains, the researchers viewed fluorescently labelled neurons in areas ranging from outer layers of the cortex to deep structures such as the thalamus. They also traced individual nerve fibres through 0.5-millimetre-thick slabs of formalin-preserved autopsied human brain — orders of magnitude thicker than slices currently imaged. 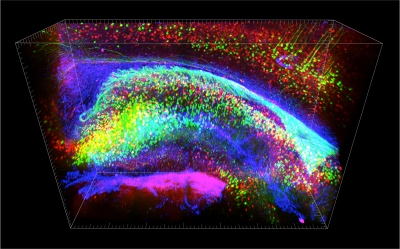 “The work is spectacular. The results are unlike anything else in the field,” says Van Wedeen, a neuroscientist at the Massachusetts General Hospital in Boston and a lead investigator on the US National Institutes of Health’s Human Connectome Project (HCP), which aims to chart the brain’s neuronal communication networks. The new technique, he says, could reveal important cellular details that would complement data on large-scale neuronal pathways that he and his colleagues are mapping in the HCP’s 1,200 healthy participants using magnetic resonance imaging.

Francine Benes, director of the Harvard Brain Tissue Resource Center at McLean Hospital in Belmont, Massachusetts, says that more tests are needed to assess whether the lipid-clearing treatment alters or damages the fundamental structure of brain tissue. But she and others predict that CLARITY will pave the way for studies on healthy brain wiring, and on brain disorders and ageing.

Researchers could, for example, compare circuitry in banked tissue from people with neurological diseases and from controls whose brains were healthy. Such studies in living people are impossible, because most neuron-tracing methods require genetic engineering or injection of dye in living animals. Scientists might also revisit the many specimens in repositories that have been difficult to analyse because human brains are so large.

The hydrogel–tissue hybrid formed by CLARITY — stiffer and more chemically stable than untreated tissue — might also turn delicate and rare disease specimens into re­usable resources, Deisseroth says. One could, in effect, create a library of brains that different researchers check out, study and then return.