With just a bit of swirling, fire ants quickly clump together to form a ball. Researchers hope the features of ants' formations will inspire robot designers.

To negotiate floods and cross streams, fire ants band together — literally — linking together to form rafts and bridges in a feat of social cooperation and biophysics. Now, engineers have made a close study1 of the ants' architectural technique, pointing the way towards new approaches for robot designers and materials scientists.

To understand the properties of the ant structures, David Hu, a mechanical engineer at the Georgia Institute of Technology in Atlanta, sought to observe not just the surface of the ant clumps but the structure and joints underneath.

First, Hu and his team collected ant colonies — shovelling them, dirt and all, into buckets. After separating out the ants from the dirt, they then put 100 or so ants into a cup and swirled, causing the ants to form into a ball (no water necessary -- they come together almost like dough). The researchers then froze the ball with liquid nitrogen so they could examine it in a micro-computed-tomography scanner to come up with a 3-D picture.

But the heat of the scanner melted the ball into a heap of dead ants. After months of experimenting with techniques to keep it together, lead author Paul Foster, now at the University of Michigan, found an unlikely source of inspiration in crack cocaine — specifically, in a method of vaporizing the drug to inhale it. “We did the same process — not with crack, but glue,” says Hu, adding that the authors decided against calling it the ‘crack-pipe method’ in their paper. The researchers heated the glue in an aluminium pot over a flame, with the frozen ant ball suspended on mesh above. The glue vapour rose and lightly coated the ants. 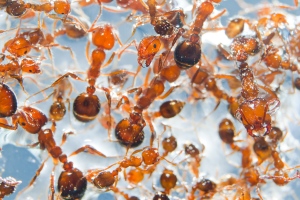 When threatened with floods and other stresses, ant colonies form light, buoyant structures.

Hu and his team found that the ants had grabbed hold of one another with adhesive pads on their legs, which they stretched out to create pockets of air. They also tended to orient themselves perpendicularly to one another, distributing their weight and creating a light, buoyant structure. The formation seems to take advantage of the ants’ different sizes, with smaller ants slotting neatly in between larger ones to add more connections. Each ant averaged 14 connections to fellow ants. The study is published today in the Journal of Experimental Biology1.

Radhika Nagpal, who creates biologically inspired robots at Harvard University in Cambridge, Massachusetts, says that Hu’s ants could make great models for modular robots. “There’s lots of interesting outcomes of this work,” she says. “Imagine robots that need to construct a barrier or patch a hole during a disaster response.”

Rather than building one perfect robot, she notes, designers are increasingly exploring building a “colony of simple robots that use their bodies and the connections between them to build new structures.” Most projects in this vein have used geometric robots with precise connections. But ants do not create a perfect lattice, suggesting a sloppier, more organic approach in which robot shapes are varied and irregular and connections between them are inexact, Nagpal says. Hu thinks that the properties of ant structures might not only inform the design of robot swarms, but also the design of ‘smart’ materials that assemble themselves in response to temperature, light or other variables.

Hu is working on getting larger ant structures — recognizably distinct as bridges, rafts and other forms — into a bigger scanner to begin detailing the properties of the different functional shapes. And once they are frozen and coated in glue, they will last forever, Hu says. “One day,” he jokes, “we will have a miniature museum of ant structures.”