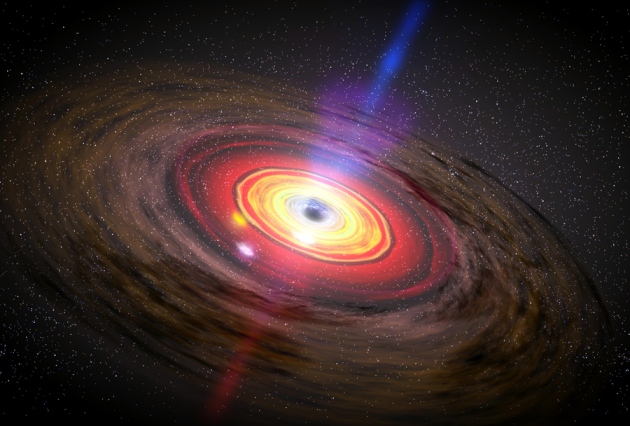 A study finds that black holes are unlikely to explain dark matter.

It has been called an elegant solution to a difficult problem. The notion that mysterious dark matter, which holds galaxies together, is made of primordial black holes that formed when dense regions of early Universe gravitationally collapsed was laid out in 1971 by physicist Stephen Hawking of the University of Cambridge, UK1. The idea has never been the mainstream explanation for dark matter — 85% of the Universe's matter that makes itself known only through its gravitational influence on observable objects — but it has lingered because it does not require the addition of particles to the standard model of particle physics.

Even when a 2013 study2 ruled out the possibility that primordial black holes in a certain size range had passed in front of stars observed by NASA’s Kepler space telescope, Hawking's hypothesis remained viable because the method used was not sensitive to holes with masses less than that of the Moon. That motivated astronomers to continue to sleuth through astronomical data for evidence of smaller black holes — until now.

In a paper posted to the arXiv preprint server on 13 January3, astrophysicists Paolo Pani of the University of Lisbon in Portugal and Avi Loeb of the Harvard‒Smithsonian Center for Astrophysics in Cambridge, Massachusetts, considered what would happen if small primordial black holes happened to pass through neutron stars, which can be observed from Earth. The researchers suggest that despite their small mass, the black holes would destroy the stars. That means that the presence of neutron stars can be used to place limits on the prevalence of small black holes that would have destroyed them if they existed. “We are using neutron stars as detectors for primordial black holes,” says Loeb.

Pani and Loeb find that the prevalence of neutron stars in the Milky Way almost entirely closes the mass range left open by the 2013 study, meaning primordial black holes, even tiny ones, are unlikely to exist in numbers sufficient to explain dark matter.

“Most researchers have assumed dark matter is unknown particles, but there has always been this nagging possibility that it could all be black holes. This work appears to have removed this possibility,” says Jonathan Feng, who studies dark matter at the University of California, Irvine. Astrophysicist Agnieszka Cieplak of Brookhaven National Laboratory in Upton, New York, an author of the 2013 study, notes that although the mass window is all but closed, there is still a very tiny gap at just under the mass of the Moon, as the lower limit of the earlier study does not quite touch the upper limit of the present one.

Bernard Carr, a theoretical physicist at Queen Mary University of London, who worked with Hawking on the concept of primordial black holes, says although Pani and Loeb's argument involves complex calculations describing how they interact with neutron stars, it does appear that most possible masses for them are ruled out. ”For someone like me, who is keen to have primordial black holes as dark matter, it's a shame. On the other hand, it's important to know,” he says.