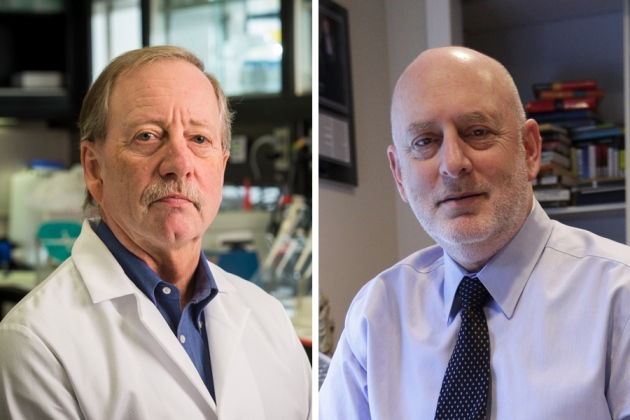 Steven Austad (left) is betting that 150-year-olds are alive today; Jay Olshansky (right) has bet against him.

Two US researchers have doubled their 16-year-old wager on whether anyone born before 2001 will reach the age of 150. The scientists have now staked US$600 on the question — but, if the fund in which the cash is deposited keeps growing at its current rate, the descendants of the victor could net hundreds of millions of dollars in 2150.

The friendly rivalry began in 2000, when Steven Austad, a biologist who studies ageing, was quoted in a Scientific American article1 with the provocative statement: "The first 150-year old person is probably alive right now." Jay Olshansky, another expert on ageing, didn't think so — and the scientists agreed to stake cash on the debate.

On 15 September 2000, the two put $150 each into an investment fund, and signed a contract stating that the money and any returns would be paid to the winner (or his descendants) in 2150. The bet also stipulates that Austad will only win if the 150-year-old is of sound mind.

Then last week, a paper in Nature2 suggested — from an analysis of global demographic data — that there may be a natural limit to human lifespan of about 115 years. Olshansky, at the University of Illinois at Chicago, wrote an accompanying commentary which argues that fixed genetic programs stand in the way of significant human life extension3. He says he believes a major breakthrough that will significantly extend human lifespan will occur within his lifetime, but that it will come too late to help those born before 2001 to reach their 150th birthday.

But Austad, at the University of Alabama, Birmingham, disagrees. “I’m more convinced than ever that I was correct in our original bet,” he says. He cites recent studies showing that a number of drugs, such as the immune-system suppressor rapamycin, can significantly extend lifespan in animals. And he points to the imminent start of a clinical trial called Targeting Aging with Metformin, or TAME, which hopes to show that a well-known diabetes drug can slow ageing.

Austad and Olshansky have now agreed to stake another $150 each. In 16 years, their original $300 stake has already grown to $1,275 (increasing by around 9.5% per year). If the topped-up fund maintains this average annual return, the winning pot could top $200 million by 1 January 2150. On that date, three scientists chosen by the president of the American Association for the Advancement of Science will determine the winner — although neither Austad nor Olshansky expects to be alive to find out.