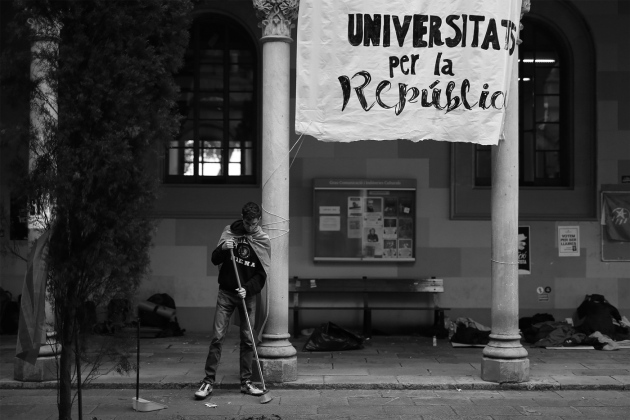 Uncertainty over the Catalan independence vote has unsettled scientists.

There has been a run on George Orwell’s dystopian novel 1984 in this era of alternative facts. Orwell also wrote the 1938 Homage to Catalonia, in which he described his admiration for the region’s distinct character. It, too, may be worth a reread.

The region’s centuries-long struggle for independence from Spain is in acute crisis. The Catalonian government in Barcelona is holding a referendum on the issue on 1 October. The central government in Madrid says the vote is illegal.

Reverberations from the chaotic stand-off can be felt even in research labs, where many scientists have told Nature they hold conflicting views: science would have a lot to gain from independence, but also a lot to lose.

Catalonia has upped its scientific game since the economic boom of the late 1990s. It created a handful of high-level research centres and an agency that recruits and pays the salaries of top scientists, who can choose their host Catalan institute or university. These moves, among others, have allowed Catalonia to overtake the rest of Spain in some measures of scientific achievement. In the most recent round of European Research Council (ERC) starting grants, for example, 10 of the 22 awarded to researchers in Spain went to the region, which is home to just 15% of the Spanish population. Of those ten, most of the recipients were foreigners, testimony to the region’s international attractiveness.

Many scientists believe that an independent Catalonia could change the scientific landscape even more fundamentally, not least by releasing universities from old-fashioned and inflexible national laws. Yet in the event of independence, Catalonia would automatically leave the European Union, and Spain would make sure it never got back in. That would weaken the region’s research. For one thing, it would no longer be allowed to host those plentiful ERC grants.

Still, many Catalan researchers say they will vote ‘yes’. Their emotions have only been fanned by Madrid’s move in mid-September to block the budgets of public bodies, including research institutes and universities, in an attempt to stop financing of the referendum.

The political uncertainty is likely to escalate whatever the result. And this is damaging. The independence debate has distracted Catalonian politicians from other issues, including science. Frozen budgets threaten the world-class status of the institutes that the region has so carefully built up — and that it will need, whatever political solution emerges.