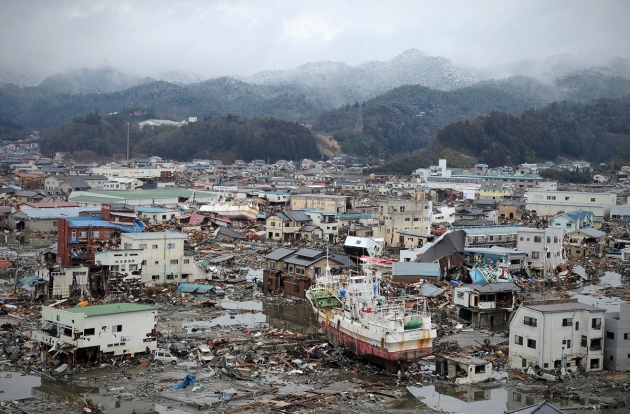 Patterns of tsunami damage in areas such as Kesennuma, northeast of Fukushima, reveal wave behaviour that could be used to improve defences.

The tsunami that crippled Japan’s Fukushima Daiichi nuclear plant almost a year ago was as formidable as initial estimates suggested, according to the first scientific assessment of its impact on the locale.

Surveys along 2,000 kilometres of coast have already generated the largest tsunami data set in the world. But no verified data have been obtained from the 20-kilometre-radius restricted zone around the shattered nuclear plant, where scientific fieldwork had previously been barred.

On 6 February, however, a seven-strong team set out on a two-day mission to determine the height and inland penetration of the waves that hammered the area less than an hour after a magnitude-9.0 earthquake struck off the coast of northeastern Japan. The team was led by Shinji Sato, a civil engineer at the University of Tokyo, and included two officials from the Fukushima prefecture and two local guides.

By recording the locations of ‘tsunami marks’ — water damage, debris and damage to trees, for example — the team confirmed previous estimates that the wall of water that hit the region was around three times taller than the 5.7-metre-high sea walls protecting the plant. The measurements are roughly consistent with the inundation height of 14–15 metres reported in April 2011 by the Tokyo Electric Power Company (TEPCO), which operates the damaged reactors. The team was not given permission to get closer than two kilometres from the plant, however.

In the central part of the restricted area — around the towns of Futaba, Okuma and Tomioka — tsunami heights were generally greater than 11 metres, with a maximum of 21 metres, measured at a cliff-top site north of the plant. Finding reliable tsunami marks almost a year after the disaster was a challenge, says Harry Yeh, a civil engineer at Oregon State University in Corvallis, who has been studying tsunami impacts for 20 years and was a member of the team. In places, the tsunami had wiped out almost everything that stood. Elsewhere, the Japanese Self Defense Force had removed large pieces of debris that may have borne tsunami marks as it attempted to find victims of the disaster.

But in other places, the flooding left buildings unscathed. Apart from a dent in its metal chimney, the gymnasium of Ukedo Elementary School in Namie — less than 5 kilometres from the nuclear plant — looked almost orderly, Yeh recalls. Graduation banners still decorated the walls inside, and a small Japanese flag was unharmed. At a restaurant in the town, the team found a pristine newspaper dated 11 March 2011 — the day of the earthquake. The team was also surprised by a herd of cows that had apparently survived the tsunami and adapted to the abandoned environment. “I often scratched my head at the juxtaposition of utter devastation and relative intactness,” says Yeh.

The team eventually identified tsunami marks at 27 sites in the 1,256-square-kilometre restricted zone. “Nobody else has obtained this kind of information,” says Philip Liu, a tsunami researcher at Cornell University in Ithaca, New York, who was not involved in the survey. “It’s valuable evidence of how the tsunami has behaved.”

Yeh and his colleagues will use the data to refine simulations of how the contours of the coast and sea bed shaped the tsunami. Some scientists believe that the tsunami that struck Fukushima was the amalgamation of two waves, one coming from the north and one from the south. The simulation should inform this hypothesis, and could therefore help to improve tsunami defences for the future.

Liu adds that the data could also be used to improve simulations of how high the wave was when it hit the plants, which would help to improve protection measures for nuclear plants. “It is a pity they couldn’t take measurements at the plants themselves,” says Liu.