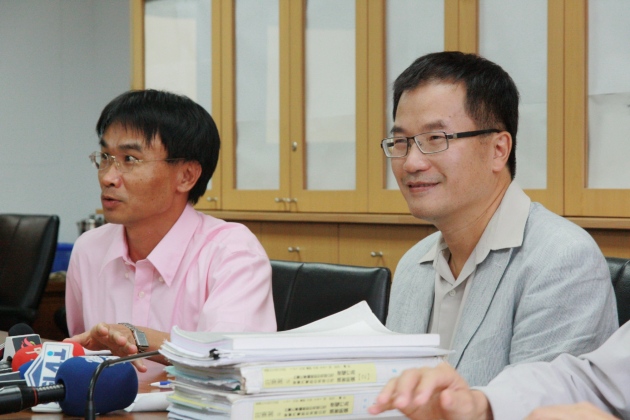 Ben-Jei Tsuang (right) held a press conference today after a court sided with him against a petrochemical company.

A Taiwanese environmental engineer sued for suggesting a link between a petrochemical company's emissions and cancer rates was today cleared of libel by a court.

In April 2012, Formosa Plastics Group (FPG) filed a civil suit for a tort claim and a criminal suit for defamation against Ben-Jei Tsuang, who works at National Chung Hsing University (NCHU) in Taichung, Taiwan. Tsuang had presented evidence suggesting increased cancer risk in the vicinity of an FPG hydrocarbon-processing facility in Mailiao. His results were displayed at a scientific meeting in 2010 and in a press conference in 2011, and he has since submitted a paper to Atmospheric Environment.

FPG, which is based in Taipei, demanded that Tsuang pay US$1.3 million in damages and publish a statement of apology in four major newspapers. More than 1,000 academics, among them chemistry Nobel laureate Lee Yuan Tseh, expressed their support to Tsuang in an open letter (in Chinese).

Earlier today, judges at the Taipei District Court ruled against the plaintiffs' claims and announced that they would dismiss the criminal suit. Tsuang’s declarations were “fair comments on a fact subject to public criticism”, the court wrote in a press release explaining its reasoning.

After the decision, Tsuang held a press conference at NCHU and said the outcome was a milestone for academic freedom in Taiwan. “However, the litigation has already caused some chilling effects: my students dare not to mention the polluting corporations by name even when they have already been fined by the government for violating pollution-control regulations,” Tsuang told Nature.

The court is expected to deliver its official motivation in the civil case in the next few weeks, after which FPG will have 20 days to appeal. “We hope that FPG will stop its harassment against the professor: they have more than enough money to fund research to rebut his findings, rather than use litigation,” Severia Lu, one of Tsuang’s lawyers, told Nature.

FPG’s offices in Taiwan and those of its lawyers were closed when Nature tried to contact them, and its press office in New Jersey addressed Nature to its Taiwan offices.

In the United Kingdom, libel law was recently reformed following a campaign that was supported by Nature.