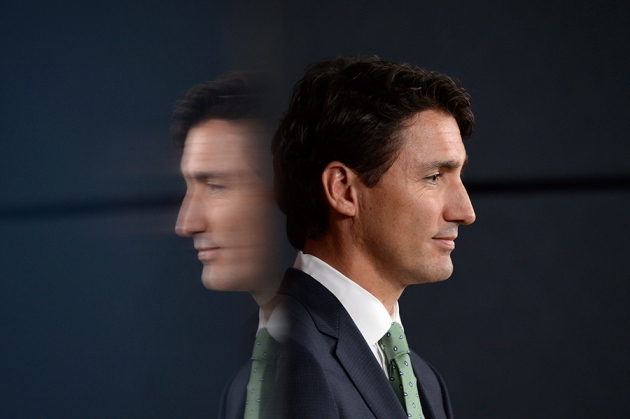 Prime Minister Justin Trudeau has yet to tackle some of the thorniest science-policy issues in Canada.

It didn’t take long for Canada’s Prime Minister Justin Trudeau to send scientists swooning. Within days of taking office on 4 November 2015, the middle-left Liberal relaxed restrictions on government scientists’ ability to speak to the press and the public, and reinstated a long-form census prized by social scientists. A year on, Trudeau has boosted science budgets and restored some research jobs cut by his Conservative predecessor, Stephen Harper.

“The sun has peeked through some of the clouds,” says Paul Dufour, a science-policy analyst at the University of Ottawa. “The dark prince has left.”

Yet many in Canada’s science community say they are reserving judgement, waiting to see whether Trudeau can sustain his string of victories as he tackles some of country’s thorniest science-policy issues. Among them are revisions of processes ranging from environmental regulations to Canada’s system for doling out research grants.

Kathleen Walsh, executive director of the non-profit science-advocacy group Evidence for Democracy in Ottawa, worries that some of the Trudeau government’s environ-mental policies may favour style over substance. Take the prime minister’s decision to put a price on carbon — starting at Can$10 (US$7.5) per tonne in 2018 and rising to Can$50 per tonne in 2022. Environmentalists and economists say that those prices are too low to achieve Canada’s goal of reducing its greenhouse-gas emissions by 30% below the 2005 level by 2030. Many also see that emissions goal, set by Harper, as lacklustre.

And Trudeau has not broached harder subjects, such as fulfilling a campaign promise to phase out fossil-fuel subsidies. “The Trudeau government has squandered an opportunity for effective national action,” says Douglas Macdonald, an environmental-policy expert at the University of Toronto.

The prime minister’s first budget, released in March, brought good news for scientists: an increase of roughly Can$95 million for the country’s research councils — more than twice the 2015 boost (see ‘Budget boost’). But there are still grumbles about how research councils’ funds are apportioned. “A lot of money is going to large institutions,” says Walsh. “Your everyday scientists in everyday labs are still struggling.” 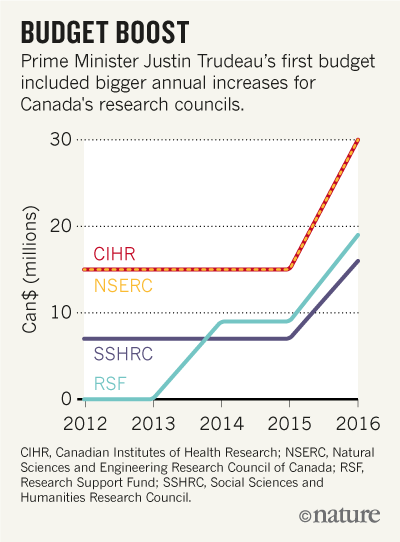 Earlier this year, health scientists cried foul over reforms to the Canadian Institutes of Health Research (CIHR) system for awarding grants. Researchers complained that the measures, including a switch to online peer review, made reviews less effective and put early-career scientists at a disadvantage. More than 1,000 researchers signed a letter demanding changes; in September, the CIHR launched an international review of its grant processes.

A broader examination of the government’s science-funding system, called the Fundamental Science Review, began in June. Science minister Kirsty Duncan says that the government has received more than 1,200 public comments, and a final report on the review is due by early 2017 at the latest.

The Trudeau government is also re-examining Harper’s changes to fisheries and environmental-assessment laws, with recommendations due by early 2017. In the meantime, controversial projects such as a natural-gas plant on the British Columbia coast are receiving government approval. “There is a rush by companies to get hearings over and the necessary papers in place before [environmental assessment] regulations are strengthened,” says David Schindler, an ecologist at the University of Alberta in Edmonton.

Trudeau’s main campaign promise to scientists was to reinstate evidence-based decision-making. To that end, jobs are being restored to some government research departments after a loss of roughly 1,800 positions during the Harper administration — 344 of those at the agency Environment Canada alone. Now, the department of fisheries and oceans is hiring 135 scientists. And the Professional Institute of the Public Service of Canada, a union that represents government workers, wants the administration to hire 1,500 extra scientists next year.

Many researchers are waiting for Trudeau to deliver on his promise to install a chief science officer to keep science at the heart of governance. That position is still in the planning stage, and Duncan would not comment on when an appointment would be made.

“We’re kind of still in the honeymoon period,” says Dufour. “Everyone is willing to give the government some long string. But at some point they’re going to have to take some actual action.”