Ross Mounce knows that when he shares his research papers online, he may be doing something illegal — if he uploads the final version of a paper that has appeared in a subscription-based journal. Publishers who own copyright on such papers frown on their unauthorized appearance online. Yet when Mounce has uploaded his paywalled articles to ResearchGate, a scholarly social network likened to Facebook for scientists, publishers haven’t asked him to take them down. “I’m aware that I might be breaching copyright,” says Mounce, an evolutionary biologist at the University of Cambridge, UK. “But I don’t really care.”

Mounce isn’t alone in his insouciance. The unauthorized sharing of copyrighted research papers is on the rise, say analysts who track the publishing industry. Faced with this problem, science publishers seem to be changing tack in their approach to researchers who breach copyright. Instead of demanding that scientists or network operators take their papers down, some publishers are clubbing together to create systems for legal sharing of articles — called fair sharing — which could also help them to track the extent to which scientists share paywalled articles online.

Free article sharing is embedded in the way science works, says Mandy Hill, managing director of academic publishing at Cambridge University Press, UK. “It is important that, as publishers, we accept this and find ways to support fair sharing of content whilst ensuring the sustainability of the research publishing business,” she says.

But open-access advocates say that publishers’ plans for fair sharing will not satisfy scientists who might object to — or be unaware of — copyright restrictions, and who increasingly expect to be able to make their papers available online for free.

The practice of uploading paywalled papers online seems to have ballooned in recent years — in large part because of the popularity of sites such as ResearchGate, where millions of scientists share and view articles. Publishers are watching carefully. In April, a publisher-commissioned survey of more than 5,000 scientists by the research-impact service Kudos in Wheatley, UK, suggested that 57% had uploaded their own work to scholarly communication networks; 79% of those said they checked copyright policies before they did so, but 60% thought they should be allowed to upload their articles regardless of publisher or journal policies (see ‘Copyright concerns’). 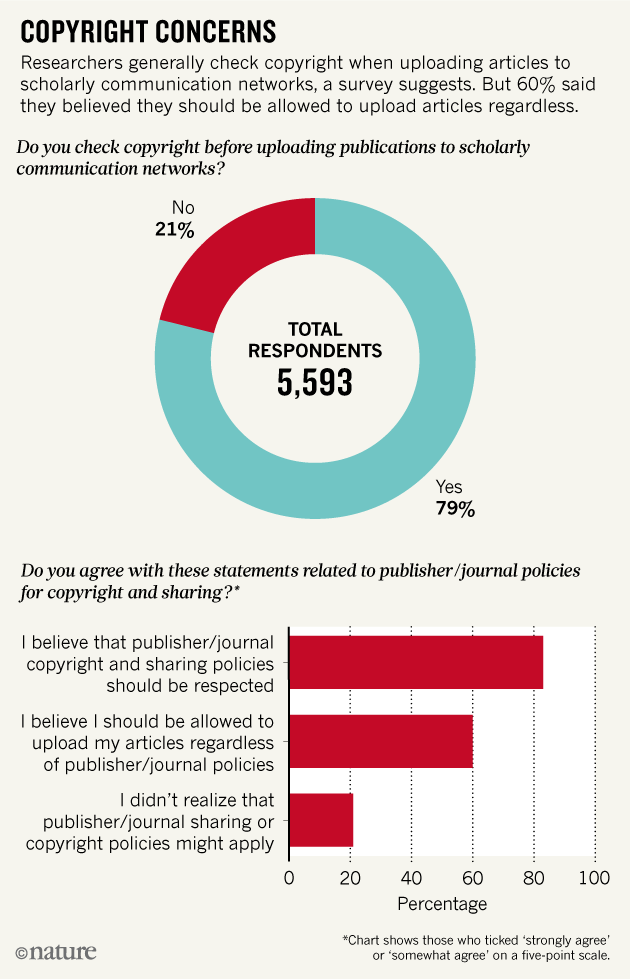 No-one knows the full extent to which researchers share paywalled papers online, but a study this February gave a hint. Information scientist Hamid Jamali at Charles Sturt University in Wagga Wagga, Australia, picked 500 papers at random from ResearchGate, and found that 392 were not open-access articles (H. R Jamali Scientometrics http://dx.doi.org/10.1007/s11192-017-2291-4; 2017). Some were versions that publishers allow authors to share, such as a peer-reviewed, unedited manuscript or a preprint. But more than 50% of the uploaded versions infringed publishers’ copyright, Jamali found.

A spokesperson for ResearchGate, which is based in Berlin, says that the company explicitly asks users to comply with publishers’ policies when uploading papers, and to make sure they are not breaching copyright. But it says it has no way to monitor the extent to which users might upload unauthorized papers.

Some scholarly publishers have reacted to the issue with litigation threats. In late 2013, for instance, science publisher Elsevier sent 3,000 notices under the US Digital Millennium Copyright Act to the scholarly network Academia.edu and other sites, demanding that they take down papers that breached Elsevier’s copyright. The notices were also passed to individual scientists. Major infringements still prompt a legal reaction: Elsevier is currently suing Sci-Hub, a site that shares millions of paywalled research papers.

Yet, when it comes to dealing with papers shared on social networks, some publishers are pulling back from litigation, says Matt McKay, a spokesperson for the International Association of Scientific, Technical and Medical Publishers (STM) in Oxford, UK. “Legal action and take-down notices are no sustainable manner to remove unauthorized content from social research networks. Rather than relying on such blunt tools, we want to talk with these sites and find long-term solutions to the problem,” he says.

In a 21 March teleconference organized by the STM, science publishers discussed efforts to let scientists share full texts of papers more easily without breaching copyright. (Springer Nature, which publishes Nature, was one of the companies involved; Nature’s news team is editorially independent of its publisher.)

Publishers contacted by Nature’s news team generally declined to discuss their evolving policies on article sharing in detail, but fair sharing typically means providing free links to the final versions of read-only, non-downloadable articles hosted on journal sites. Some publishers — including Springer Nature and Wiley — have adopted software that allows their authors to generate such links.

An education drive in 2015 kicked off the fair-sharing discussion: the STM, following consultations with publishers and librarians, developed a website called ‘How can I share it?’ (www.howcanishareit.com) that details what different subscription journals allow in terms of archiving and sharing copyrighted articles online. (In general, many publishers permit the online sharing of peer-reviewed manuscripts, but not the final full text.)

Scientists may not like publishers’ systems for fair sharing, says Stevan Harnad, a web-science and cognition expert at the University of Southampton, UK, who encourages researchers to self-archive versions of articles online. “So publishers want to track what is happening? There is no reason they should retain such control,” he says.

In the long run, thinks Mounce, science will move to a system in which researchers can do what they want with their papers. “Only open access will cleanly and clearly solve the highly artificial ‘problem’ of not being allowed to share research with others,” he says.

But for the publishing industry, the question of how to enable sharing of paywalled articles without breaching copyright or alienating authors will only grow in significance, says Joseph Esposito, an independent publishing consultant in New York City who works with science publishers and scholarly societies. So far, he says, journal publishers don’t seem to have lost much revenue because of scholarly networks. But publishers will have to adopt new strategies now to avoid “substantial losses” in the near future, he says.