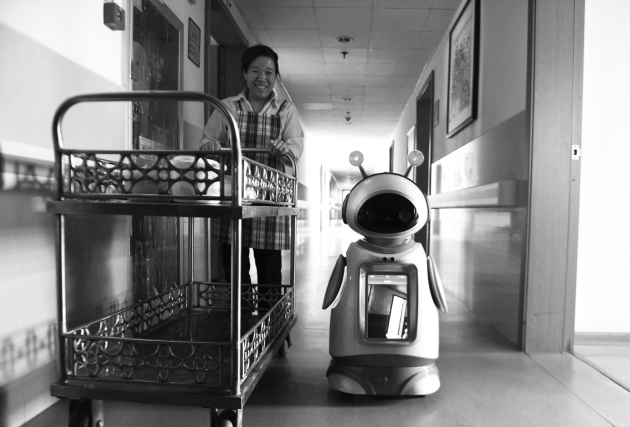 Automation will take away jobs, but a bigger question is how many it will generate.

In 2014, the Los Angeles Times began beating its rivals to report earthquakes, using an algorithm to convert announcements from the US Geological Survey (USGS) to breaking news within a few minutes. This June, it announced that a magnitude-6.8 quake had shaken Santa Barbara, California. That was certainly news to the distinctly unshaken residents of Santa Barbara; the earthquake the newspaper was reporting on had actually happened in 1925. The paper’s Quakebot had misinterpreted an update to the USGS seismic database and published its story online without anyone checking. The story was deleted and Santa Barbarans (and human journalists everywhere) could breathe a sigh of relief.

The tale encapsulates many of the issues that surround the intensifying debate about the roles of computers and humans in the workplace of the future — both the very near and the very far. Much of that debate places people and algorithms in direct competition. From lorry drivers threatened by self-driving vehicles to doctors who could be replaced by know-it-all diagnostic devices, many jobs as we know them could be done by artificial intelligence (AI) systems.

In an Editorial last year on the likely role and risks of AI in future society, Nature noted that even academic debate on the topic is polarized between sceptics and fanciful futurists (see Nature 532, 413; 2016). In a special issue this week, we try to find and explore some middle ground, by bringing together and assessing the evidence on how automation will affect the future of work.

In a sense, this debate is nothing new. Technology and automation have been putting people out of jobs for hundreds of years, as historian Robert Allen discusses in a Comment. So have other factors — chiefly economic trends and globalization. But the spread of technology has also created new roles. In broad terms, as manufacturing jobs in the West have been transferred to low-wage economies elsewhere, politicians and economists have looked to tech to help fill the gap. These new industries, they argue, both need direct labour to develop them and create employment indirectly through the need for service and support. But will this trend continue? The true debate over the future of work is not whether computers will replace people in many jobs — they surely will — but whether they are team players. For how long will Quakebot and its descendants need a human supervisor?

Both sceptics and fanciful futurists will find something to agree and disagree with in the articles that follow. In a Comment, Yuval Noah Harari, historian and best-selling author of Sapiens (Harper, 2014) and Homo Deus (Harvill Secker, 2015), argues: “The challenges posed in the twenty-first century by the merger of infotech and biotech are arguably bigger than those thrown up by steam engines, railways, electricity and fossil fuels.” He also offers re­assurance about job prospects for some people, from a perhaps unlikely source. Each US military drone flying over Syria keeps 110 people in a job, he writes — 30 operators and 80 analysts to process the information it sends back. This is not an argument for more drones, the use of which is controversial. But, as Harari writes: “A careful study of the military job market might tell us a lot about potential future developments in the civilian economy.”

Careful study, Nature naturally argues, is something that (human) scientists and other academics excel at. As the 2016 editorial put it, “it is crucial that progress in technology is matched by solid, well-funded research to anticipate the scenarios it could bring about”, such as impacts on mental health and management, and how humans interact with robots. It’s important, too, to study possible political and economic reforms that will allow those usurped by machinery to contribute to society.

“The true debate is not whether computers will replace people, but whether they are team players.”

The Oxford Martin Programme on Technology and Employment at the University of Oxford, UK, is doing just this (see go.nature.com/2xxauvm). Oxford economist Ian Goldin offers his own thoughts.

Among the topics worthy of examination is the future fate of science and scientists. So far, the application of technology and automation to research has fuelled, and not felled, the need for human support. Indeed, fields such as bioinformatics exist only because of the work that computers generate for scientists. But as explored in a Careers Feature, science is not immune from the gig economy — short-term employment on specialist tasks such as writing a literature review or managing a database. The trend towards parcelling off and even publishing science as a series of steps rather than full papers could see demand for freelance services rise. (The breakdown of complex tasks into a series of simpler steps is, of course, also a proven path to automation.)

Still, browse ‘help needed’ adverts for scientific gigs and the future looks less rosy. As little as US$80 to perform a detailed meta-analysis of published studies? It’s hardly worth even plugging in for that.