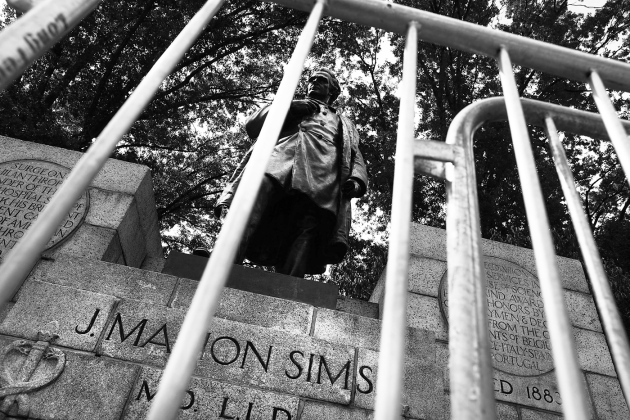 Update: A full statement discussing this Editorial and highlighting fundamental flaws has been published by Philip Campbell, Editor-in-Chief of Nature (Nature 549, 334; 2017).

Editor's note: The original version of this article was offensive and poorly worded. It did not accurately convey our intended message and it suggested that Nature is defending statues of scientists who have done grave injustice to minorities and other people. We have corrected the headline, standfirst and a line in the text to make clear we do not support keeping those memorials; our position is that any such memorials that are allowed to stand should be accompanied by context that makes the injustice clear and acknowledges the victims.

We apologise for the original article and are taking steps to ensure that we do not make similar mistakes in the future. We realise that many people disagree with the article more fundamentally; we will be publishing some of the strong criticisms that we have received and welcome further responses.

The statues of explorer Christopher Columbus and gynaecologist J. Marion Sims stand at nearly opposite corners of New York City’s Central Park, but for how much longer? Both monuments have been dragged into a nationwide debate about memor­ials to historical figures who have questionable records on human rights. The arguments are long-standing, but were thrown onto the world’s front pages last month when protests against the removal of a statue of Confederate General Robert E. Lee in Charlottesville, Virginia, produced racially charged violence.

Last week, the Central Park Sims statue — one of many that stand in numerous US cities — was vandalized. The word ‘racist’ was spray-painted alongside his list of achievements, which include life-saving techniques he developed to help women recover from traumatic births. Yet many protest about the lionization of this ‘father of modern gynaecology’ because he performed his experiments on female slaves.

Sims is not the only scientist whose long-dead head is on the block and whose achievements, and the circumstances around them, are being revisited from the twenty-first century. Institutions in the United States have struggled with the case of Thomas Parran, the US surgeon general who oversaw the infamous Tuskegee study that ran between 1932 and 1972. The researchers enrolled hundreds of African American men who had syphilis, but did not inform them that they had the infection and withheld treatment in an effort to monitor how the disease progressed.

A similar study on Parran’s watch happened between 1946 and 1948 in Guatemala, when more than 1,300 people were intentionally infected with diseases including syphilis. The study was not made public until historian Susan Reverby stumbled across research records in 2005. Both studies were performed surreptitiously, as though their perpetrators suspected that what they were doing could be perceived as immoral. The US government has formally apologized for the way in which both studies were conducted.

In 2013, after lengthy debate, the American Sexually Transmitted Diseases Association voted to rename its prestigious Thomas Parran award. “Many [members] were concerned that continuing to offer the Parran award may give the appearance of tacit approval of unethical research,” the society said in a statement. The University of Pittsburgh in Pennsylvania is similarly debating whether to rename its Parran Hall (Parran worked at the university after his stint as surgeon general).

Defenders of controversial historical figures argue that they should be judged by their achievements rather than by modern norms. Sims was far from the only doctor experimenting on slaves in 1849, despite the fact that the abolitionist movement was well under way in the United States. And his achievements saved the lives of black and white women alike. But some historians argue that his experiments could have been considered unethical even for his time.

Europe has struggled with these issues for even longer than the United States. After some debate, Oriel College at Britain’s University of Oxford last year decided to keep a controversial statue of Cecil Rhodes, the nineteenth-century businessman and committed imperialist.

“In cases where painful reminders are allowed to stand, they could be supplemented.”

After the Second World War, cities and institutions were left with streets, buildings, statues and other memorials that were named after people who collaborated with the Nazis or were at least sympathetic to the regime. And in Canada earlier this month, Montreal decided to rename streets and parks named after French Nobel laureate Alexis Carrel, who supported enforced sterilization and eugenics. Other cities in France have already wiped his name from their maps.

Erasing names, however, runs the risk of whitewashing history. Germany’s Max Planck Society — formerly the Kaiser Wilhelm Society — deserves credit for its public acknowledgement that many prominent members worked with the Nazi regime and that the society did not help to protect Jewish scientists.

In cases where painful reminders are allowed to stand, they could be supplemented. Such notes are also standard in biomedical literature. The American Medical Association recommends that if unethically acquired data are essential to science, any use or citation of these data should describe the unethical behaviour and pay respect to the victims of the experimentation.

Institutions and cities could do something similar by installing a plaque noting the controversy, or an equally sized monument commemorating the victims. Such a historical marker stands for Carrie Buck, a young woman who was the first person to be sterilized under a 1924 eugenics programme in the United States, which was designed to eliminate ‘genetically inferior’ people with mental and physical disabilities. It stands in Charlottesville just a few blocks — but a million miles away — from the disputed statue of General Lee.

A full statement discussing this Editorial and highlighting fundamental flaws has been published by Philip Campbell, Editor-in-Chief of Nature (Nature 549, 334; 2017).

In its original format, this Editorial wrongly implied that Nature supports retaining statues of historical figures whose work harmed others. This is not the case. We have changed the headline from “Removing statues of historical figures risks whitewashing history” to read “Science must acknowledge its past mistakes and crimes”, and the standfirst from “Science must acknowledge mistakes as it marks its past” to “Injustice in the name of research should not be forgotten — nor should those injured by scientists”. In addition, we have changed the first line of the penultimate paragraph from “Instead of removing painful reminders, perhaps these should be supplemented” to read “In cases where painful reminders are allowed to stand, they could be supplemented”.